Chinese authorities require Uyghurs to declare loyalty to the State to qualify for government aid.
2012-07-27
Tweet 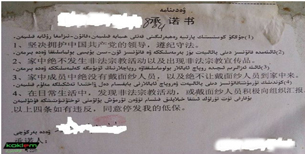 A copy of the document applicants must sign to receive welfare from the government.
Photo courtesy of Istiqlaltv.com

Authorities in northwestern China are requiring ethnic Uyghurs from impoverished communities to sign pledges affirming their allegiance to the ruling Chinese Communist Party and curtailing their religious freedom in exchange for welfare money, according to a Uyghur media organization in exile.

RFA’s Uyghur service obtained a document from the Turkey-based Istiqlaltv.com which is written in Chinese and Uyghur and which lists a number of conditions aid recipients must honor to qualify for receiving a monthly stipend from the Chinese government.

The document, which Istiqlaltv.com says was distributed in primarily Uyghur-populated areas of the Xinjiang Uyghur Autonomous Region, such as the southwestern cities of Hotan, Aksu, and Kashgar, offers a “basic living fee” to unemployed residents of 200-300 yuan (U.S. $31-47) per month.

To qualify for the welfare, applicants must sign the pledge, promising to “firmly uphold the leadership of the Chinese Communist Party, follow regulations, and be a law-abiding citizen.”

And lastly, the welfare applicants must pledge that if they witness illegal religious activities or women covering their faces, they should “report it to the local authorities immediately.”

“If I violate any of the above four regulations, I agree to stop receiving my [government-provided] basic living fee,” the document states, above a section requiring the applicant’s signature and date of application.

A Uyghur source in exile, who now lives in Turkey and who spoke on condition of anonymity, noted that no previous government controlling the Xinjiang region, including the nationalist Kuomintang, the Manchurian Qing Empire, or any former warlord rulers, had ever used such a tactic to “subjugate” the local populace.

“The Chinese fear the Uyghurs because we have the moral high ground,” he said, reflecting commonly held views that the Uyghur community has long suffered ethnic discrimination, oppressive religious controls, and continued poverty and joblessness under Chinese rule.

“They believe that we will rise up with great determination because of this, so they are aiming to destroy the religious traditions of the local people.”

The source said that many Uyghur communities in Xinjiang have little to show in exchange for Beijing’s ambitious programs to develop China’s vast northwestern frontier.

“They have already taken our land, economy, and our language. Now they will take our beliefs.”

This is state commandism with CCP characteristics. Declare your allegiance to the ruling party and your disapproval of "illegal religious activity" or else have your government benefits cut or lose your government job. The manipulative and grossly intrusive nature of the regime is again revealed.