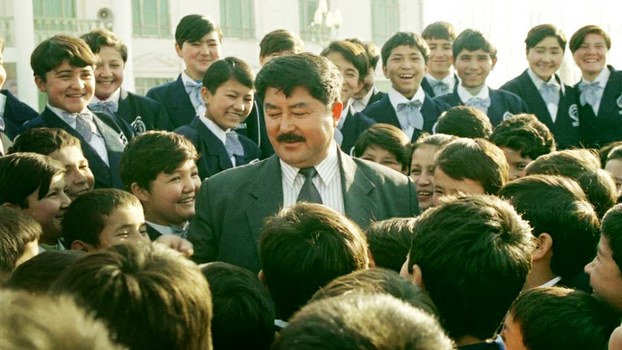 Nurtay Hajim talks with students at the Nurtay Iskender School for Orphans in Ghulja city, in an undated photo.

Authorities in northwest China’s Xinjiang Uyghur Autonomous Region (XUAR) have detained a well-known Uyghur philanthropist who housed the children of political prisoners, according to sources that said he may have been sentenced to nearly two decades in jail.

Nurtay Hajim, who is in his 60s, amassed a fortune through an international tourism and shipping firm he set up shortly after China expanded trade relations with the nations of Central Asia in the early 1990s.

According to a report published on China’s Sina.com, Hajim invested 3.8 million yuan (U.S. $548,700) in 2007 to launch the Nurtay Iskender School for Orphans, which offers free accommodation, food and education for 150 Uyghur children whose parents have died and other kids who lack guardians, from across the XUAR.

The businessman, who is admired in the Uyghur community for his generosity, has provided an annual donation of some 1.15 million yuan (U.S. $166,000) to the school to cover the costs of its students.

A Uyghur source from the XUAR recently told RFA’s Uyghur Service that Hajim had been taken into custody by local authorities shortly after returning to Ili Kazakh (in Chinese, Yili Hasake) Autonomous Prefecture’s Qorghas (Huocheng) county from a business trip to neighboring Kazakhstan.

“I saw him in April, when he drove across the Qorghas border into our homeland,” said the source, who spoke on condition of anonymity.

“Not long after he returned to our country, he was detained.”

The source said that Hajim’s family was never informed of his detention, and knew nothing of his whereabouts, although a rumor began to circulate in June that he had been sentenced to prison.

“I heard that he was escorted to his trial with a chain around his neck like a dog and was given an 18-year prison sentence,” the source said.

“I contacted his family to find out more information, but none of them dared to speak to me or to reveal anything.”

An officer at the Harambagh district police station, in Ili Kazakh’s Ghulja (Yining) city, told RFA that Hajim had been arrested by authorities from neighboring Ili River district, where the Nurtay Iskender School for Orphans is located.

When asked how many years in prison Hajim had been sentenced to, the officer said his department “cannot give you that information.”

The Nurtay Iskender School for Orphans “has been closed down,” he added.

The officer refused to comment when asked whether Hajim had been sentenced because his school had accepted the children of Uyghurs who were serving time in jail, and deferred further questions about the businessman’s case to the Ili River district police station.

When asked whether Hajim had been sentenced, the supervisor said the trial took place “four months ago,” but was unable to provide further details.

The supervisor noted that 74 Uyghur businessmen had been tried in Ghulja city in recent months, but said he was unaware whether the cases were related to each other or to that of Hajim.

Last month, sources told RFA that authorities had shuttered all branches of the popular Miraj Restaurant in the XUAR capital Urumqi because it promoted Uyghur cultural identity after the detention in May of owner Abdureshit Hoshur Haji, his brother Ablimit Hoshur Halis Haji—a prominent philanthropist—and two of Hoshur Haji’s business partners for their purported ties to a Uyghur education fund.

Halis Haji, the source said, was detained because of his establishment in 1994 of the Halis Foundation, a charitable organization whose goal was to help elite Uyghur students attain higher education and financial aid for study abroad.

The Halis Foundation was initially viewed favorably by local officials, but authorities forced its closure in the aftermath of the Feb. 5, 1997 Ghulja Incident—protests sparked by reports of the execution of 30 Uyghur independence activists that were violently suppressed by authorities, leaving nine dead, according to official media, though exile groups put the number at as many as 167.

After closing the foundation, authorities froze its assets and placed Halis Haji under supervision, he said, and the four men may have been accused of hiding the organization’s remaining money.

Beginning in April 2017, Uyghurs accused of harboring “strong religious views” and “politically incorrect” ideas have been jailed or detained in re-education camps throughout the XUAR, where members of the ethnic group have long complained of pervasive discrimination, religious repression, and cultural suppression under Chinese rule.

While Beijing initially denied the existence of re-education camps, the Uyghur chairman of Xinjiang’s provincial government, Shohrat Zakir, told China’s official Xinhua news agency last month that the facilities are an effective tool to protect the country from terrorism and provide vocational training for Uyghurs.

This week in Geneva, China is likely to face a grilling on the Uyghur camps from some Western countries at the United Nations Universal Periodic Review (UPR) of its human rights record.

Adrian Zenz, a lecturer in social research methods at the Germany-based European School of Culture and Theology, has said that some 1.1 million people are or have been detained in the camps—equating to 10 to 11 percent of the adult Muslim population of the XUAR.

Chinese communist pigs are the biggest threat to human rights. They will pay the price one day. I don’t know how this inhuman species become so powerful these days.

Muslims are the greatest threat to real humans. Just look at how the Muslims in Pakistan threaten to kill Asia Bibi a Christian woman for blasphemy of the stupid religion of peace. Take another look at how Muslims in Indonesia throw the former Christian governor of Jakarta into jail again for blasphemy. China is doing the right thing to the Muslims and should cross border to fix them up because the rest of the world like the West have no clue as to what to do to the Muslim terrorists in their midst.