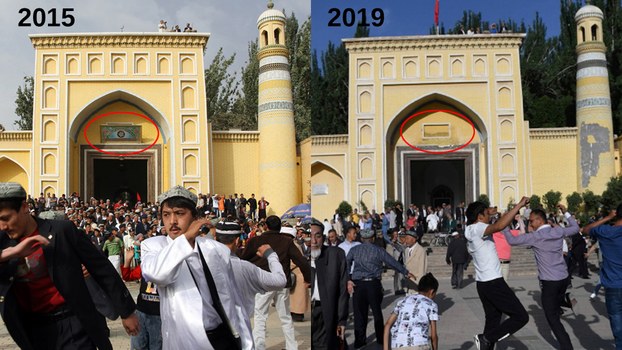 Side-by-side images show Kashgar's Id Kah mosque in 2015 and in 2019, after the removal of the plaque and the star-and-crescent structures from the tops of the its dome and minarets.

Since 2016, the Chinese authorities have been systematically destroying mosques, cemeteries, and other religious structures and sites across the Xinjiang Uyghur Autonomous Region (XUAR). Last year, the Washington-based Uyghur Human Rights Project (UHRP) published a report detailing this campaign, titled “Demolishing Faith: The Destruction and Desecration of Uyghurs Mosques and Shrines”; the report was referenced in the 2020 annual report of the United States Commission on International Religious Freedom (USCIRF). The report uses geolocation and other techniques to show that anywhere between 10,000 and 15,000 mosques, shrines, and other religious sites in the XUAR were destroyed between 2016 and 2019. In some cases, only the domes and towers were destroyed from certain structures, while in others, characteristically Islamic elements such as stars and crescents, domes, and scripture plaques were removed. In some cases, entire mosques have also been felled.

China has made no official response to the report or to claims about the large-scale and widespread destruction it has undertaken. However, the Chinese authorities have continued to bring international visitors to mosques such as Id Kah in Kashgar, as well as to other religious sites around the region, and to publish articles depicting the mosque in state-run media, all in support of the official line that Uyghurs enjoy religious freedom in the region.

Id Kah is the largest and oldest mosque in the XUAR and the largest mosque in all of China. Uyghurs have long regarded Id Kah as a symbol of Islamic culture and a representative of Islamic architecture in the region. While the mosque is still standing mostly intact today, there are some very alarming signs that it is merely a shell of what it used to be. In 2018, authorities removed the star-and-crescent structures from the tops of the mosque’s dome and minarets, along with the colorful scriptural plaque that long hung above its front entrance. As of 2020, those features appear not to have been restored to the mosque. The plaque, which dates to hijra 1325 (1908 C.E.) contains Quranic scriptures along with information about the construction of the mosque and the identity of the artist who made the sign.

Ahead of Eid al-Fitr, which on May 23 will mark the end of the Islamic holy month of Ramadan, RFA’s Uyghur Service spoke with Turghunjan Alawudun, director of the Religious Affairs Committee for the Munich-based World Uyghur Congress (WUC) exile group, and Henry Szadziewski, a senior researcher with the UHRP, about the significance of the missing plaque. 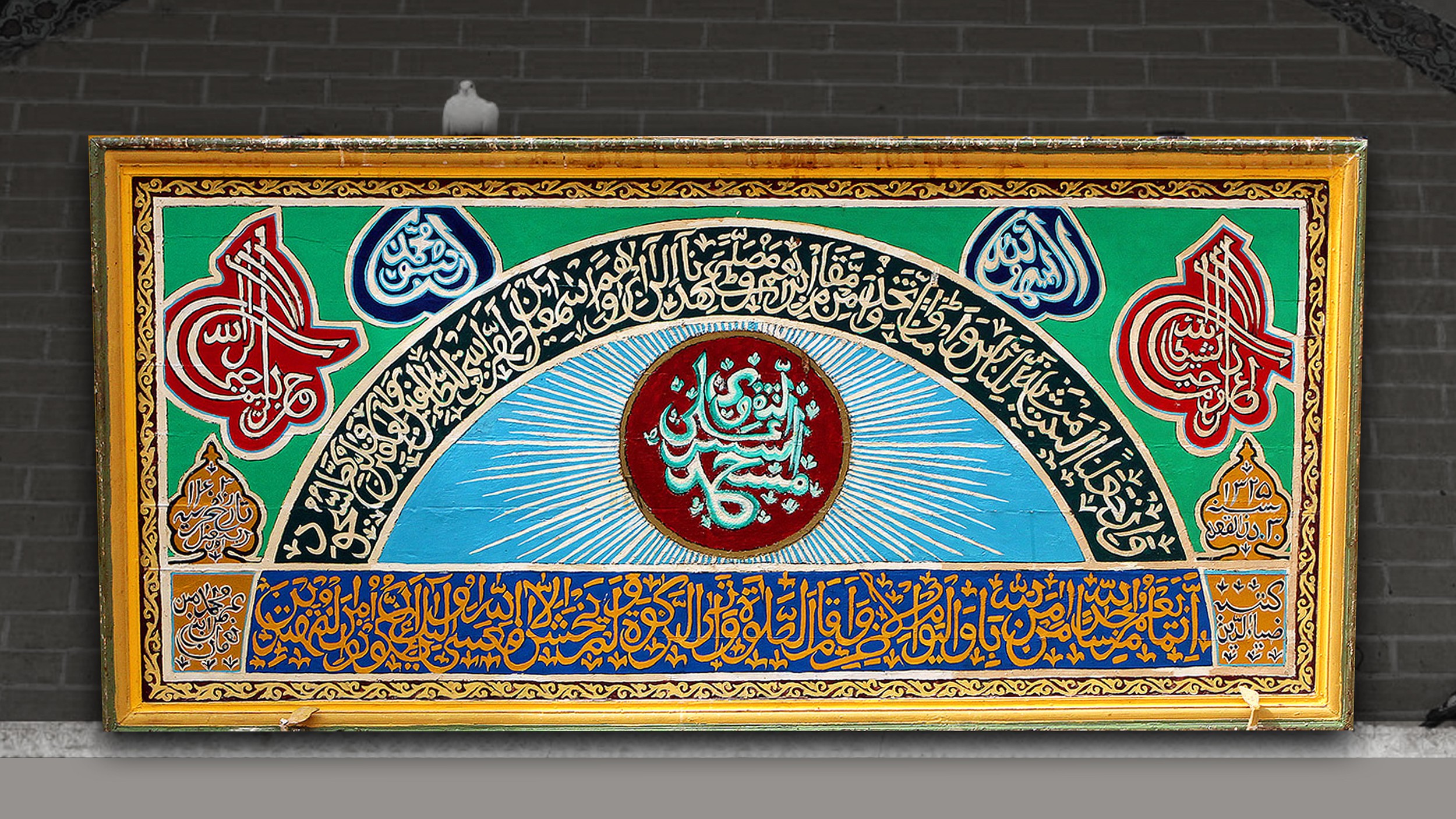 A close up view of the plaque adorning the front entrance of Id Kah mosque, taken before its removal. RFA

Alawudun: The disappearance of the scriptural plaque from the entrance to Id Kah is one aspect of the Chinese regime’s evil policies meant to eliminate the Islamic faith among Uyghurs, to eliminate Uyghur faith, literary works, and language—and Uyghurs themselves. This scriptural plaque above the door into Id Kah, like the [mosque’s] minarets, has an Islamic character and is a symbol that has been there from the founding of the mosque until today. The Chinese regime can’t bear this, it can’t stand it, and the inner hatred they feel toward Uyghurs has boiled over such that they had the plaque removed.

They’ve left Id Kah [itself] there for the international community, as part of a bid to fool the world. By taking visitors from Islamic countries there every once in a while to see it, showing it to international visitors who come to investigate [the situation in the region], and sharing it in the media every now and then, they’re pursuing policies that deceive the world. Even so, we can still see that the cruel things that China is doing—the destruction by the Chinese regime of things connected to Uyghurs, Uyghur culture, symbols of the Uyghur people, expressions of Uyghur culture—are signs of the Chinese regime’s horrible plan to eliminate the Uyghurs.

Szadziewski: Religious freedom is not a reality for Uyghurs. Across their homeland, mosques, shrines, and other sacred spaces have been bulldozed into history. In the camps, Uyghurs are indoctrinated into the supposed evils of religion. Id Kah in Kashgar has remained standing. Its disappearance would cause outrage given its importance. The significance of its existence to the Chinese authorities is to demonstrate to the world observance of Uyghurs' religious freedoms. However, the removal of Islamic motifs from the building tells a different story. It tells us Id Kah is being stripped of religious meaning to become a shell for unsuspecting visitors. There is no reason to remove Islamic motifs from the building other than to demonstrate to Uyghurs that belief in Islam belongs to the past. As such, the despoiling of Id Kah signals a move toward an effective ban on the Islamic faith.

Reported by Bahram Sintash for RFA’s Uyghur Service. Translated and written in English by Elise Anderson.

The Chinese regime can’t bear this, it can’t stand it, and the inner hatred they feel toward Uyghurs has boiled over such that they had the plaque removed.//////You mean Uighurs are fuul of love for the Han people?