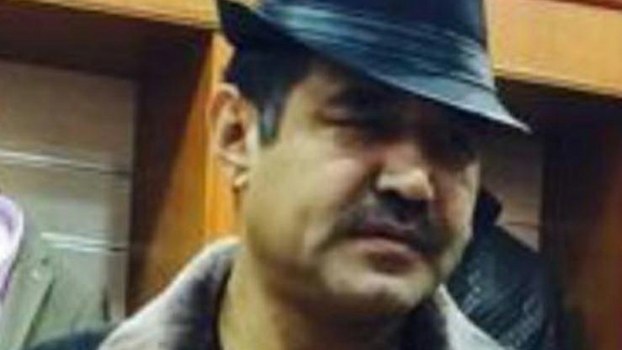 Eli Abdulla in an undated photo.

One of the wealthiest Uyghurs in Hotan (in Chinese, Hetian) prefecture, in northwest China’s Xinjiang Uyghur Autonomous Region (XUAR), has been confirmed jailed for life after his whereabouts were unknown for more than three years, according to sources, who said dozens of his relatives and employees have also been sentenced to prison.

Eli Abdulla, the CEO of Xinjiang Yu Cheng (Jade City) Real Estate Development Ltd.—a company based in the XUAR capital Urumqi that deals in real estate, development, and rentals, as well as the sale of construction materials, chemicals, electronics and mechanical equipment—went missing in mid-2016, and was believed to have been arrested by authorities and sentenced a year later.

His situation could not be confirmed amid an information clampdown in the XUAR, where authorities are believed to have detained some 1.8 million Uyghurs and other Muslim minorities accused of harboring “strong religious views” and “politically incorrect” ideas in a vast network of internment camps since April 2017. Camp incarcerations are largely extra-judicial decisions.

A source who is familiar with Abdulla recently told RFA’s Uyghur Service that the developer had indeed been sentenced to prison and given a life term following an investigation into his assets.

“I was told by officials that the Hotan government offered a piece of real estate for auction,” said the source, who spoke on condition of anonymity for fear of reprisal.

According to the source, Abdulla was “arrested shortly after that” and sentenced in mid-2017.

“I think the Chinese government was worried about a Uyghur man who had so much wealth,” he said, noting that “over the past three years, all wealthy Uyghurs have been targeted for arrest.”

While investigating the information provided by the source, RFA spoke with an official from the Hotan City Intermediate Court, who confirmed that Abdulla had been tried, although he was unable to recall the exact date, saying it had “been a while.”

The official was also unable to recall the judges who pronounced Abdulla’s sentence, but said he knew that the developer had been sentenced to life in jail, before referring further questions to the prefectural Politics and Law Commission.

An official from the Hotan Prefecture Politics and Law Commission, who declined to be named, also confirmed Abdulla’s life sentence.

“Eli Abdulla was one of the wealthiest Uyghurs in Hotan—he had real estate properties in both Urumqi and Hotan,” he told RFA.

“I was told he was sentenced to life in prison. Such cases are usually confidential in nature. I am not fully aware of his case, because it wasn’t related to my area of concern.”

The official said that he had met with Abdulla around 2014 or 2015 at a construction site for work-related reasons, during which the developer mentioned that he had donated either 1 million or 10 million yuan (U.S. $142,725 or $1.4 million) “to a local mosque.”

“I was told he was sentenced because of this donation, but there may be other reasons,” the official said, noting that “he was a philanthropist who gave generously.”

“I know for a fact that more than 50 of his relatives and employees were also sentenced, although I’m not sure if this was business-related.”

The official suggested that Abdulla had been targeted because of what he said was “serious tension” between Uyghur-owned companies and those run by majority Han Chinese from outside the XUAR over the rights to mining jade in the region.

“There were rumors that the Chinese companies had sued him,” he said.

In September, RFA learned that one of the wealthiest Uyghur businessmen in the XUAR’s Kashgar (Kashi) city remained jailed in poor health more than eight months after his conviction on charges of “terrorism” was overturned on appeal, according to court documents.

Also in September, RFA learned that two Uyghurs who run what is widely considered the most successful real estate firm of the past decade in the XUAR had been arrested, with at least one sentenced to a lengthy prison term.

News of the sentencing came amid multiple reports from official media that the central government had ordered local authorities to investigate the finances of all owners of private companies throughout the XUAR, at the same time that internment camps were being built in the region.

According to the directive, the reports said, private business owners were required to fill out declaration forms at the time that provided detailed financial information about their assets and submit them to relevant government departments, where they were subjected to strict review.

In April this year, RFA confirmed that a successful Uyghur property developer named Ilyas Memet had been arrested in March 2018, while a wealthy Uyghur businessman named Yaqup Rozi had died after suffering a heart attack while detained in an internment camp in March this year. Both are believed to have been detained for traveling abroad to countries blacklisted by authorities for travel by Uyghurs due to the perceived threat of religious extremism.

Last month, U.S. Secretary of State Mike Pompeo said a recent leak of official Chinese documents known collectively as the “China Cables,” including the first known “manual” for operating internment camps in the XUAR, is proof that Beijing is committing “very significant” rights violations in the region.