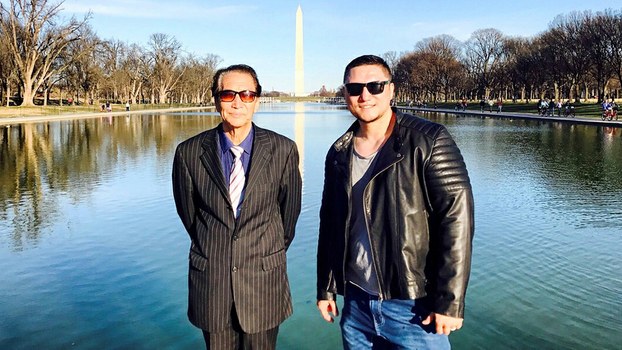 A prominent Uyghur journalist has been confirmed detained in northwest China’s Xinjiang Uyghur Autonomous Region (XUAR) after disappearing nearly three years ago, according to an official in the regional capital Urumqi.

Qurban Mamut, the former editor-in-chief of the official Xinjiang Cultural Journal, went missing around November 2017, several months after he and his wife visited their son Bahram Qurban at his home in the U.S. state of Virginia—the first time the three had seen each other in more than nine years.

Qurban told RFA’s Uyghur Service in October 2018 that he had learned his father was taken to one of a network of internment camps in the XUAR, where Uyghurs and other Muslim minorities accused of harboring “strong religious views” and “politically incorrect” ideas have since April 2017 been detained without legal process.

He said that while his father was guilty of no crime, he was likely detained because “authorities regularly arrest people who have relatives living abroad [to gain leverage over them].”

Qurban’s information was corroborated by one of his father’s neighbors—a Uyghur student who was studying abroad at the time—who said he had learned of the arrest in April 2018 from other residents of the area and that authorities had made “threats” against other family members.

Mamut, of Kuchar (in Chinese, Kuche) county in the XUAR’s Aksu (Akesu) prefecture, earned a bachelor’s degree in literature from Xinjiang University in 1976 and worked as a journalist and editor for the official Xinjiang People’s Radio Station until 1984.

He worked for the Xinjiang Cultural Journal from 1985 until he retired as editor-in-chief in 2011, and was known for selecting works by the region’s most influential writers on Uyghur culture, history, politics, and social development for publication.

Since his disappearance, Qurban’s family members in the XUAR have told him not to ask about his father’s case, suggesting that other relatives could be at risk over his inquiries. Regardless, he has continued to seek information about Mamut’s wellbeing through social media campaigns used by Uyghurs in exile to demand proof-of-life videos of their disappeared loved ones from Chinese authorities.

“Ultimately, I haven’t had a single opportunity to obtain any information about my father [other than that he was interned]—I’ve called so many different places and I’ve used every means I can think of to make calls, to get in touch,” Qurban recently told RFA.

“If only I could have spoken with someone, Uyghur or Han [Chinese], I would have been able to get something out of them. But I couldn’t. I was never able to successfully get in touch with anyone.”

RFA recently spoke with a Han Chinese employee of the Urumqi City Cultural Office who suggested calling the local branch office of the central government’s Bureau of Culture, but a Han staffer who answered the phone there said she had no knowledge of Qurban Mamut.

Another Han employee at the Bureau of Culture told RFA to speak with the Xinjiang Cultural Journal but was unable to provide a contact number.

However, a Han Chinese staffer at the Xinjiang Hall of Public Culture said she knew of Mamut and confirmed that he had been detained.

“He’s not currently here … he’s been retired for a long time,” she said.

“And then his situation later, perhaps you know, he’s currently classified as a ‘detained person.’”

When asked whether Mamut had been sentenced to prison or sent to an internment camp, the staffer said she did not know.

“I don’t know anything else about his situation,” she said. “If you want to know more, you should probably call our boss’s number.”

News of Mamut’s arrest comes amid reports of several Uyghur writers and intellectuals being taken into custody by authorities in the XUAR and either jailed or sent to internment camps as part of what Uyghurs in exile say is a calculated campaign to destroy the cultural identity of their ethnic group.

While Beijing initially denied the existence of the camps, China last year changed tack and began describing the facilities as “boarding schools” that provide vocational training for Uyghurs, discourage radicalization, and help protect the country from terrorism.

But reporting by RFA’s Uyghur Service and other media outlets indicate that those in the camps are detained against their will and subjected to political indoctrination, routinely face rough treatment at the hands of their overseers and endure poor diets and unhygienic conditions in the often-overcrowded facilities.

Among those who have called for Beijing to shut down its camp system and end other rights violations in the region are U.S. Vice President Mike Pence, U.S. Secretary of State Mike Pompeo, Speaker of the U.S. House of Representatives Nancy Pelosi, U.S. Ambassador at Large for International Religious Freedom Sam Brownback, and several high-ranking lawmakers.

The bill has been sent to the desk of U.S. President Donald Trump, who is widely expected to sign it into law in coming days.