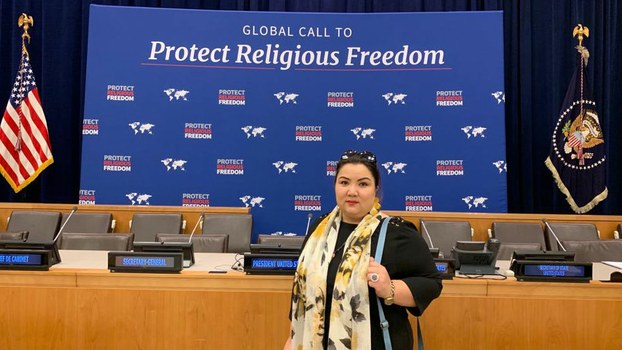 A Uyghur woman whose case was highlighted by U.S. Secretary of State Mike Pompeo has expressed concern over her brother’s safety after he published a video rejecting claims that she was detained in an internment camp in the Xinjiang Uyghur Autonomous Region (XUAR) and forcibly sterilized on her release.

Speaking at a Vatican conference on religious freedom earlier this month, Pompeo singled out China as one of the worst perpetrators of abuse against people of faith, particularly in the XUAR, where authorities are believed to have held up to 1.5 million Uyghurs and other Muslim ethnic minorities accused of harboring “strong religious views” and “politically incorrect” ideas since April 2017.

He emphasized the case of Zumuret Dawut, a Uyghur mother of three who has said that in April last year she was detained for months in a camp, where she was forced to recite Chinese propaganda, beaten for providing food to an ailing fellow prisoner, and injected with unknown drugs.

Dawut, who is married to a Pakistani businessman, said she was released from a camp in Urumqi in June last year, but was fined for having a third child outside of China’s family planning limit and forced to undergo sterilization before authorities would return her passport.

She left China for Pakistan in January and relocated in April with her husband and three children to Washington, where she detailed a similar story to RFA’s Uyghur Service last month.

On Sunday, Dawut’s elder brother, Abdulhelil Dawut, posted a Uyghur language video to “tell the truth to the world” about his sister on Chinese short video platform Kuaishou, according to the official Global Times newspaper, in which he called Pompeo’ speech at the Vatican “an outright lie.”

“My sister [Zumuret] Dawut has never been to any vocational education and training center and has never been forced to get sterilized,” he said, using official terms similar to how China now describes the camps after initially denying their existence. Beijing asserts the facilities provide vocational training for Uyghurs, discourage radicalization, and help protect the country from terrorism.

The Global Times cited Abdulhelil Dawut as saying that his sister had once gone to the hospital to have an operation for a benign tumor on her uterus, although such procedures rarely lead to infertility.

“I think Mr. Pompeo, as the U.S. Secretary of State, should have based his words on facts,” the Times quoted him as saying.

“Stop using my sister [Zumuret] Dawut to make up lies and disturbing our otherwise quiet life.”

The Times also quoted Lu Xiang, who it identified as an expert on U.S. studies at the Chinese Academy of Social Sciences in Beijing, as saying that “using the so-called victim to testify [against China] is actually finding someone to talk nonsense,” calling it a “typical tactic” of Washington, and denouncing Pompeo as a master of “deception” in his role as top ambassador.

In response to her brother’s video, Zumuret Dawut told RFA she believes Chinese authorities “forced him to speak this way” and that she is concerned about his situation.

“He is clearly reading from something—he looks up and down, as if someone is instructing him on what to say, and telling him, ‘You forgot this and that,’” she said.

“It’s also possible that they might have written it all down, with big characters for him to read.”

China in recent years has been caught out repeatedly using state media to broadcast forced confessions by its critics, including human rights lawyers, bloggers and publishers of sensitive political books in Hong Kong.

Zumuret Dawut noted that her brother doesn’t know how to use social media apps to create and share videos, and that he “wouldn’t dare try to distribute something of this magnitude.”

Additionally, she said, the camera work appeared professionally done, as if mounted on a tripod, which suggested that the video had been staged by authorities.

She added that she has never undergone an operation on her uterus, and said she is willing to allow doctors in the U.S. to examine her to dispute the claim.

“In order to expose China’s lies, I am willing to become a test subject,” she said.

Zumuret Dawut described her brother as “a very shy person,” and said that she “felt pain for him after seeing him this way.”

She noted that, due to severe restrictions on the flow of information in and out of the XUAR, it is highly unlikely that he would have known what Pompeo said about China’s treatment of the Uyghurs during the secretary’s speech at the Vatican.

“How in the world would he know if Mr. Pompeo said anything about Uyghurs in a place in China where all forms of communication are blocked except for [messaging app] WeChat,” she wondered.

“I do not hate him, I feel for him. But at least the Chinese authorities informed him about what I am doing.”

The Global Times report came as RFA learned that the missing principal of a middle school in Korla (in Chinese, Kuerle) city, in the XUAR’s Bayin’gholin Mongol (Bayinguoleng Menggu) Autonomous Prefecture, was sent to an internment camp as long as more than a year ago, with former students suggesting he was a victim of a targeted campaign by authorities against Uyghur intellectuals.

Sherep Heyit, the nearly 50-year-old principal of Korla’s No. 6 Middle School, who was previously a Uyghur literature teacher and the head of the Korla City Education Bureau, was detained by police “seven to eight months ago,” a former student told RFA last month.

“I heard that the school organized a condemnation meeting, during which he was he was arrested and taken away,” said the student, who wrote to RFA on condition of anonymity.

Emurula Dawut, one of Heyit’s former students who is now living in Japan, told RFA that he believes the middle school principal was targeted as part of “ethnic cleansing policies” authorities have been carrying out against Uyghurs in the XUAR since 2017.

“Teacher Sherep is a man with very high morals—he was calm and collected, and had strong ethnic pride,” he said.

“The Chinese authorities … aimed to eradicate intellectuals in the same category as him, and I believe he became a target because of that reason.”

Rustem Tursun, another former student who is now living in Australia, also mentioned Heyit’s ethnic identity as a possible reason for his detention.

“He frequently invited famous [Uyghur] writers and poets like Yalkun Rozi [a scholar and textbook author who was detained in October 2016] and Abdulqadir Jalaleddin [a professor and poet who was detained in January 2018] to give talks in Korla, and I think those activities formed the basis for his arrest.”

Held for over a year

Three staff members at the No. 6 Middle School in Korla told RFA that the school “doesn’t have a Uyghur principal,” although at least one said that he was unsure of when Heyit had stopped working there or where he is.

A staffer who answered the phone at the Korla City Education Bureau said he was unaware of what had happened to Heyit, although an employee at the Bayin’gholin Mongol Autonomous Prefecture Public Relations Office said they “don’t have the authority to reveal anything regarding that,” and referred further questions to the Discipline and Inspection Commission, who they said handled Heyit’s case.

But a police officer in Korla, who declined to be named, confirmed that Heyit is being held at a camp in Korla’s Kaifa—or New Development—district, and was initially detained “over one year now.”

While the officer said he did not know the reason for Heyit’s arrest, he acknowledged that “an official from our district told me about it,” when asked whether he was aware of reports that the principal was targeted for setting up events in the city involving Uyghur writers and poets who were later detained.

In September, at an event on the sidelines of the United Nations General Assembly in New York, where Dawut gave an account of her detention, U.S. Deputy Secretary of State John J. Sullivan said that the U.N. had failed to hold China to account over its policies in the XUAR and should demand unfettered access to the region to investigate reports of the mass incarceration and other rights abuses against Uyghurs.

Sherep Heyit, the nearly 50-year-old principal of Korla’s No. 6 Middle School, who was previously a Uyghur literature teacher and the head of the Korla City Education Bureau, ----

Mr.Heyt was arrested because of his son is in a high school student in Nevada. In 2017 , his son returned to Korla during the summer break. After the summer break, his son wanted to return to US to finish his study, however, the authority stopped him from returning, then as an exchange, Mr.Heyt wrote a guarantee letter, and guaranteed that his son will return to China after a year of study, that was the 2018. In 2018, his son didn't return because of fear of arrest. As a result, the authority arrested Mr.Heyt. Mr.Heyt is a very nice , kind and intellectual guy. He has nothing to do with anything of all terrorism and extremism. Today, the above is one of the examples of many thousands and millions.