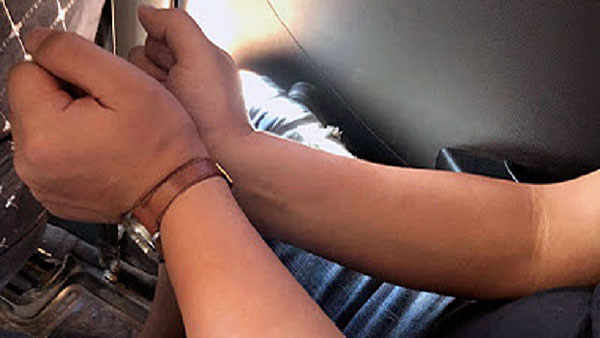 The hands of a Muslim, who was released by Chinese authorities, are shown on June 26, 2018.
Photo courtesy of China Aid Association

Chinese authorities in the northwestern region of Xinjiang are detaining Muslim ethnic minorities en masse and subjecting them to torture and brainwashing to honor the ruling Chinese Communist Party and renounce the tenets of their faith, rights groups warned on Wednesday.

"The authorities force the detainees to accept this so-called education, which is political indoctrination," Human Rights Watch (HRW) China researcher Maya Wang told RFA on Wednesday. "Before they eat, they have to wish [President] Xi Jinping good health, or thank the government and thank the party, before they are allowed to eat anything."

"They are forced to study Chinese characters, and anyone who challenges this arbitrary detention is punished, some physically, some by being locked up in isolation with no food or water," she said.

Dilxat Raxit, spokesman for the World Uyghur Congress, which represents the ethnic minority Uyghur group overseas, said many detainees are closely monitored using the latest facial recognition technology, which is believed to predict a person's actions through the analysis of micro-expressions.

"They use surveillance video of micro-expressions to analyze what people are thinking or feeling," Raxit said. "By looking at changes in these expressions each day ... they can tell whether the person is likely to engage in acts of collective or individual protest."

He said the consequences for not engaging with this process can be dire.

"People have been tortured to death, while others have been beaten to death, or prevented from sleeping, or refused food or water," Raxit said. "Either that or they do whatever would be most humiliating to that person's psychological profile. Sometimes they humiliate them physically, and have been known to employ electric batons."

Adrian Zenz, a lecturer in social research methods at the Germany-based European School of Culture and Theology, says, "The state basically sees southern Xinjiang as a big problem area and a concentration of difficult-to-control populations."

"They want people in regular wage jobs and also in different places in Xinjiang where they are under much more control and in very nonreligious settings," he told the rights group RDSL Monitor in an interview this week. "They want people to secularize and to modernize."

Murat, another Muslim from Xinjiang, told RFA that he was similarly incarcerated, beaten and tortured in a "re-education center."

“Political education centers are generally like prisons," Murat told RFA. "Electric shocks, beatings, and humiliation all take place in there. It's very cruel."

He said inmates are under constant video surveillance.

"Nobody talks; there is a camera on the ceiling and even in the toilet," he said.

Beginning in April 2017, Uyghurs accused of harboring “strong religious views” and “politically incorrect” views have been jailed or detained in re-education camps throughout the Xinjiang Uyghur Autonomous Region (XUAR), where members of the ethnic group have long complained of pervasive discrimination, religious repression, and cultural suppression under Chinese rule.

Earlier this month, an official in Xinjiang's Qaraqash (in Chinese, Moyu) county, said that nearly half of the population of his village is currently detained in re-education camps.

China's central government authorities have not publicly acknowledged the existence of re-education camps in the XUAR, and the number of inmates kept in each facility remains a closely guarded secret, but local officials in many parts of the region have in RFA telephone interviews forthrightly described sending significant numbers of Uyghurs to the camps and even described overcrowding in some facilities.

Citing credible reports, lawmakers Marco Rubio and Chris Smith, who head the bipartisan Congressional-Executive Commission on China, said recently that as many as 500,000 to a million people are or have been detained in the reeducation camps, calling it ”the largest mass incarceration of a minority population in the world today.”

Zenz estimates that the number “could be closer to 1.1 million, which equates to 10-11 percent of the adult Muslim population of the region."

Reported by Wong Lok-to for RFA's Cantonese Service, and by Qiao Long for the Mandarin Service. Translated and edited by Luisetta Mudie.

Usually the other way round! ISIS is an Islamic force to be annhilated by any means. If these people are innocent of belonging to extememe muslim doctrine then it is shameful if China!

In the US, we also brainwash, but we have figured out how to do it so that it does not require physical torture. In fact, it often comes from sources considered to be pleasant, such as watching the TV.

The CCP is waging a war against the Uighur people. They have sent to concentration camps thousands of Uighurs who refuse to follow the Party line. The CCP demands Uighurs pay more loyalty & obedience to the Party than to God. Chinese colonialism in Xinjiang will be recorded in history as one of the great evils of CCP rule.

Brainwashing is necessary since otherwise no one would believe in communist party anymore.

So what is wrong with the hands of the Muslim? I don't see any injuries?