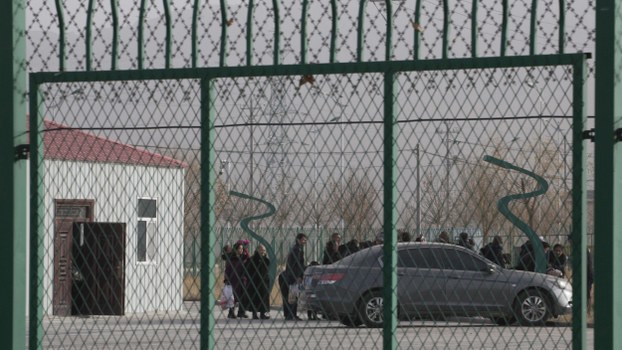 A report last week by the Australian Strategic Policy Institute (ASPI) said that tens of thousands of Uyghur and other Muslim detainees in northwest China’s Xinjiang Uyghur Autonomous Region (XUAR) have been transferred to factories throughout China, where they are forced to produce goods for at least 83 global retailers, including Apple, BMW, The Gap, Nike, Samsung, Sony, and Volkswagen.

Scott Nova, executive director of Washington-based labor watchdog Worker Rights Consortium (WRC), recently spoke with RFA’s Uyghur Service about how forced labor products from the region are finding their way into the global supply chain and how retailers can use their leverage to hold factories to account.

RFA: Can you comment on the findings in the report by the ASPI?

Nova: The situation in general, with respect to forced labor in the Xinjiang Uyghur Autonomous Region and related to it, is extremely grave. It’s been very clear for going on two years that the Chinese government is using forced labor within the XUAR as a means of social control, which has created numerous documented individual cases of forced labor and a presumption that you may find forced labor essentially in any workplace in the region. This newest report from the Australian Strategic Policy Institute documents a different, but related, phenomenon of workers essentially being exported by the Chinese government from the XUAR to factories in Central and Eastern China where, according to that report, they were working under conditions that strongly indicate forced labor. And while our organization can’t independently confirm their analysis, the report is credible and its conclusions are disturbing.

RFA: We contacted some of the companies, but they tell a different story—essentially that there isn’t any reason for concern.

Nova: A responsible company will recognize that if Uyghur or members of other minority groups from the XUAR have been sent by the government to work in factories outside the XUAR that that labor is not voluntary. A responsible company will understand that that labor cannot be voluntary. So the only question a company needs to answer is whether or not such workers are present at the factory. If they are, there’s a problem. So if a company is claiming that there are no workers from the XUAR at the facility, and that can be documented, then that would be meaningful. If there are workers from the XUAR at a factory, and they’ve been sent there by the Chinese government, then if a company is saying that that’s OK because they have concluded that the labor is voluntary, that’s absurd, because there is no way to conduct a meaningful investigation of that question because there is no way that those workers could speak freely without fear of retaliation.

RFA: Does China’s action of creating “alternative working rights” go against existing international workers’ rights? Should everyone be alarmed?

Nova: The violations that are taking place in the XUAR and against workers from the XUAR who are being sent elsewhere in China are rank violations of international labor standards, as well as Chinese law. And there’s no question that these are legal violations—they’re also obviously moral violations that constitute severe human rights abuses and the international community should be doing everything it can to discourage the Chinese government from continuing down this path.

RFA: How can governments deal with this issue? And does the U.S. have any legal tools to fight against forced labor?

Nova: The U.S. does—it’s against U.S. law to import goods made with forced labor at any level of the supply chain, including raw material. In the case of garments, where one-fifth of the world’s cotton supply for the fabrication of cotton garments comes from Xinjiang, it is virtually certain that goods with forced labor content are flowing into the United States as we speak. The U.S. has started to take enforcement actions and it should do so more energetically and more aggressively.

RFA: Have you carried out any investigations on this issue and have any new findings?

Nova: We did. We linked Lacoste, the French brand, to a factory in the XUAR in Ili Kazakh (in Chinese, Yili Hasake) Autonomous Prefecture … using forced labor. That was reported just earlier this week. We documented forced labor at the Hetian Taida [Apparel Co. Ltd.] factories in Hotan (Hetian) [city], which had partly led the U.S. government to ban imports from Hetian Taida, and we are conducting additional investigations in the XUAR. The factory in question, which is called Yili Zhuo Wan Garment Manufacturing, which makes gloves, was exposed as using forced labor in the internment camps system as early as March of last year. But Lacoste, nonetheless, placed orders there in September of last year, relying on a so-called “factory audit” from a firm called Bureau Veritas, which currently concluded that there was no forced labor, even though the evidence demonstrates that there is.

And of course brands have responsibilities here, as do auditing firms. Brands have real leverage here because the garment industry is so important to the economy in Xinjiang. And a real question brands and retailers are going to have to answer, auditing firms involved with the industry are going to have to answer, is are they going to act responsibly amidst this human rights crisis.