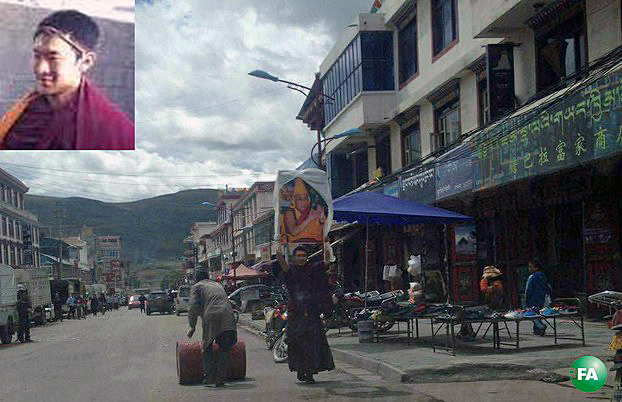 Chinese police in Sichuan province’s Ngaba county detained a young Tibetan monk on Wednesday after he called out in public for Tibetan freedom in the third such protest in the area in the last three weeks, sources said.

Jampal Gyatso, a 21-year-old monk from Kirti monastery, walked through the main street in Ngaba (in Chinese, Aba) town by himself around noon while holding a photo of the Dalai Lama, Tibet’s exiled spiritual leader, above his head in protest against Chinese rule in the region, said Kanyak Tsering, a monk at the Dharamsala, India-based exile branch of Tibet’s Kirti monastery.

Soon after Gyatso started calling for freedom for Tibet, local police detained him and took him away, Tsering and other Tibetan sources told RFA’s Tibetan Service.

Since then, no information about his detention has been released, Tsering said.

“At that time, several Tibetans who witnessed the scene shouted in support of the protestor,” a Tibetan source from Tibet said.

Gyatso called for freedom for Tibet and a long life for the Dalai Lama, another Tibetan source from Tibet said.

“He shouted against Chinese policy in Tibetan areas [while] walking through the streets,” he said.

After Gyatso’s detention, Chinese police searched his room in the monastery, he added.

Gyatso and his family — father Suya, mother Tare Kyi, a brother and a sister — are from Meruma village group number 3, Tsering said.

On Tuesday, Chinese police in Ngaba county detained Lobsang Kelsang, another young monk who launched a solo protest on a central street in Ngaba town, calling for freedom for Tibet.

Kelsang’s solo protest followed a similar protest by a young Tibetan woman, Dorje Dolma, who called out for Tibetan freedom on a street in Ngaba on Aug. 20.

Sporadic demonstrations challenging Chinese rule have continued in Tibetan-populated areas of China since widespread protests swept the region in 2008, with 143 Tibetans to date setting themselves on fire to oppose Beijing’s rule and call for the Dalai Lama’s return.