Tibetan Self-Immolator’s Family Are Held by Police For Questioning 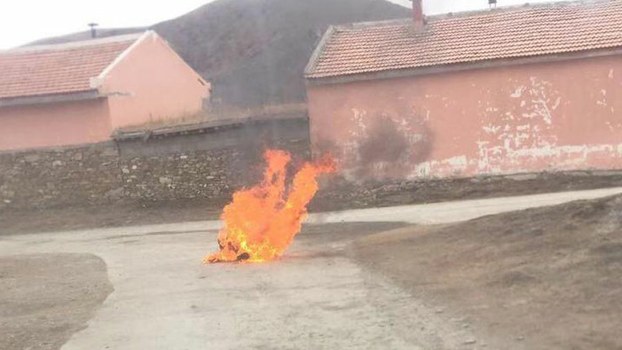 Yonten burns to death in Ngaba's Meruma township in a protest against Chinese rule, Nov. 26, 2019.
RFA

Police in western China’s Sichuan province detained the family members of a young Tibetan who died in a self-immolation protest against Chinese rule last month and held them for questioning, a source close to the family says.

How long the protester’s relatives were detained is not yet clear, and they may have already been released, the source, a former neighbor now living in India, told RFA’s Tibetan Service on Thursday.

The 24-year-old protester named Yonten set himself on fire in Ngaba (in Chinese, Aba) county’s Meruma township on Nov. 26 following a nearby religious gathering and died at the scene, the source said, speaking on condition of anonymity.

“On the day of his protest, his family members were summoned to the local police station for interrogation, but it’s not clear how long they were held and questioned,” he said, adding that relatives were able to take possession of Yonten’s remains from police the next day.

“On Nov. 30, a funeral and memorial service was held to mourn for the deceased,” he said.

Yonten’s protest follows the December 2018 self-immolation of Drugkho, also in Ngaba, and brings to 156 the number of self-immolations by Tibetans since the wave of fiery protests against Chinese rule of their homeland began in 2009.

Because of strict Chinese controls over phone and online communications in the area, detailed information is now hard to obtain, and it is not known whether Yonten left a written statement explaining his actions before launching his protest, the source said.

Ngaba’s main town and nearby Kirti monastery, in which sources say Yonten was once enrolled, have been the scene of repeated self-immolations and other protests in recent years by monks, former monks, and other Tibetans calling for Tibetan freedom and the return of exiled Tibetan spiritual leader the Dalai Lama.

In a Nov. 29 statement, Tibet’s India-based exile parliament called on China to take note of Yonten’s protest, the first self-immolation by a Tibetan in almost a year, and to end what the parliament described as Beijing’s repressive policies in Tibetan areas.

Speaking to RFA in an interview, Carole McGranahan, a Tibet scholar at the University of Colorado in Boulder, called self-immolation protests by Tibetans “a direct response to Chinese oppression in Tibet.”

“As the Dalai Lama is still in exile, a number of Tibetans inside and outside Tibet have decided that drastic measures are needed, not just to express their political views against ongoing Chinese oppression, but also to try and do something that they think might be a benefit to other Tibetans in terms of trying to alleviate the suffering the community was going through.”

Addressing a conference of top Tibetan religious leaders held last week in Dharamsala, India, the Dalai Lama noted what he called the courage of the 156 Tibetans who have now burned themselves to death “in an effort to remind the world [of the Tibetan people’s plight].”

“They chose to sacrifice by burning themselves and not harming anyone else,” the Dalai Lama said.  “This is truly amazing.”

In reports sent from inside Tibetan areas ruled by Beijing, Tibetans say Chinese authorities regularly restrict their political activities and peaceful expression of ethnic and religious identity and subject them to persecution, torture, imprisonment, and extrajudicial killings.