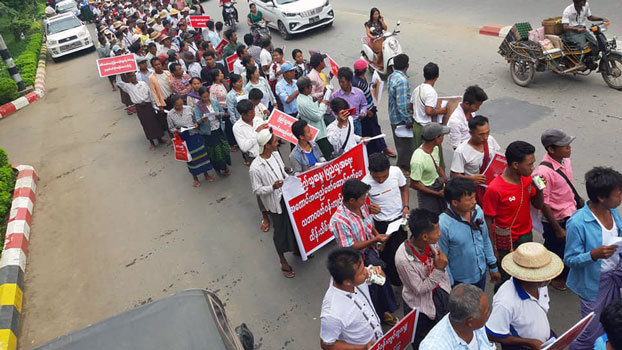 Myanmar citizens protest against the regional government after it did not object to a Chinese-backed company's request to conduct a ground inspection for a new copper mine project, in Monywa, northwestern Myanmar's Sagaing region, Sept. 30, 2019.
RFA

The Sagaing regional government in northwestern Myanmar on Monday cancelled permission for a Chinese company to conduct inspections for a new copper mine project following a protest by local residents in the capital Monywa.

Hundreds of local residents staged a morning protest opposing the granting of permission to Myanmar Yang Tse Copper Ltd. to do ground studies for a proposed project in the Wazeintaung area of Yinmabin township.

Chinese-operated copper mine projects in the resource-rich region have generated controversy among locals, especially in the town of Letpadaung where China’s Wanbao Copper Mining Ltd. and the Myanmar military-owned conglomerate, Union of Myanmar Economic Holdings Ltd. (UMEHL), operate a large mine.

Letpadaung residents and farmers have accused the Chinese operators of appropriating their land without providing adequate compensation and damaging the environment.

The Sagaing government had informed the Ministry of Natural Resources and Environmental Conservation in Myanmar's capital Naypyidaw that it had no objections to the company’s request to conduct a ground inspection for the new mining project.

Soe Oo, Sagaing’s minister for planning and finance, told RFA’s Myanmar Service that officials held an emergency meeting on the issue amid the protest.

“We can only make comments [recommendations], and the Union government has to make the decisions,” he said. “Now we have reported to the Union-level minister that we have withdrawn our [previous] comment that we had no objections in accordance with the people’s wishes. We issued our position immediately after calling for an emergency meeting.”

Protesters highlighted five points during the protest, one of which was that the company had already conducted feasible studies for the project and that the regional government had issued recommendations without the public’s consent.

“It’s very likely the project will begin once the studies are concluded,” he said.

He said the protesters are concerned that if the new project is built, they would not receive adequate compensation for the land they would have to give up.

“There were a lot of problems at the Letpadaung [copper mine] and at betel farms,” he said. “Compensation for the land was less than the current value there, so the protesters are worried.”

Protester Myint Aung, who is a member of the Letpadaung Protection Committee, said residents have already bore the brunt of forfeiting land without adequate payment and dealing with the negative environmental consequences of two other mines in the region.

“People have already suffered a lot from the Kyaezintaung and Sabaetaung [mining projects],” he said. “It will be much worse if this Wazeintaung [project] is allowed.”

“We’re not saying don’t extract minerals, but we need to protect the environment and local populations,” he said.

Wazeintaung is adjacent to the Kyaezintaung and Sabaetaung mine projects where Myanmar Yang Tse Copper Ltd., a subsidiary of Wanbao Mining Copper Ltd., is currently working.

The Chinese concern has proposed that the new mining operation be built on nearly 113,000 acres of land in Yinmabin, Salingyi, and Kani townships in an area that is more than 100 times larger than that of the Letpadaung project, locals said.

Sagaing’s minister for resources and the environment earlier reported to the central government that regional officials had no objection to the project if it covered only 28,000 acres.

“The [local government] had replied to the Union government which sought our opinion that it had ‘no objections’ if the project was carried out in inhabitated areas,” said Lar Htaung Htan, Sagaing’s minister of Chin ethnic affairs.

“Testing in vacant lands would not harm the environment, and it could create job opportunities for the locals,” he said, explaining the Sagaing’s government’s rationale.

Residents objected to the project during a July 3 public meeting with the local government officials and lawmakers.

“All of them objected to the project, but the objection was clearly ignored,” he said.

Two percent of the Sagaing government’s share would be set aside to finance local development, he added.

Legislators said that parliamentarians representing the three townships that would be affected by the proposed project would report their positions on the issue to top officials, including State Counselor Aung San Suu Kyi.

Representatives for the Myanmar Yang Tse Copper Ltd., were not unavailable for comment.

A Sept. 18 post on a social media account associated with the company said that the concern and the UMEHL were providing residents with free health care services and photos in an apparent attempt to win them over.

The Myanmar Yang Tse Copper Ltd. company planned to invest U.S. $6 million-U.S. $10 million in the ground inspection which was expected to take about five years to complete, the online journal The Irrawaddy reported.

The inspection would have affected more than 80,000 residents in over 120 villages, the report said.