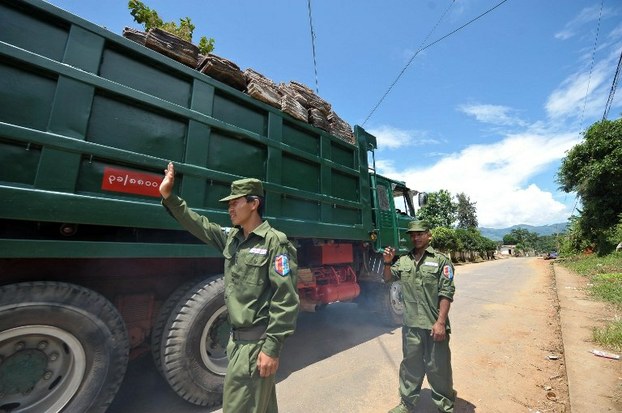 United Wa State Army soldiers stop a truck at a checkpoint in the Wa region of Shan state in a file photo.

Leaders from Myanmar’s United Wa State Army (UWSA) and Mongla Army will meet with State Counselor Aung San Suu Kyi and military chief General Min Aung Hlaing in the country’s administrative capital on Friday to try to build trust among the parties prior to the government’s major peace conference.

“Only top-level leaders from the UWSA and Mongla groups will meet with Aung San Suu Kyi and the military chief,” said Zaw Htay, spokesman of the President’s Office, adding that his office would provide further details on the first day of the meeting.

The two-day meeting is an important step for Aung San Suu Kyi’s 21st-Century Panglong Peace Conference scheduled for late August and a way to build trust among the parties, he said.

“They will discuss the inclusion of appropriate representatives in the 21st-Century Panglong Peace Conference, so they can hold it successfully and work together for peace,” he said.

The USWA and Mongla Army have already decided to participate in the peace conference.

In the original Panglong Conference in 1947, her father, General Aung San, promised equal rights and self-determination to ethnic minority groups. It failed after his assassination later that year.

The first group of USWA representatives, led by senior leader Pao Yu Yi, arrived in Naypyidaw on Wednesday and was welcomed by Thein Zaw, vice chairman of the government’s peace commission, and Khin Zaw Oo, a former army lieutenant general who is the organization’s secretary.

The group of Mongla Army leaders led by Sai Lin, from what was known as the Mongla special region No. 4 of Shan state prior to 2008 when the country’s current constitution came into effect, arrived in the capital on Thursday.

The Wa and Mongla ethnic minorities live in a mountainous region of eastern Myanmar's Shan state on the border with China and have strong cultural links with the country.

Their armed groups made up most of the China-backed Communist Party of Burma, before it collapsed in 1989 and splintered into various ethnic armies that signed cease-fire agreements with Myanmar’s former junta, which granted them a degree of autonomy.

The UWSA was among the armed ethnic groups that refused to sign a nationwide cease-fire agreement (NCA) brokered by the administration of former president Thein Sein last October, arguing that the pact should be all-inclusive.

In June, Tin Myo Win, the new peace envoy for the National League for Democracy (NLD) government, met with leaders from the UWSA to get them to agree to a sit-down meeting in the run-up to the peace conference.

Leaders of the USWA—Myanmar’s largest ethnic army with an estimated 25,000-30,000 troops—did not make it to the summit that 17 armed ethnic organizations are holding this week in the town of Mai Ja Yang in northern Myanmar’s Kachin state to hammer out the formation of a federal democratic union.

Summit participants are also discussing security and defense issues and a framework for political dialogue.

The UWSA arranged its own meeting with government officials before it received the summit invitation and may have had difficulties choosing a delegation of leaders to attend the summit, the online journal The Irrawaddy reported, citing Khu Oo Reh, chairman of the summit organizing committee.

Aung San Suu Kyi said on Tuesday that she expects reconciliation and unity to be the outcome of the armed ethnic group summit, which ends Friday.

She also told reporters at press conference in neighboring Laos, where she was attending an Association of Southeast Asian Nations (ASEAN) meeting, that the organization’s member countries will become stronger if they are united, and that Myanmar will get stronger as well if there is unity in the country.

But not all armed ethnic groups appear ready for reconciliation and unity.

The Ta’ang National Liberation Army (TNLA) did not sign the NCA with the previous government and is not participating in this week’s summit.

Its troops have clashed periodically with the Myanmar army in northern Shan state during the past year, as well as with another ethnic army, the Shan State Army-South.

Mogok locals have donated food to the refugees, he said.

“People are afraid to stay in the village, and most of them have moved out to Mogok,” said village official Lwin Ye. “Only a few people who are not able to move are staying here.”

Although ethnic Palaung, Lisu, Gurkha, Shan, and Myanmar people live in the village, the soldiers only took the Palaung people, they said.

“We can’t confirm it yet and are still verifying it,” said TNLA spokesman Colonel Tar Aik Kyaw. “The TNLA has never recruited in this township before, and we usually recruit in Namhsan, Manton, Namkan, and Kutkai townships.”