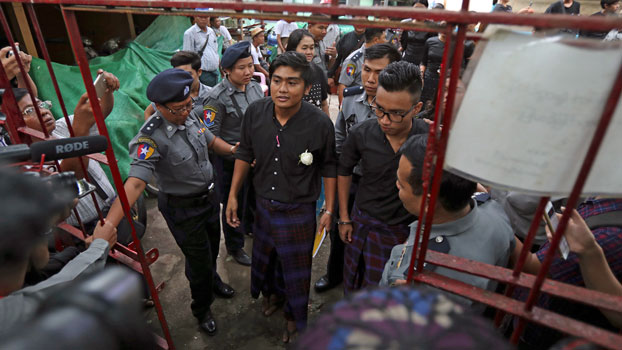 Five members of a traditional satirical group were sentenced Wednesday in Myanmar to one year in prison with labor for mocking the national military in a performance earlier this year during the country’s annual New Year’s celebration, a lawyer for the performers and activists who support them said.

The members also livestreamed their thangyat, a satirical work akin to modern slam poetry that usually includes humorous criticism of politics, society, and the military.

The five were convicted under Section 505(a) of Myanmar’s Penal Code for the circulation of statements, rumors, or reports with the intent to cause any military officer to disregard or fail in his duties. The crime carries a maximum sentence of two years in prison, a fine, or both.

Despite the convictions, the defendants’ attorney San San Myint said she was confident that her clients would be exonerated.

“This sentence will cause many losses for them,” she said. “We are going to appeal this charge to the parliament or to other authorities as well as appeal other charges pending against them.”

Though their supporters urged the student performers to plead not guilty instead of requesting a pardon, the defendants said that they will not appeal their sentences.

The lyrics of Peacock Generation’s satirical performance on April 10 in Mayangone township included demands to oust the 25 percent of military officers who are appointed as lawmakers in parliament, to prosecute the military at the International Criminal Court for atrocities it is accused of committing, and for the military to get out of politics.

Lieutenant General Than Tun Myint from the Yangon Region Military Command filed the defamation lawsuit against the group, claiming their lyrics harmed the reputation of the armed forces.

He told the media after Wednesday’s court hearing that he filed the lawsuit to seek justice.

“When you talk about rights, you can’t focus only on an individual person’s rights,” he said. “In addition to the rights of the accused, you need to have sympathy for the plaintiff’s rights and the military soldier’s rights.”

“As you know, we, the military, are sacrificing our lives to fight for the country,” he said. “One should not be attacking and assaulting the men fighting for their country. They are at the service of the country. They can’t just say whatever they want just because they have rights. That’s why we wanted justice and filed the lawsuit. We will abide by the court’s sentence.”

Zayar Lwin from the troupe said the performance was not intended to mock the military but to advocate constitutional amendments that would eliminate the armed forces from politics.

“In fact, we didn’t intend to insult the military,” he said. “We want to change the constitution. We want the military to stay out of politics, so we used these lyrics to encourage it to be a professional armed force.”

‘Their words are meaningless’

There was a heavy security presence at the courthouse session attended by foreign embassy officials.

“These students were calling for conditions of peace in the country with their satirical performance,” said democracy activist Nilar Thein from the 88 Generation Peace and Open Society, a group of former student activists who protested military rule in Myanmar 30 years ago.

“Their words about creating peace are meaningless today,” he said.

Activist Min Thwe Thit from the All Burma Federation of Student Unions, an umbrella group for all student unions in Myanmar and a supporter of academic freedom and student rights, said his organization would send an appeal on behalf of the convicted performers to the government in two weeks.

“We are going to send the letter of appeal to the government after the Botahtaung Township Court declares a verdict,” he said, referring to another township in Yangon where the performers face charges.

“They call themselves a democratic government, but they are now prosecuting and sentencing those who practice democratic principles,” he said. “It is not acceptable. We have nothing to say to the military. We will not appeal or object to them since they are always in noncompliance.”

London-based Amnesty International, which has been monitoring the case, issued a statement about the sentencings.

“This is an appalling verdict,” said Joanne Mariner, Amnesty’s research director for South East Asia. “Punishing people for performing a piece of satire speaks volumes about the dire state of freedom of expression in Myanmar.”

“These activists are prisoners of conscience,” she said. “They have already spent six months behind bars, just because the Myanmar authorities are too thin-skinned to tolerate the mildest criticism.”

Mariner also called on authorities to quash the convictions, drop further charges against the Peacock Generation troupe, and immediately release its members.

The Peacock Generation performers face similar charges in courts in other places where they performed, including Yangon’s Botahtaung township, and in Pathein and Pyapon townships in Ayeyarwady region.