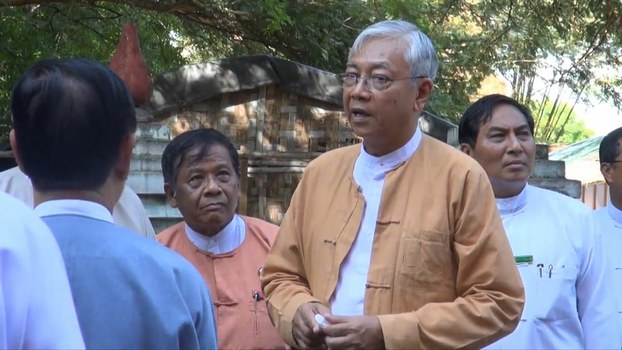 Myanmar’s President Htin Kyaw visited the ancient city of Bagan on Thursday to survey earthquake damage to the centuries-old Buddhist pagodas that are one of the Southeast Asian country’s main tourist draws, urging local officials to carry out repair work systematically.

About 200 of the town’s pagodas in its famous archaeological zone suffered damage when a 6.8-magnitude earthquake struck on Wednesday near the town of Chauk, about 30 kilometers (19 miles) south of Bagan in central Myanmar’s Magway region.

Though police and soldiers cordoned off the affected areas of the zone, Htin Kyaw said officials should quickly reopen places with undamaged pagodas for religious pilgrims and tourists to continue visiting.

“When we have to repair and preserve damaged pagodas, it should be done in a systematic way by taking time,” Htin Kyaw said during a meeting with officials at the Bagan Archaeological Museum, adding that the restoration work should be done in a manner that preserves the structures’ ancient heritage.

Zaw Myint Maung told him that the damaged pagodas would be repaired by local restorers and administrators working in collaboration with experts from the United Nations' cultural agency UNESCO.

The last major earthquake to hit Bagan was a 6.5-magnitude temblor that occurred on July 8, 1975, killing two people and injuring 15 others. It severely damaged more than half of the area’s pagodas and temples and toppled the notable Buphaya Pagoda, which broke apart and fell into the Irrawaddy River.

Restoration work was carried out on many of the damaged pagodas in the 1990s when a military junta ruled Myanmar, but was criticized by art historians and preservationists worldwide for its use of modern materials and scant adherence to original architectural styles.

Today roughly 2,200 temples and pagodas remain, many of which were built between the 10th and 13th centuries.

‘Time to change the system’

Sun Oo, an architect and member of the Bagan Management Plan Organizing Committee who has been conducting a survey of the town’s architectural heritage, told the Myanmar Times in June that more than 600 of Bagan’s pagodas have been ruined by faulty renovation work, resulting in artificial replicas.

“It’s time to change the system of putting conservation work out to tender,” he was quoted as saying.

The Bagan branch of the Ministry of Culture's Archaeology and National Museum Department oversees the maintenance of the religious structures for which tenders are awarded for restoration work.

“The masons hired by the tender-winning companies do not have the required skills,” Sun Oo was quoted as saying. “There are not enough masons qualified to do preservation work on valuable ancient architecture.”

The Bagan archaeological zone is a main attraction for the country’s nascent but growing tourism industry, popular with religious pilgrims and tourists who come and scale the ancient Buddhist monuments to watch the sun set.

In fiscal year 2014-15, roughly 242,000 tourists who visited the zone generated about U.S. $4.1 million, according to a May 2015 article in the Myanmar Times which cited figures from the Bagan branch of the Archaeology and National Museum Department.

In 1996, Myanmar officials put in an initial application for the Bagan archeological site and pagodas to become a UNESCO World Heritage Site, but the bids are said to have been rejected because of poor management strategies and improper restoration work.