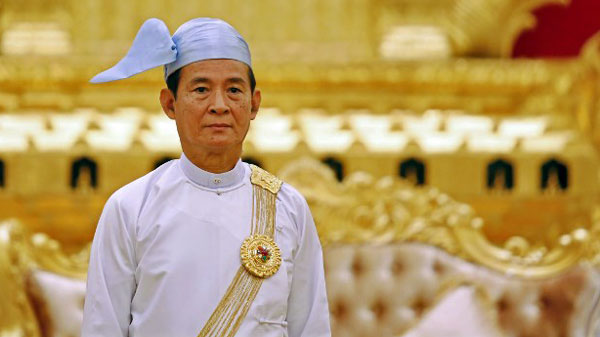 Myanmar's President Win Myint attends an event to accept credentials from foreign ambassadors at the presidential house in Naypyidaw, May 3, 2018.
AFP

Myanmar President Win Myint has barred a group of Shan state ministers and lawmakers from traveling to Indonesia on a food-safety study tour, leaving the officials to speculate why some colleagues were able to make the trip, while others were held back.

The Myanmar School of Politics (MySoP) arranged for three ministers and seven legislators from the Shan state government, and 16 others from 12 political parties, to visit Indonesia from June 3-8.

The school is a joint program set up by the Netherlands Institute for Multiparty Democracy (NIMD) and Political Parties of Finland for Democracy (Demo Finland) to strengthen the democratic role of politicians and political parties at the regional and state levels in Myanmar and enhance multiparty dialogue.

MySoP has been working with politicians and political parties in Myanmar’s five easternmost states and regions, including multiethnic Shan state, since 2014.

But an announcement by Win Myint’s office issued on Monday gave a vague reason for not allowing the Shan ministers and lawmakers to go to Indonesia.

“It said we are not allowed to travel to Indonesia because the trip was not in accordance with certain procedures, but we don’t know how it went against any procedures,” said Yaw Thut, an ethnic Lahu minister who was not permitted to go on the study tour. “The Shan state government and speaker of parliament might have a more detailed announcement, but we don’t know the details.”

Lawmaker Nyi Nat of Matman township in the Wa Special Region of northern Shan state said that he returned to the town of Lashio after he found out he could not participate.

“Sixteen people from 12 political parties had already received permission and went there, but then the President’s Office announced at the last minute that it was barring state ministers and MPs [from Shan state] from leaving for Indonesia,” he said.

The abrupt decision to cancel the travel plans of the Shan group left them to speculate about the reasons behind the move.

“I don’t know why it is exactly, but there might be some reasons we were barred from the trip, such as connecting with people from Indonesia regarding travel and visa applications for the trip,” said Sai Hseng Tip Long, Shan state’s finance minister,

“For example, we need invitations from our counterparts for a foreign visit,” he said. “We can’t go to any foreign country without completing certain procedures that pass through the Foreign Affairs Ministry. We have to submit our documents to the ministry, and we can travel only after we get permission from the Myanmar government.”

“In my opinion, there might be some mistake in their travel procedures,” he said. “That’s why we have been barred.”

RFA was unable to reach the President’s Office for comment.