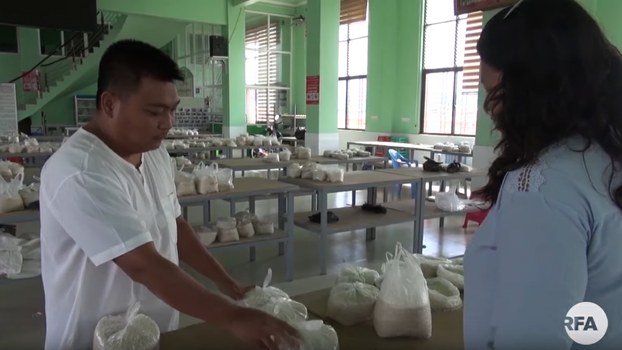 At a rice wholesale center in Muse, Myanmar, Ko Sithu (left) discusses with an RFA reporter how Chinese tariffs have caused severe drops in rice prices, in September 2019.

Prior to Beijing’s closure of the black market routes, the merchants enjoyed fairly barrier-free movement of their goods into China, but now they face taxation as high as 60 percent, especially for high-traffic commodities like rice and other agricultural products.

The effect has been particularly devastating at a rice wholesale center in Muse, a town that borders China in Myanmar’s Shan state. In days past, Chinese merchants used to crowd the facility, looking for rice they could buy cheaply, then sell for a healthy markup at home.

But now the wholesale center is nearly deserted.

Ko Sithu, a rice merchant at the center, to RFA’s Myanmar Service his business is drying up because tariffs made the grain less competitive.

“When [the Chinese] raised taxes, the rice on this side wasn’t getting a good price any longer. It’s no longer [affordable] to bring it here. We are trying to sell off the rice [we have] here at their [lower offered] price, he said.

After rice, the second largest export at the Myanmar-China border is fruit. Under new import policies, some fruits, like pineapple, which had been traded freely for many years across the border, are now subject to restrictions.

This has translated to lost income for pineapple cultivators and sellers. Local merchants say that the lack of a concrete bilateral economic agreement is causing merchants in Myanmar to suffer, and they worry that the fruit’s restricted status gives the Chinese merchants they sell to an upper hand in negotiations.

“The restrictions toward [Myanmar] have increased a lot within the last year. Previously [selling fruit across the border] was easy,” said U Sai Khin Maung, the vice chairperson at a fruit wholesale center in Muse township.

“It seems like the wealthier and more developed [China] gets, the more restrictive their rules become,” he said.

Fruit growers say they dislike devoting resources and labor into cultivation when trade policies and prices are unstable. They would like to sell their fruit legally, but when Chinese pineapple imports were stopped it became a black market item, they say.

The result has been that the Myanmar sellers have more pineapple than the Chinese buyers want, meaning the Chinese have an advantageous negotiating position.

Daw Tin Tin Hla, a pineapple farmer in Shan state, said that the restrictions on the fruit are ruining the livelihoods of cultivators like her.

“This pineapple is not gold or a gem, or teakwood. If they prohibit it and I can’t sell it in three days, it’ll go bad. So we cultivators are in so much trouble this year,” she said, adding, “Some people who have debts cannot pay back what they owe.”

“We were able to sell pineapples [easily] before, but now that pineapple has been suddenly blocked we are thinking hard about where we can sell them. If you don’t pick them in three days, they become yellow,” she explained.

Merchants and local growers like Daw Tin Tin Hla usually send their fruit across the Ruili river into China.

Only when the goods arrive there, do they get payment.

Lately at one crossing into Jiegao, a border town in China’s Yunnan province, there has been very little activity because of Beijing’s new import restrictions.

Daw Tin Tin Hla said she and her family had attempted to cross the river into China to sell the pineapples there.

“We’ve gone from dock to dock [along the river]. When they say a dock is open for business, we go there, selling whatever we can. But later the Chinese will tell us the dock is closed and we can’t go there anymore,” she said.

Uncertainty reigns over the status of the river docks and their access to them, she said.

When RFA asked U Kyaw Soe, the deputy director at the Muse district General Administration Department on the border, he had no concrete answer as to why China is closing the black market routes and restricting imports of pineapples.

“It would be better if these situations are discussed diplomatically at the state level,” he said.

“There are many problems here at the border. We can’t do anything about it because it’s [China’s] rules,” he added.

Those involved in cross-border trade say that they want the two countries to negotiate a fair trade deal so that merchants and growers don’t have to suffer. Despite their disadvantageous position, sellers in Myanmar have no other alternative but to trade with China.

But without a bilateral agreement, instability will be the norm in the industry, the merchants say.

Reported by Khaymani Win and Kan Thar for RFA’s Myanmar Service. Translated by Than Than Win. Written in English by Eugene Whong.