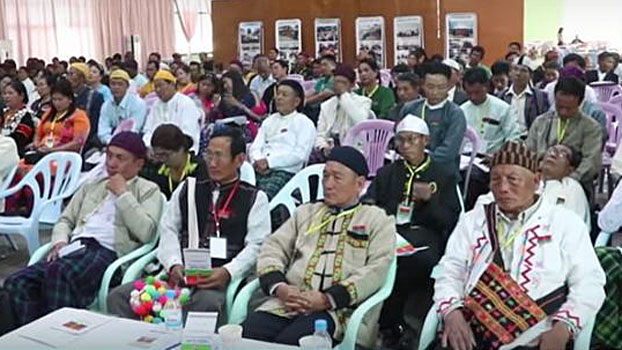 Local political parties in northern Myanmar’s Kachin state have been working together to strengthen the prospects of their candidates beating those from the ruling National League for Democracy (NLD) party in general elections later this year, politicians and activists said Tuesday.

Other ethnic parties are doing the same as they try to drive up support for their candidates running for legislative seats to reverse the results of the last general election five years ago in which NLD party members dominated.

“It is very important for us to win seats in parliament in the 2020 election,” he said. “Only when we have MPs can we officially contribute to the peace process and other development issues.”

The combined KSPP won more votes than the NLD in Kachin state in the 2018 by-elections.

“There is more transparency now,” he told RFA’s Myanmar Service. “The winning parties cannot lie about their performance during their tenure.”

Voters are now savvier than they were before at assessing the effectiveness of individual candidates, and they will not automatically cast ballots for those endorsed by party leaders, he added.

“People can clearly observe their performance and competency — in real time,” Chan Htan Khin said. “The local ethnic parties will get more votes than they did in previous elections and become an emerging force.”

Myanmar political analyst Maung Maung Soe pointed out that some communities in the state, such as the Shanni ethnic groups who live in the area along a railway line between Myitkyina and Moe Kaung, will not automatically vote for ethnic parties.

“It is important that the Kachin parties negotiate with the local Shanni parties,” he said. “We cannot tell if the ruling NLD party or USDP will win in the Shanni areas. So, it is not predictable that Kachin parties would win in Kachin state.”

The Shanni, also known as the Red Shan, live in Kachin state and neighboring Sagaing region, and are a subgroup of Myanmar's largest ethnic minority group, the Shan.

In January 2016, the Shanni founded an insurgent group called the Shanni Nationalities Army, which is active in Kachin state.

Myanmar’s de facto leader Aung San Suu Kyi has been traveling around the country meeting with ethnic communities, including those in Kachin state, in a bid to shore up the NLD’s relations with ethnic groups as the party faces elections.

The meetings follow the formation in September 2019 of a new committee dedicated to engaging and promoting relations with ethnic political parties in the multiethnic country that has seen decades of internal warfare.

Aung San Suu Kyi had made forging peace and creating a democratic federal union the primary goals of her administration after winning elections in 2015.

But her government has grappled with a sputtering peace process marked by ongoing hostilities between national forces and rebel ethnic armies in its far-flung regions, producing hundreds of thousands of displaced villagers.

The rebel Kachin Independence Army (KIA), the state’s main ethnic armed group, has not signed the government’s nationwide cease-fire agreement and continues to engage in fighting with Myanmar forces.