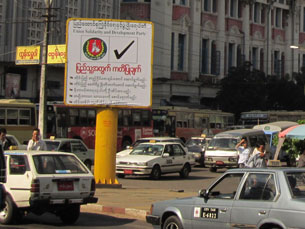 Armed ethnic groups in Burma have agreed to establish a joint army to repulse any offensive by the ruling military junta's forces amid fears of a full-blown civil war after Nov. 7 elections.

Six ethnic groups controlling territory in the country's northern and eastern border regions forged the pact after a three-day meeting at the Thailand-Burma border town of Mae Hong Son on Nov. 2, officials from the groups said.

They set up an ad hoc committee to devise a strategy to repel a government offensive expected after the elections, which have been criticized as a sham by the ethnic groups and supporters of detained democracy icon Aung San Suu Kyi as well as Western powers.

The panel will also look into setting up a "federal union" among the states they control, including areas bordering China, an ally of the junta.

"The committee will focus on forming a federal army," an ethnic group leader said, speaking on condition of anonymity.

"This army will respond to the regime's army offensive after the elections," the leader said.

The move came amid mounting tensions as the junta tries to bring under its control some of the ethnic group armies, which currently act as border guards as part of a ceasefire agreement. 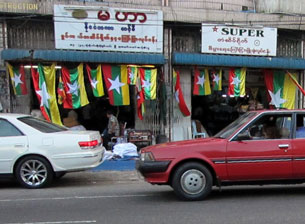 A shop selling the new Burmese flag, in an undated photo. RFA RFA
The groups fear that they could be subsumed by the junta if they come under its control, thwarting their longstanding aim  for greater autonomy.

The groups that have forged a ceasefire with the junta are the Kachin Independence Organization (KIO), New Mon State Party (NMSP), and Shan State Army-North (SSA-N).

Those which are battling the junta are the Karen National Union (KNU), Karenni Progressive Party (KNPP) and
Chin National Front (CNF).

The committee will be led by a KIO general, the officials said.

The ethnic groups have denounced the election as a ploy by the junta to end their struggle for autonomy under a federal system. Polls have been banned in some ethnic areas amid reports that the junta could not guarantee the victory of its proxy parties.

Detained Nobel laureate Aung San Suu Kyi, under house arrest and her party dissolved because it refused to participate in the polls, has supported calls for "real" federal union.

The NLD, led by Suu Kyi, won the country's last election, in 1990, in a landslide, but the generals ignored the result.

Ethnic minorities consist of about 40 percent of Burma's 56 million people. Previous attempts to bring them under a common banner have mostly failed.

The Burmese military has battled ethnic rebels since independence in 1948. Rights groups have accused the military of abuses in their counter-insurgency campaign, including the rape, torture, and murder of villagers.

Meanwhile, with just three days to go before elections are held, the government's election commission disqualified current deputy minister for railways Pe Than as a candidate of the pro-junta Union Solidarity and Development Party (USDP), which is widely expected to win the polls, the first in 20 years.

The Commission said that he had "alien nationality," as his father was an Indian citizen when Pe Than was born. 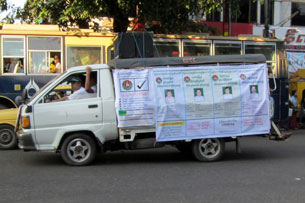 A USDP truck plays a campaign jingle while driving thru downtown Rangoon in an undated photo. RFA RFA
In Rangoon, Burma's former capital, residents are bracing for the elections with apathy tinged with apprehension.

"Apathy because they think the result is a foregone conclusion. Apprehension because they don’t know whether there will be any widespread protest," according to one resident.

Police are not evident in force around the city, but the streets are full of plainclothes agents on the lookout for potential troublemakers, the resident said, speaking on condition of anonymity.

Rumors are also spreading of a potential curfew, residents said.

Another unconfirmed report said the government is trying to turn Friday’s Hindu celebration of Diwali, the festival of lights, into a three-day holiday weekend to keep business and commerce to a minimum amid the elections.

Hotels are discreetly warning tourists not to go to crowded public places on election day. Schoolchildren report being told that there may be no classes Monday, Tuesday, or Wednesday depending on "the situation."