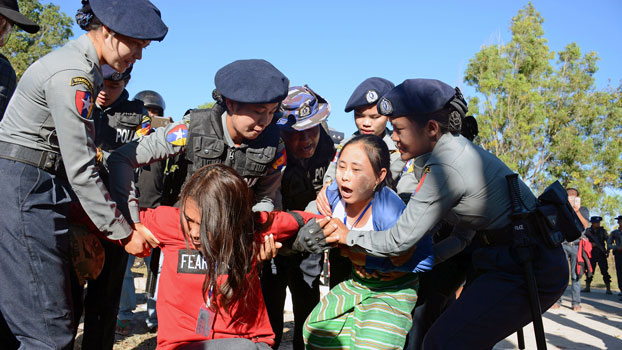 Police in eastern Myanmar’s Kayah state this week broke up protests by ethnic Karenni youths calling for the removal of a newly inaugurated statue of national independence hero General Aung San in the state capital Loikaw, charging dozens with unlawful assembly, a group whose members participated in the demonstrations said.

Authorities arrested the protesters on Monday, Thursday, and Friday as they staged sit-ins outside the state headquarters of the ruling National League for Democracy (NLD) party, the Union of Karenni State Youth said on its Facebook page.

NLD party supporters plan to celebrate what would have been Aung San’s 104th birthday on Feb. 13, according to the Myanmar Times.

Those arrested have been charged with violating Article 19 of Myanmar’s Peaceful Assembly and Peaceful Procession Law, which allows public demonstrations only if organizers first obtain permission from local authorities. Some have also been charged with defamation and incitement.

Some friends of those who were re-arrested on Friday said those protesters have not yet been freed on bail.

Calls by RFA’s Myanmar Service to a police station in Loikaw went unanswered.

Aung San, father of current State Counselor Aung San Suu Kyi, played a key role in freeing Myanmar from British colonial rule 70 years ago and in signing a pact with ethnic minority leaders to grant their groups ethnic autonomy within the independent nation. But decades of civil war have prevented successive governments from forming a federal democratic union.

Members of the Karenni minority in Kayah state first protested in July 2018 when officials announced that they would erect the expensive bronze statue of Aung San in a public park in Loikaw.

They began their protests anew this week in response to the state government’s inauguration of the monument to the military leader, who came from the country’s ethnic Bamar majority.

“Young people have respect for General Aung San,” said Kyaw Htin Aung, a leader of a technical group that supports the Union of Karenni State Youth.

“[But] it’s time now to implement General Aung San’s promises,” he said. “Opposition to building the statue has emerged because we think the [government’s] focus should be on equal rights for ethnic minorities rather than statues.”

Political observer Than Soe Naing asked why officials should erect a statue of Aung San in ethnic minority states like Kayah, which have their own local heroes.

“It’s damaging to General Aung San’s reputation to forcibly build the bronze statue and ignore people’s wishes,” he said. “I don’t think they [officials] should do that.”

“But it was ignored, and they built it,” he said, adding that additional monuments will also be built.

“I totally oppose the plan,” he said. “If they keep doing this, there will be more differences between the ethnic groups and the government of Daw [honorific] Aung San Suu Kyi.”

Myanmar’s de facto leader is spearheading the country’s sporadic peace talks in a bid to end fighting between ethnic armed groups and the national military and to create a federal system in the country.

Myanmar has not guaranteed ethnic people self-determination and autonomous rights since its independence in 1948, said political observer Yan Myo Thein.

“That’s why we haven’t had peace in the country up to now,” he said.

“It’s important to hold talks with leaders of Myanmar civil society organizations, ethnic leaders, and military leaders for building a federal democratic union,” he said. “If you consider it like this, then we need to stop building General Aung San’s statues in ethnic states without their willingness.”

Ngo Than Kap of the Chin Progressive Party in western Myanmar’s Chin state, said “All of us from ethnic states respect and recognize General Aung San, but it is more important to work on implementing his promises, such as equal rights for ethnic [minorities] and self-determination.”

“If not, what is the benefit of erecting his statue?” he asked. 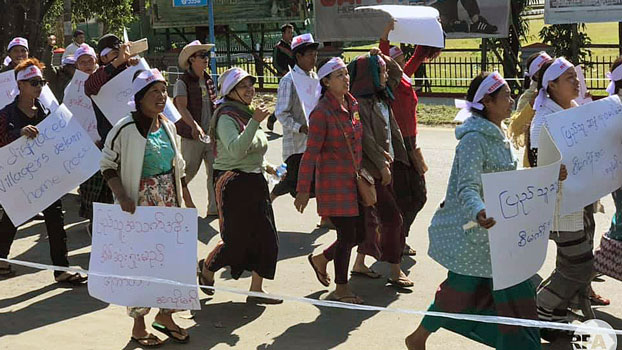 Meanwhile, police in Kachin state have arrested the organizer of a mass protest against a controversial dam project held on Thursday, charging her with violating Article 20 of the Peaceful Assembly and Peaceful Procession Law, according to a local resident.

Though the project was suspended in 2011 because of widespread opposition to its expected environmental and social impacts, China has pressed the current NLD government to allow it to resume.

Police said protesters were issued a permit to hold the rally, but they did not obtain official permission to use loudspeakers, wear headbands saying “No Myitsone Dam,” and make speeches, according to a Myitsone area resident named Lura who participated in the protest.

The Peaceful Assembly and Peaceful Procession Law requires protest organizers not only to notify local authorities of demonstrations in advance, but also to provide information about slogans and speakers.