BANTEAY MEANCHEY, Cambodia—Several hundred villagers here recently faced down armed police threatening deadly force in the midst of a dispute with the government, which wants to evict them.

Such scenes have echoed in violent clashes between villagers and authorities around Cambodia in recent weeks, in which at least eight people have been detained. 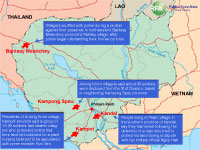 Villagers scuffled with police during a protest against their presence in northwestern Banteay Meanchey province’s Palelay village, after police began dismantling their homes by force Dec. 20, a spokesman for the protesters said.

“They threatened the villagers and said that they would shoot at anyone who was opposed to them,” Touch Narin told RFA’s Khmer service. “They infringed our rights, so we protested in the night.”

Many villagers said they had protested on the night of Dec. 20 near where police were stationed, demanding the authorities pull them out of their village after they dismantled their houses and made death threats against them, he added.

“The soldiers are still acting up against the villagers. So both men and women, young and old, and students, shouted along the road, insisting the soldiers be pulled out immediately,” Touch Narin said.

Clashes in the south

In the south of the country, villagers in Kampot province said a group of 10-20 soldiers had beaten villagers who protested orders that their land be bulldozed for a plant nursery believed to be associated with prime minister Hun Sen.

“There was a conspiracy,” one resident of Anlong Krom villager in Chhouk district said. “Sim Chhaya and Chea Sarorn ordered the villagers’ land to be bulldozed and mobilized soldiers. The villagers called upon each other to stop their activities. They beat the villagers who came to stop them.”

“The soldiers shot twice into the air to threaten the villagers. Almost 30 armed soldiers were mobilized. The soldiers stood guard and pointed at where should be bulldozed,” the man said. Residents said the soldiers were deployed from the 31st Division, based in neighboring Kampong Speu province.

Chin Thavy, who was three months pregnant at the time of the Dec. 21 clash, suffered a miscarriage after trying to stop her niece from being beaten by soldiers, she said.

“They pushed me when I was helping my niece, who was being beaten during the brawl. And then I called for help. When I arrived home, I found out that I had suffered a miscarriage. During the brawl, there were as many as 20 or 30 soldiers surrounding us,” she said.

The soldiers shot twice into the air to threaten the villagers. Almost 30 armed soldiers were mobilized. The soldiers stood guard and pointed at where should be bulldozed.

Soth Tum, 59, said he too was badly beaten in the incident.

“They held my hands to the back. About four or five soldiers surrounded me. I couldn’t move and they beat me twice on my calf. They didn’t hit my head but just slapped from the back. Now everywhere on my body hurts.”

Local authorities say they are trying to mediate land disputes.

The Banteay Meanchy provincial deputy governor, Sok Sareth, said he would order the police not to harm the villagers, and would postpone development plans for fear of social unrest.

“As reported, I have ordered the postponement now that the people have got irritated. We will do bit by bit,” he said. “We will build houses for them to live in temporarily. If they get affected, we will wait a bit, and consider.”

Disputes over appropriation of land by the authorities for development are handled in Cambodia by the National Land Authority.

People living in Peam village in the southern province of Kandal say they fear arrest following the detention of a man who tried to protect his land during a dispute with the military top brass.

“Ngoy Hak, also a high-ranking military official, said he was in pursuit of me,” according to the uncle of Ly Hok Yeng, who was detained Dec. 15 by a truckload of soldiers without an arrest warrant and sent to Kandal provincial prison.

Ngoy Hak is a high-ranking military official in the capital, Phnom Penh, and Ly Hok Yeng was sent to jail over a 12-hectare plot of land, he added.

“They are still threatening that five more people [will be arrested],” he said.

The head of Ly Hok Yeng’s commune, Tes Yen, said that a warrant for Ly Hok Yeng’s arrest had been issued but that he didn't know on what grounds.

Sambuor Meas commune chief Tes Yen said: “He was in the group of so-called land brokers. Another group took the money in advance but he didn’t have the land for the buyer, so he was arrested.”

He added that on Dec. 20, Ngoy Hak would compensate the remaining 40 families who were also involved in the land dispute.

Local activists cited two land disputes in the area connected to the arrest.