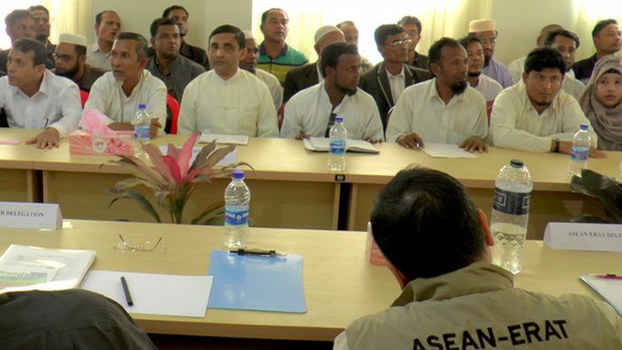 A week after Myanmar defended itself before an international court over allegations of genocide against Rohingya, a delegation from Naypyidaw tried to persuade refugees in Bangladesh to repatriate, but rejected demands for citizenship and international monitoring, officials and reports said.

Myanmar sent a delegation of nine along with seven representatives of the Association of Southeast Asian Nations (ASEAN) to the two-day meeting in southeastern Cox’s Bazar district that ended Thursday.

Members of the Myanmar delegation listened to concerns raised by Rohingya leaders, according to chief delegate Chan Aye, an official from Myanmar’s foreign ministry.

“We heard them, but they put forth some demands. Some of them impose really high standards,” he told reporters. “We explained the current situation in the Rakhine state. We want them to know our effort.”

“This is not a political dialogue. This is a discussion. We are here to listen to their concerns,” he added.

Among those representing the Rohingya at the meeting were Arakan Rohingya Society for Peace and Human Rights chairman Muhib Ullah and secretary Syed Ullah.

“We have been demanding our long-denied citizenship and we want to be recognized as Rohingya,” Syed Ullah told BenarNews, an RFA-affiliated online news service. “We also demand safety and security once we get back to our homes.”

“We have been discussing all these issues for the last two days but it ended without any result. We feel as hopeless as we felt before.”

Another Rohingya leader said the Myanmar delegation offered to accommodate refugees in camps in Rakhine state instead of their former homes and give National Verification Cards (NVC) to them.

The Rohingya and rights groups have said that the NVC, which describe the holders as “foreigners,” need to be abandoned.

In addition to saying no to citizenship, the Myanmar delegation rejected a second demand calling for international monitors to observe the Rohingya return to the Rakhine state, the Dhaka Tribune reported.

“The Myanmar side unequivocally said that there will be no international presence. Everything will be done by us,” said a foreign ministry official who attended the meeting, according to the newspaper.

Since a government crackdown in August 2017, about 740,000 Rohingya fled to camps in the Cox’s Bazar region of Bangladesh, pushing the refugee population to more than 1 million.

Previously, Myanmar delegations met with Rohingya in April 2018 and in July this year.

The Myanmar delegation was expected to brief government officials in Dhaka about the discussions during the two-day meeting, according to the director general of the South Asia Division at Bangladesh’s Ministry of Foreign Affairs.

“We are expecting to get their feedback following the meeting, and later we will let them know our position,” Md Delwar Hossain told BenarNews.

Meanwhile, an analyst raised concerns about the delegation’s actions.

Tarek Shamsur Rehman, a professor at Jahangirnagar University, said Myanmar was using the visit to bluff the international community.

“Now that the first phase of the judicial process is over regarding the Rohingya crisis, and a verdict may be issued at any time, Myanmar … resorted to a dishonest attempt by sending a delegation,” Shamsur Rehman told BenarNews. “Myanmar is trying to convince the world that they are interested in Rohingya repatriation and they are working relentlessly with this end in view.”

He said the government of Aung San Suu Kyi should announce clearly that Rohingya would get their long denied citizenship.

A delegation led by Aung San Suu Kyi spent three days at the International Court of Justice in The Hague, Netherlands, last week. Lawyers for plaintiff Gambia took her to task for her silence over the Rohingya’s plight, such as failing to mention the ethnic group by name and ignoring testimony on indiscriminate killings, mass rape, torture, and community burnings during the campaign of violence in Rakhine.

The West African nation brought a lawsuit on behalf of the Organization of Islamic Cooperation accusing Myanmar of violating the 1948 Genocide Convention during its expulsion of Rohingya.

In Cox’s Bazar, the Myanmar delegation also met with Hindu refugees at the Kutupalong camp, where refugees said they would be willing to return, according to a representative of the Hindu group.

“We told them we are interested in returning home. We have no demands except that they ensure our security,” Shishu Shil told BenarNews.