Laos’s Xiangkhoang province has little land left to give away.
2012-05-31
Tweet 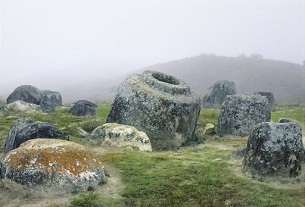 Part of the Plain of Jars site in northern Laos’s Xiangkhoang province.
hemis.fr

Laos has suspended land concessions in tourism-driven Xiangkhoang province's towns even though nearly all the land in them has already been taken up for development, as the country rapidly exploits natural resources through foreign investments, officials said.

The province, home of the famous Plain of Jars archeological site, has over the past three years given many land concessions to foreign investors for carrying out development projects.

In the province’s urban areas, there is little land that has not been granted away, an official said.

“There is no more land in the towns, no more land for concessions. There’s nothing left,” a provincial official told RFA Thursday, speaking on condition of anonymity.

Xiangkhoang is mostly a rural province, with a population of about 37,000 in its biggest city, the tourism hub of Phonsavan, but under Laos’s land classification system, towns in the province count as urban land.

The official said that the Lao government has ordered concessions suspended in Xiangkhoang’s towns but that there is still plenty of land available in rural areas.

Laos, one of the least developed Southeast Asian states, has become  the subject of massive foreign investment, especially from companies from neighboring China, Thailand, and Vietnam.

Much of Laos’s economic growth has come from land concessions for natural resources—including timber, agricultural products, minerals, and energy—but some worry that it comes at a cost for those who lose their land.

'Both good and bad'

Since all the land in Laos is owned by the state, residents can be forced off their land with little compensation as they are pushed out to make room for development projects.

“Land concessions are both good and bad; they’re good because they allow the economy to grow fast, but bad because they takes over people’s land,” the Xiangkhoang official said.

In the Lao capital, Vientiane, which is about five times as big as Phonsavan and where authorities are implementing a new city development plan to accommodate the expanding population, real estate prices have soared as investors buy of land for resale.

Anticipating higher values, they are scrambling to buy up areas of Vientiane where the government has planned to build new road and satellite cities, residents say.

Nationwide, Laos had at least 2,000 land concession projects in 2009, although many of them have not yet been developed, the Vientiane Times said.

The Lao government has considered suspending mining and land concessions several times in the past five years, but so far has not put the policy into practice, the newspaper said.