The Southeast Asian country wants to ride the wave of regional connectivity to boost growth.
2012-05-31
Tweet 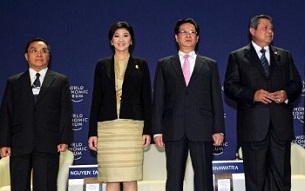 Lao Prime Minister Thongsing Thammavong (l) with leaders (from l to r) of Thailand, Vietnam, and Indonesia at the opening ceremony of the World Economic Forum in Bangkok, May 31, 2012.
AFP

Laos, the poorest Southeast Asian state, is expected to expand its economy rapidly and shave poverty substantially over the next five years as it beefs up its infrastructure to turn the landlocked nation into a land-linked one, Prime Minister Thongsing Thammavong said Thursday.

Speaking at the World Economic Forum on East Asia in Bangkok on the theme of “Shaping the Region's Future through Connectivity,” he forecast that Laos could chalk up eight percent economic growth annually in the next five years and slash poverty to less than 10 percent by 2015.

He said the country is banking on boosting its road, railway, and other transportation links with Thailand, China, and other countries— extending eventually to India and Singapore—to gain from the regional economic expansion.

“The Lao PDR attaches great importance to connectivity, and we are undertaking the implementation of a policy to transform [Laos] from a landlocked to a land-linked nation with its neighboring countries, in order to contribute to our national social and economic development and poverty eradication,” Thammavong said.

He said the bridges, roads, and railways already built to connect Laos with its neighbors have made “important contributions” to the country’s social and economic development, helping annual economic growth reach 7 percent and reducing the poverty rate from 33.5 percent in 2005 to 26 percent in 2010.

The Association of Southeast Asian Nations (ASEAN) has launched a master plan to build physical, institutional, and people-to-people “connectivity” as China also pours millions of dollars to build an extensive network of roads and railways that will solidify links with the growing region.

Through further connectivity, Laos hopes to overcome its “daunting challenges” and graduate from least-developed country status by 2020, Thammavong said.

But one important factor supporting closer regional integration will be the narrowing of economic gaps among Association of East Asian Nations (ASEAN) member countries, he said.

“My hope is that in the future we shall do whatever we can to make ASEAN achieve the goal of narrowing development gaps in all aspects, so that ASEAN is one community with unity and solidarity,” he said.

Laos is the most backward of the group’s 10 member states, which have set a goal of creating an integrated ASEAN Economic Community by 2015, transforming the region of 600 million people into a single market and production base.

While Laos, a one-party communist state, moves to step up development, rights groups complain of government repossession of land from the people and other human rights problems, including lack of political freedom, harsh prison conditions, and rampant official corruption.

At the Bangkok forum, attended by over 630 participants from 50 countries, Thai Prime Minister Yingluck Shinawatra stressed in her speech at the opening ceremony that stronger economic ties would help the region through tough times.

"To address the challenges of global economic turmoil, we must continue promoting regional cooperation and integration,” she said, as the current crisis over the euro shakes Asian markets and threatens to slam the brakes on growth.

“Regional cooperation and connectivity are also a factor in … Asia’s dynamism and helping it build resilience against outside shocks, particularly the 2008-2009 financial crisis and economic slowdown,” Dung said.

He added that current coordination mechanisms in the region “are not efficient and integrated enough.”

Burmese opposition leader Aung San Suu Kyi, who is in Bangkok on her first trip abroad in 24 years, is expected to address the forum Friday.