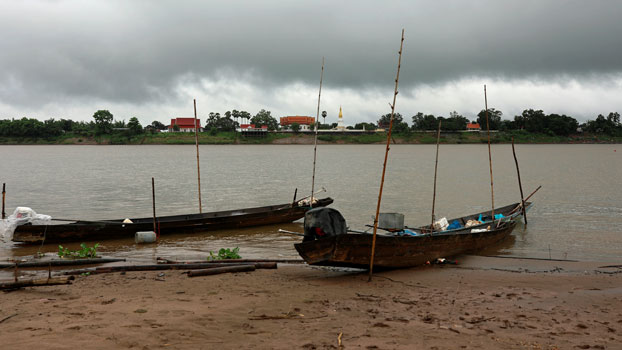 A pagoda in Laos is seen in the distance under a rain cloud from across the Mekong River in northeastern Thailand's Nakhon Phanom province, July 24, 2019.
Reuters

Lao farmers have planted rice on less than half the country’s cultivable land this year because of a persistent drought in the Mekong River region that has seen severely reduced water levels and the delay of seasonal monsoon rains which have yet to begin.

Growers have been able to plant rice on roughly 40 percent of the country’s 850,000 cultivable hectares, according to a recent announcement by Laos’ Ministry of Agriculture and Forestry.

More than 60 percent of Laos' arable land is used for cultivating rice, a key staple food for Laotians. Most of the top rice-producing provinces are located along the Mekong River, and nearly all rice production occurs during the rainy season from late May to late September.

An official who works at the Agriculture and Forestry Department in northern Laos’ Luang Namtha province told RFA’s Lao Service on Thursday that farmers have only been able to plant rice on just over half of the total amount of cultivable land there.

“According to a recent report, the province has a total of 9,678 hectares of cultivable land, but we’ve been able to plant rice only on 5,296 hectares because it’s too dry,” said the official who declined to give his name.

“It’s not raining, [and] the irrigation system is dry,” he said. “Even the rivers are dry.”

This year’s rice production will be more than 17,500 tons short of last year’s amount, he added.

More than 7,000 hectares of rice fields have been affected by the drought in Vientiane province, according to an official from the local Agriculture and Forestry Department.

“Up to now, rice has been planted on 37,963 hectares, but 2,271 hectares of those have become too dry,” he told RFA. “As a consequence, all the rice that had been planted has died.”

An additional 4,800 hectares is too dry to plant rice, he said.

“It has not been raining,” said the official, who declined to give his name. “All rivers, creeks, and streams are also dry with no water for farmers to irrigate their rice fields.”

Provincial authorities are making extra rice seed available to farmers, though this may not help if the drought continues, he said.

“If it doesn’t rain soon, authorities will donate the seeds to farmers to replant,” the official said. “But if it’s too late, the authorities will recommend that farmers grow other crops that require less water.”

In central Laos’ Borikhamxay province, a young farmer told RFA: “We rely only on nature. Sometimes, it rains too much, and it floods. Sometimes, it’s too dry. This year, we planted rice early last month, but now it has all died because of the lack of water.”

A farmer in the Pak Song district of southern Laos’ Champassak province said that residents there have not planted any rice yet.

“We’re waiting for rain,” he said. “The irrigation system isn’t any help because all the rivers are dry. Usually, we finish planting rice in June, but now it’s already late July, and we haven’t planted any seeds yet.”

Growers in in northwestern Laos’ Oudomxay province, meanwhile, have been able to plant rice on about 60 percent of the area’s 16,200 hectares of cultivable land, while those in Khammouane province in the central part of the country have been able to plant on nearly 90 percent of the area’s 84,000 cultivable hectares, according to agriculture officials.

Low water levels in the northern Mekong River have made the key transport artery impassable for boat traffic due to the drought. Chinese and Thai cargo ships have been unable to navigate between the town of Luang Prabang and the Golden Triangle, where the borders of Thailand, Laos, and Myanmar meet at the confluence of the Ruak and Mekong rivers.

“The drought is severely affecting the navigation,” a transportation official in Luang Prabang told RFA on Friday. “Boats can’t go up and down, and goods are not coming in. The Mekong River is too dry.”

Bounthong Souvannahan, deputy director of Laos’ Meteorology Department, said this year’s rainfall in the country has been only half of what it was up to this time in 2018, and that Chinese and Lao dams have released only 50 percent of the amount of water they usually release this time of year.

Hydropower dams along the Mekong, such as Laos’ Xayaburi Dam and China’s Jinghong Dam, are holding back water for their own purposes, exacerbating the problem for farmers and residents downstream who depend on the river for their livelihoods.

The Jinghong Dam is discharging only 600 cubic meters per second, half of what it usually lets out, Bounthong said.

The Lao government has called on agricultural officials to come up with solutions to the drought and to alleviate conditions caused by low river levels that have affected rice and other crops in the landlocked and impoverished country.

The drought is one of six critical issues affecting the Southeast Asian nation’s socioeconomic development that were cited by the government cabinet at a meeting on June 23-24 in the capital Vientiane.

The country is also wrestling with a deadly outbreak of dengue fever, an African swine flu epidemic, a worm infestation of sweetcorn crops in Xayaburi province, the falling value of the Lao kip and the depletion of foreign-exchange reserves, and public criticism of the state administration on social media, the Vientiane Times reported.

Laos, please Laos don't complain much. Souphanouvong - that red prince of yours - sold your country to Vietnamese because of love. And your new party-state sold it now to Chinese because of greed. Can you for once die in silence ? RIP.

If it wants to China could kill all down stream countries of Mekong. Holding back and releasing water will be part of Chinese policy to bring neighbors down to their knees. Myanmar,Laos, Thailand, Cambodia and Vietnam you'll have a good time with China. Claps, claps !

THEY ARE WAITING FOR THE RAIN OH BOY! HOW THEY KNOW IF SOMEONE WILL SEND THEM THE RAIN? They know how to block water for their DAMS Why don't they know how to block water for their rice farms? The problems are The water do not flow naturally anymore so the water stay where they do not need and the Water can not flow to where they need and CAN THEY USE MONEY THEY MADE FROM ELECTRICITY DAMS TO BUY RAINS FOR ONE SEASON?