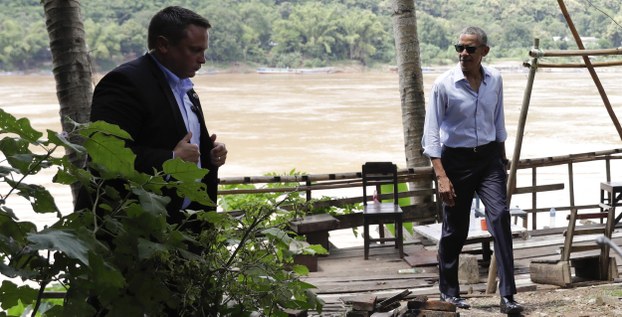 With a member of his secret service detail accompanying, U.S. President Barack Obama walks near the Mekong River in the Luang Prabang, Laos, Wednesday, Sept. 7, 2016.

The Mekong River Commission (MRC) Wednesday defended its decision to wait nearly seven weeks before officially notifying the public that Laos began a preliminary procedure for the construction of a large dam that would be its fifth on the Mekong river.

The Lao government informed the Mekong River Commission (MRC) on July 31 that it submitted the Luangprabang hydropower project to undergo the six-month prior consultation process under the MRC’s Procedures for Notification, Prior Consultation and Agreement (PNPCA).

The MRC Secretariat, when asked by RFA to explain the delay, said that in prior projects it made quick announcements to the public.

“But it came without any available project documents as well as easily accessible documents (such as project overview and roadmap for consultation) to help the public understand better the project and consultation process,” said the secretariat in an email.

“Having learned from experience, this time, we have planned to officially announce to the public with all the necessary documents so that the public and related stakeholders can study and contribute to making the process more meaningful. We will maintain the same level of openness and transparency to the public throughout the process,” the Secretariat added.

The Secretariat also said that representatives from Laos, Thailand, Vietnam and Cambodia will meet on October 8 to decide when the six-month process would begin as well as other issues regarding the process.

“Throughout the six-month process, we will keep related stakeholders informed, consulted and involved. We have made efforts to reach out to various stakeholders to work together to make the process meaningful regardless of ones’ views on the project,” said the Secretariat.

Brian Eyler, the Southeast Asian program director for the Stimson Center said that he found the delay “interesting.”

“This dam will be the first joint Thai-Vietnam project on the mainstream and it is extremely striking and uncharacteristic for Vietnam to move forward on a Mekong mainstream dam given that Vietnam's government and active civil society organizations have been unified against mainstream Mekong dams to date,” he added.

The decision to build yet another Mekong river dam has dismayed international observers.

“I am disappointed by Laos’ decision,” said Maureen Harris, the Southeast Asia program director for International Rivers in an email with Al Jazeera.

"The scientific evidence on the cumulative impacts of these projects is clear. Major impacts include destruction of fisheries, loss of sediment and alterations in flow patterns--jeopardizing the food security and livelihoods of river basin communities," she said.

Eyler expressed his concern over the project, given that Laos has its hands full with two other Lao Mekong river dam projects.

“Will this dam be another white elephant project for the government of Laos?” he asked.

“The two previous mainstream dams submitted by the Lao government to the MRC at Pak Beng and Pak Lay are either suspended or years away from development. Why agree to a third when the other two are entwined in controversy?“ he added.

“And why agree to a third unbuilt Mekong mainstream dam when clearly the Xayaburi dam's operations in June exacerbated downstream drought conditions?”

The entire Mekong region experienced a prolonged dry season that lasted well into what should have been the rainy season this year. This caused upstream dams to hold more water, worsening the drought in areas downstream.

Eyler also said that if Luangprabang dam is built, Laos would lose the Mekong’s scenic beauty that has “served as a backdrop photos of Barack Obama's 2016 visit to Luang Prabang and countless sunset photos of millions of visitors.”

RFA’s Lao Service contacted Ch. Karnchang, the Thai developer for the dam project, which could not disclose any details about the project.

“As we said, we still cannot disclose information about any new project, about Luangprabang dam. We’re in the process of negotiating with the Lao government, which has asked us not to say anything about this project yet,” an official of the company’s PR department said on Wednesday.

An official of Luangprabang province told RFA yesterday, “According to the plan, Luangprabang dam will not cause any problems for navigation along the Mekong river because they will build a very modern gate through the dam.”