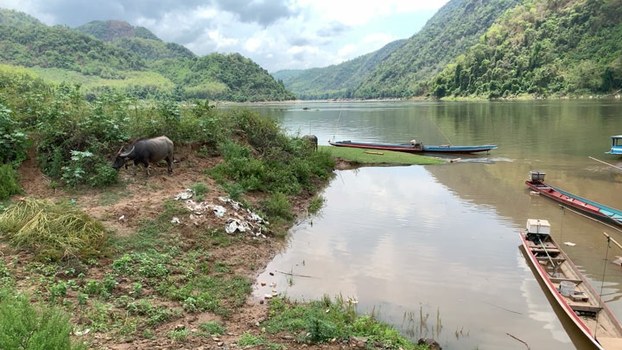 Boats moored on the banks of the Mekong River in Laos, near the proposed site of the Luang Prabang Dam in an undated photo.

Bufflaloes wallow in the shallows of the Mekong River, where farming villages cling to sandy banks and the occasional boat chugs against the current, carrying goods and passengers from the former royal Lao capital of Luang Prabang.

But an air of uncertainty hangs over the idyllic scene. Plans for a massive hydropower dam that could displace thousands of people appear to be advancing as Laos rushes headlong to realize its ambition to become a power-generating hub for Southeast Asia.

Villagers say surveys for the project have begun and plans are afoot to relocate them, possibly within months, to make way for the latest in a cascade of dams that could transform the lower Mekong, upon which millions of people in Laos, Thailand, Cambodia and Vietnam have depended for fishing and farming for generations.

Radio Free Asia recently visited two villages in the area of the proposed Luang Prabang dam, about 23 kilometers (14 miles) north of the famed tourist spot and world heritage site in northern Laos, nestled in a steep-sided, forested valley cleaved by the river.

The Lao government signed a memorandum of understanding with state-owned Vietnamese company, PetroVietnam Power Corp. for the Luang Prabang dam in 2007. It finally appears to be moving forward with the involvement of a major Thai construction company, Chart Karnchang Thai, which is already involved in construction of another hydropower project further downstream, the Xayaburi Dam, which is slated to enter operation this year.

“They (the project) have come doing an economic impact assessment in our village, but they haven’t compensated us yet,” said one villager, who lives in a simple cinder block home with an outdoor kitchen and a back yard that looks out onto banana trees and the river bank beyond it--close to where the dam would be located.

“They are assessing costs of paddy fields and fruit trees, also finding the new plots and new land to allocate,” she said. Villagers there had been told they would get word on resettlement in October.

“I really don’t want to move out, but I have to,” said an elderly man in another, nearby riverside village who did not know when a decision would come. “The provincial party orders us to be relocated. Other villages will move out, so we have to as well. We cannot resist.”

The proposed location of the Luang Prabang dam lies near the boundary of two districts: Pak Ou and Chomphet. A labor and social welfare official from Chomphet district said that six villages will be relocated.

“The project is clearing the new land for relocation, but it is not done yet. We do not know when the villagers are to move out. It is a big dam so the project has started work earlier and is now assessing the compensation for each household,” the official said. 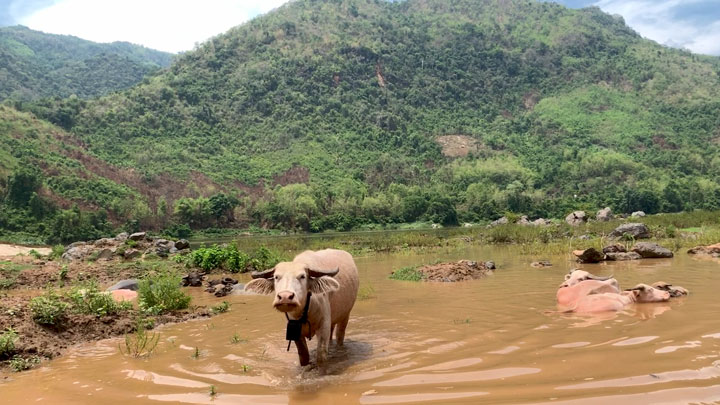 Water buffaloes stand in the shallows of the Mekong River near the proposed site of the Luang Prabang Dam in Laos in an undated photo. Credit: RFA

Fifth Lao dam on the Mekong

RFA is concealing the identities of the local people interviewed for this report to protect them from potential repercussions from authorities, who have yet to publicly announce their intentions and inform the Mekong River Commission, an intergovernmental body that monitors the development of dams and the use of water resources on the 4,350-kilometer (2,703- mile) river.

If it goes ahead, the Luang Prabang dam would be the fifth dam Laos is planning on the mainstream of the Mekong--and potentially the largest so far among a cascade of nine that have been slated for development on this stretch of the river in Laos, whose communist government views the sale of electricity to its neighbors a ticket to prosperity. They are 11 large dams either proposed or under construction on the mainstream of the lower Mekong River in Laos and Cambodia, with another 120 dams proposed to be built on Mekong tributaries by 2040, according to the NGO International Rivers.

Two of those dams--the Xayaburi Dam and the Don Sahong Dam--are under construction. Preparatory work has begun on another, Pak Beng, but the project is on hold as a power purchase agreement between Thailand and Laos has yet to be finalized. Laos has also notified the commission of its intention to construct a dam at Pak Lay, which lies south of the Xayaburi Dam.

The Lao and Vietnamese leaders agreed in principle in April 2018 to continue support for development of the Luang Prabang dam, and this month, PetroVietnam Power reported that it held a workshop on project, which it described as symbolic of the friendship between Vietnam and Laos.

The two communist regimes have historically strong political ties, although Vietnam’s economic clout has been eclipsed in recent years by a flood of investment into Laos from strategic rival China.

PV Power’s annual report for 2018 says it expects construction of the 1,400 megawatt Luang Prabang dam will take place between 2020 and 2027. It says expected investment will be $5 billion, of which 30 percent will be equity and 70 percent will be loans. It describes the investor as “a legal entity, which is a project company in Laos when the license is officially issued on (the) project, of which 38 percent of the charter capital comes from PV Power.”

The PetroVietnam Power Corporation did not respond to a request for comment to elaborate on those details and its plans for the dam, including who would buy the electricity it produces.

Maureen Harris, Southeast Asia program director at International Rivers, said Chart Karnchang Thai has in the past year indicated its interest in securing the rights to develop a new hydropower project after the Xayaburi dam. Possibilities include the Luang Prabang dam, but also the proposed Pak Beng and Pak Lay projects.

A staff member at the Thai construction giant, speaking to RFA on condition of anonymity, said it is in charge of the design and environmental impact assessment for the Luang Prabang dam, but offered few details. RFA observed two Thai personnel at one of the villages it visited. 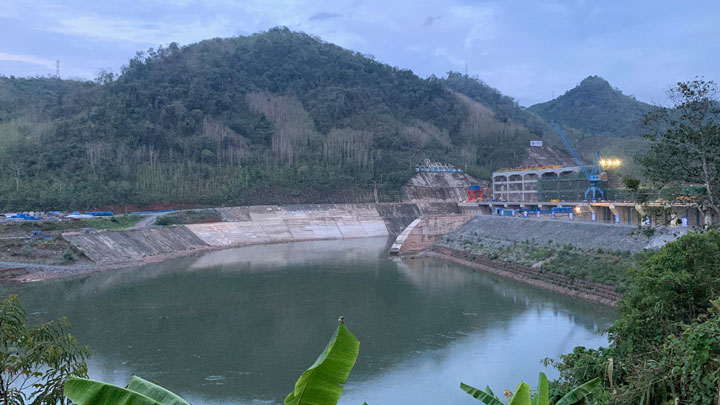 A Chinese-backed dam under construction on the Nam Ou River, a tributary of the Mekong River in Laos' Luang Prabang province, in an undated photo. Credit: RFA

No prior consultation yet

The Mekong River Commission told RFA that Laos had not yet initiated the process of “prior consultation” whereby a country proposing a project on the mainstream of the river notifies the other countries in the grouping before going ahead with the project. Prenotification would initiate a six-month evaluation where member states can assess the possible impact of the dam on ecosystems and livelihoods and suggest remedies.

“There has been no official notification yet on the Luang Prabang dam to the MRC. I believe studies still being carried out on the project," Anoulak Kittikhoun,
chief strategy and partnership officer at the Mekong River Commission, told RFA.

While no physical work such as relocating people should take place before notification to the commission, a dam developer has due diligence to conduct before it would be ready to tell the Lao government that a project is ready to move forward. That could go some way toward explaining the current activity at villages near the dam site. Due diligence could include scoping out a resettlement program and doing an environmental impact assessment.

Most critically, there’s been no word on a power purchase agreement for the Luang Prabang dam, which would be required to secure financing. Laos is also still picking up the pieces following the worst dam disaster in its history, when an auxiliary dam at Xe Pian Xe Namnoy, a South Korean-led hydropower project in southern Laos, collapsed in July 2018, killing at least 40 people. Thousands of displaced people are still waiting to be resettled.

Harris said because of the controversy surrounding Mekong dams, developers now have an interest in seeking approval for their project before publicizing information about it.

She noted that past studies indicated that the Luang Prabang dam would require the resettlement of more than 12,000 people, but she added that those plans might be updated. The dam, more than 60 meters high, would form a 90-square-kilometer (35-square mile) reservoir, according to a 2010 strategic assessment by the Mekong River Commission which concluded that the total of 11 mainstream dams planned for the lower Mekong could cause “serious and irreversible environmental damage.”

Harris said local communities could face a difficult transition to new lives in resettlement sites, and the Luang Prabang dam could potentially impact a world heritage site downstream. Beyond that, the project could affect the flow of the Mekong, which has already been hit by China’s construction of dams on the upper reaches of the river. She said there’s been a dearth of study on the cumulative impact that a “cascade” of dams would have on the environment, farming and fishing in the region.

“There are serious questions around the trade-off involved in economic benefits relative to the long-term sustainability of the Mekong River system,” Harris said, “not just for people in Laos but across the whole of the Mekong basin.”

With the projections raising the dams in Lao PDR, perhaps to consider free education for villagers and youths for courses related to hydrology, hydroelectric power (in technical/vocational/engineering) to join them in their progress, in this way will be more visualized, monitorable and control the events that take place.

All the previous dams built have not solving much of the problems, its only increased hardship for the local peoples. They've not appropriately compensated all the resettling folks from previous dams and plantations concession and still wanted to build many more dams. Hello, companies, investors and Laos government; if you don't have enough money/fund to compensate, provide assurance to protect against accidental disaster and environmental impacts than don't do. Other simple solution for the sake of development: Sign a contract that will benefit the country, the people and the investors and immediately compensate the effected people, it's so simple(unless the company don't have the money for the project upfront or the government withheld the money for themselves or allocated to other project). Common...LPDR, THIS IS A 5TH GRADE MATH.

No matter how many more Dams in Laos they are building They will always say for Poor Lao people and to improve their living condition. To do that only one Dam is more than enough They should say for their own pockets and to wipe out poor people indirectly by creating a trap Disaster to wipe them out and stolen their Land