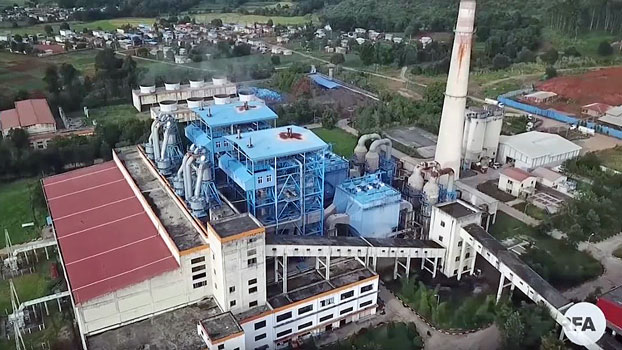 Residents of Tigyit village tract in Myanmar’s northern Shan state are up in arms over the central government’s decision in August to extend the operation period of a Chinese-owned coal-fired power plant that they say has exceeded land use specifications, severely polluted the local environment, and jeopardized their health and their livelihoods.

The mine and the coal-fired power plant were temporarily closed in 2014 because they failed to meet local legal requirements regarding the environment amid growing complaints by residents about the impact of mining waste on the local environment, according to rights group Burma Campaign UK.

But according to the Pa-O Youth Organization (PYO), a local civil society group, the plant was shut down because its two 60-megawatt turbines were not producing the targeted amount of electricity. After Wuxi Huaguang made the necessary engineering changes, the plant restarted operations in 2017.

The Shan state government says it buys between 2,000 and 2,500 tons of coal from the mine owned and operated by the energy and natural resources division of Eden Group of Myanmar Co. Ltd., which is excavating coal specifically for the power plant, and providing it free of charge to China.

The Shan state government buys back power from the plant and distributes it mainly to the southern part of the state.

Local residents who live near the mine and the coal-fired power plant in Pinlaung township of northern Shan state's Pa-O Autonomous Region have objected to both operations for years, primarily because the operators were limited to only 500 acres of land under the terms of their agreement with Shan government officials, and have exceeded that limit.

To make matters worse, earlier this year the mining area was expanded to more than 800 acres, with the operators piling mountains of waste byproducts directly behind people's homes, residents of Tigyit village tract said.

The heaps of coal waste have been mounting for almost two decades, they say, despite their ongoing opposition, negatively impacting the natural environment.

“They mine and come and pile it over here,” said resident Khun Win Htein. “At first, it was only a little. I didn't quite notice it, but that was a long time ago.”

Villagers suffered another blow this August when the Myanmar government granted the mine and power plant permission to continue operations for three more years, stoking even more fear.

Resident Sein Thaung fears that severe vibrations from the operations could spell disaster for community homes and infrastructure.

“Even the road shakes,” he said. “The doors shake. It shakes like you’ve been grabbed and shaken by a person. It’s worse for me because my house is close to the mine.”

Villagers also point to visible signs of the mining operations on their health and the produce that farmers grow to sell.

Ash from the Wuxi Huaguang coal-fired electric power plant has polluted local water resources that Tigyit village tract residents rely on for drinking water and irrigate their crops, they said.

“As they do their mining, the water gradually dries up,” said Khun Tun Sein. “Three or four years ago, in 2016, it dried up. It’s still drying up. It’s like this now.”

Villagers accuse the plant of discharging wastewater onto the land, thereby destroying their fields and resulting in a significant drop in the amount of fruit they can produce.

As a result, farmers in the Tigyit area say they receive less money for their substandard produce, leading to a reduction in their income.

The coal ash that covers the area has meanwhile caused respiratory problems that have sent some villagers to the hospital for treatment.

“They pile the coal dust here, so we have to breathe in a lot of it, and so we feel congested,” she said. “When I went to the hospital, the nurses there said that I have some heart problems.”

Power plant officials say wastewater from the operations flows through filters and is stored in a tank at the plant before being released into the nearby Tande stream.

“We grind the coal and burn it,” said plant manager Win Htay. “We store the ash from that in a warehouse, so that there’s no dust.”

During the past decade, villagers suffered from a range of health problems linked to the mining and power-plant operations, including high blood pressure, headaches, premature and underweight births, and skin diseases, the PYO said in a May 2018 statement about the plant's detrimental health and environmental impacts. 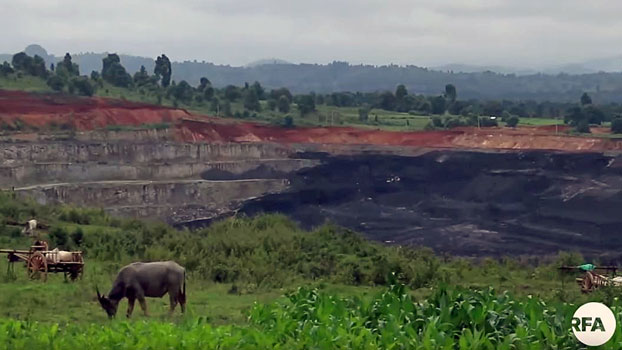 In the early days of the mining operation, authorities forced 400 people to move from more than 70 homes in the nearby villages of Taung Pola and Lai Khar, according to the PYO.

With the ever-expanding mining operation still gobbling up land, villagers say authorities have ordered some of them to move from the project area, but have failed to officially notify everyone about the relocation plan.

“They haven’t given us any compensation,” said villager Mya Aye. “So far, we haven’t had a chance to sign anything. No one has come to notify us either.”

Villagers said they found out only when authorities placed numbered iron rods in the ground around their homes to mark the project area.

Maya Aya said authorities have claimed that her official copy of Land Form 105, a document showing that she has paid tax on her land, is illegal in order to further justify the appropriation of the plot.

RFA asked the company if it does indeed have plans to expand the operation and take over the additional land in the village, but did not receive a response.

“Around Tigyit area, there was no [land] ownership before,” said resident San Lwin. “We have all been making a living here traditionally.”

The military-backed government of former Myanmar president Thein Sein, whose government from 2011 to 2016 first inked a deal with Wuxi Huaguang, owned by a Chinese national, to operate in the area of Tigyit village tract for 22 years.

The government initially granted it close to 500 acres on which it began building in 2002.

The current civilian-led National League for Democracy (NLD) government renewed the company’s operating permit in 2017 and 2018, and granted it permission in August 2019 to operate for an additional three consecutive years.

By 2019, the mine area increased to about 800 acres, pushing more people off their land and raising concerns that the operation will continue to expand and encroach upon the rest of the village now that the company can continue its business for another three years.

More power than before

Though local residents complain about the negative effects of the power plant, officials say that without it the region would be completely left in the dark.

“Because of the operation of this plant, we get more power,” said Sai Shen Taloun, Shan state’s minister of electricity and industry.

“Since there are two turbines at the plant, southern Shan state gets a lot more power than it did before,” he said. “Last summer, there was a lot less electricity. If this plant was not here, it could have been even less than that, so we have to continue operating it according to the need for electricity.”

Plant officials want the power plant to produce 120 megawatts of electricity per hour, though it has been producing 90 to 100 megawatts in the more than two years since it restarted operations.

Residents fear that efforts to meet the production goal will worsen the problems they already experience.

“Cracks have appeared on the ground in some houses,” said villager Sai Tu. “We went and saw them three or four years ago.”

“What we are more concerned about now is, for instance, well-known incidents of sinkholes [from coal-fired power plants] in Mon [state],” he said. “We’re wondering whether that can happen here.”

The Myanmar government’s agreement with Wuxi Huaguang says two percent of the profit from power sales should be directed toward corporate social responsibility to build and improve roads, water supplies, electricity, and schools.

However, local residents and some civil society organizations say that that is not enough.

Myanmar meanwhile continues to forge ahead with coal-fired power generation to increase its own lagging supply of electricity, especially in rural areas.

Reported by Zin Mar Win for RFA’s Myanmar Service. Translated by Than Than Win. Written in English by Roseanne Gerin.