Activists say the Thai government did not disclose its agreement to buy power from a planned Lao dam.
2012-05-31
Tweet 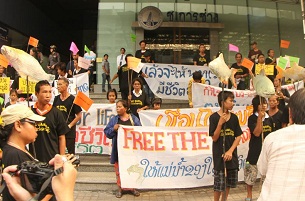 Activists protest the Xayaburi dam in front of the Ch. Karnchang headquarters in Bangkok, April 24, 2012.
RFA

A group of riparian communities opposed to the construction of a controversial dam on the Mekong River in Laos says it plans to sue the Thai government for signing an agreement to purchase power from the project without disclosing details to the public.

The Chiang Rai-based Lower Mekong People’s Network, which represents communities from seven different provinces in Thailand along the Mekong River, said they had collected signatures from around 300 people who say they will be negatively affected by the Xayaburi dam’s construction.

Based on these signatures, the group said it plans to file a lawsuit against the government for making a deal with the Lao government to buy electricity generated by the U.S. $3.8 billion dam upon its completion, without disclosing the details of the agreement to the public as required by Thai law.

The 1,260-megawatt dam would provide 95 percent of its electricity to Thailand.

A representative of the Lower Mekong People’s Network said the group plans to file the lawsuit in June this year.

“We have signatures from almost 300 Thai people from seven provinces,” the woman, who spoke on condition of anonymity, told RFA.

“When the day comes to submit the lawsuit, our group will go to court.”

The representative said that the Lower Mekong People’s Network had also submitted a letter to the Mekong River Commission (MRC), an inter-governmental body that manages development along the regional artery, requesting an update on the dam.

“Secondly, we have sent a letter to the MRC inquiring about the current situation,” she said.

Ch. Karnchang, the Thai company tasked with building the Xayaburi dam, signed an agreement at the end of April to push ahead with construction in defiance of a December ruling by the MRC which called for a comprehensive environmental impact study to more properly identify potential risks.

The group said they have received no updates on the project from either the Lao government or the MRC.

Earlier this month, Lao Vice Minister of Energy and Mines Viraponh Viravong said that the dam may have to be redesigned to avoid any adverse impact on the environment, citing a study from a French company hired to conduct an assessment of the dam.

The redesign, he said, would allow more river sediment to flow through the dam, a key concern for downstream countries whose agriculture depends on the river.

Ch. Karnchang only revealed in April that construction of the project in Laos had been stepped up from March 15. It said it expects to finish the project in eight years.

Reports indicate that preliminary construction work, such as the building of access roads, has been ongoing and affecting riparian communities in the vicinity. Over 3,000 residents near the dam site have been relocated to make way for the project, according to the Bangkok Post newspaper.

The Lower Mekong People’s Network, which claims that the dam will destroy the local economy of the communities along the banks of the Mekong, held a series of protests in Bangkok last month against the company and a group of Thai banks lending the firm funds to proceed with construction.

The group says the dam is likely to damage the Mekong ecosystem, fisheries, and food security of the people on both sides of the river.

The Mekong River originates in China and flows through Burma, Laos, Thailand, Cambodia, and Vietnam.  The silt deposits provide rich soil nutrients for rice and other crops.

In December, Laos and the three other MRC member countries—Cambodia, Thailand, and Vietnam—agreed work on the dam should be postponed pending the results of a new environmental impact assessment, which was to be conducted by Japan.

The decision followed a report by Swiss firm Poyry Energy AG, which was hired by the Lao government in May 2011 to review the dam’s compliance with MRC requirements.

In its final report submitted in August, the Swiss company found the project to be "principally in compliance" with the MRC's requirements, but international environmental groups said the study was flawed.

An earlier study by an expert group had recommended a 10-year moratorium on all mainstream Mekong dams due to a need for further research on their potentially catastrophic environmental and socioeconomic impact.

The non-educated peoples tend to use their freedom and rights in the wrong way.I don't think they understand what they are talking about.

I don't think so you can protest Lao Government. Why you worry about this? When China started to build the dam, why you did not protest Chinese Government? You have just started to say something to Lao Government. It is their land and not belong to you. Please understand this situation