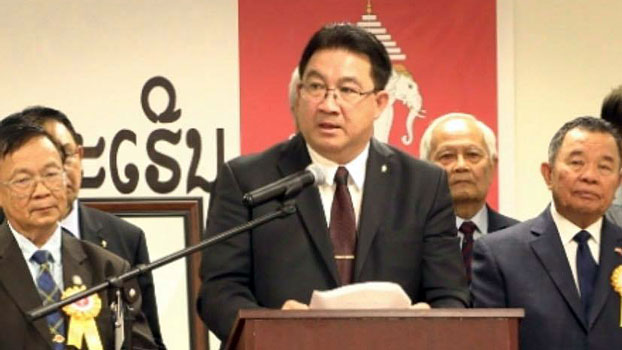 Eleven overseas Lao organizations that gathered for a conference in the United States have called for the release of a Lao woman who was arrested last month on charges of defaming the one-party communist country.

Houayheuang Xayabouly, known by her nickname Mouay, was arrested on Sept. 12 after she posted criticism on Facebook of the slow government response to floods on Sept. 5 in the country’s southern Champassak and Salavan provinces, sources told RFA's Lao Service in earlier reports.

The call to release Mouay came as part of a memorandum of understanding (MOU) signed by the leaders of the 11 member groups of the United Lao Council for Peace, Freedom and Reconstruction (ULC) at their 3rd Annual Conference in St. Paul, Minnesota late last month.

Vanlang Khamsouk, president of the U.S.-based Alliance for Democracy in Laos, called for the Lao government to release political prisoners, including those who have disappeared and are presumed to have vanished in government hands.

“In this latest case, they arrested Ms. Mouay. Today I stand together with all Lao people with concern over Ms. Mouay’s fate,” Vanlang Khamsouk, president of the U.S.-based Alliance for Democracy in Laos, told the conference.

“[We] exercise our rights as Lao-Americans and call for the government to release people who have been [wrongly] arrested or forcibly disappeared. [They should] be returned to their families,” he added.

“Forty-four years under the dictatorial regime of the Lao People’s Revolutionary Party has not brought prosperity to Laos, our homeland,” the president said.

“They oppress and suppress all ethnic groups in Laos, impoverishing us, and they are the reason the country lags behind with [other] undeveloped countries.

Fight for democracy in Laos

The conference was attended by more than 800 people, including Crown Prince Soulivong Savang, who claims to be Laos’ rightful monarch and leads the Paris-based Fa Ngum Association as head of the [now deposed] Lao royal family.

The prince delivered the opening address at the conference.

“I’d like to talk about our fight, in which our main goal is to restore freedom and democracy to our country,” he said.

“We have been fighting for over 40 years and we have not yet reached our goal. It’s been a very long fight but we still have not given up,” he added.

The prince urged the attendees to come together in a united front to accomplish their shared goals.

At the conference, the groups agreed to change the name of the ULC to the Lao Coalition for Peace and Democracy (LCPD) in order to better represent the mission and to consolidate all of the structures, policies and by-laws of the member organizations, with the purpose of solidifying the unity of overseas Lao.

According to U.S. immigration statistics, there were more than 260,000 people of Lao origin in the United States in 2016, with significant populations in California and Minnesota. The major flow of immigrants came in the 1970s and 1980s in response to the 1975 communist takeover of the country.

Lao royal family must engage more in fight for freedon and democracy in Laos. Lao people in and outside the country must join hands to stand up to the Lao blood-sucking regime.

We are fighting so hard for justice non stop And Where was he in the last 40 years
Why now Look like Fence sitter to me
Do we have to listen to him now before saying anything now Is he a new boss?