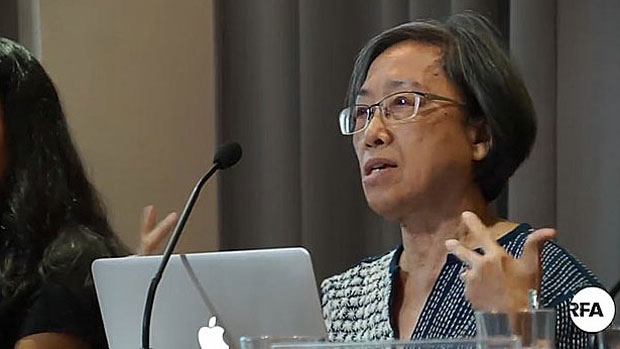 The wife of disappeared Lao rural development activist Sombath Somphone called on the government of Laos on Thursday to answer questions surrounding the fate of her husband, who vanished five years ago at a police checkpoint outside the Lao capital Vientiane.

Joined by a Malaysian parliamentarian and by rights group members at a press conference held in Bangkok, Ng Shui Meng said that repeated promises made by Lao authorities to investigate Sombath’s disappearance have led nowhere.

“I am asking the Lao government again to tell the truth,” Ng, a resident of Singapore, said a week before the fifth anniversary of Sombath’s forced disappearance, apparently at the hands of state-linked figures.

“I need to know whether he is alive or dead,” Ng said.

“It has been five years now since Sombath disappeared. I need answers, and I will keep asking these same questions until I get them,” she said.

Video footage shows Sombath’s Jeep being stopped at a police checkpoint on the evening of Dec. 15, 2012. In the video, Sombath is shown being forced into a white truck and taken away a short time after a man dressed in white arrives and drives off in his Jeep.

Though police later promised to investigate, Lao authorities soon backtracked, saying they could not confirm the identity of the man shown in the video and refusing offers of outside expert help to analyze the footage.

Before his abduction, Sombath had challenged massive land deals negotiated by the government that had left thousands of rural Lao villagers homeless with little paid in compensation. The deals had sparked rare popular protests in Laos, where political speech is tightly controlled.

Sombath’s decades of work on behalf of farmers and sustainable agricultural practices helped him win the U.N.’s Human Resource Development Award for empowering the rural poor in Laos, and later the prestigious Ramon Magsaysay Award for Community Leadership.

Also speaking in Bangkok, former Swiss aid agency Helvetas director Sophie Gindroz told the conference that Sombath is not the only person to have disappeared in Laos after drawing authorities’ attention.

Others have vanished too, with many likely never to be seen again, said Gindroz, who was expelled from Laos in December 2012 after making statements critical of the Lao government.

I don't think LPDR will ever answer SombathSomphone wife's questions, and Sombath might not alive.

Keep asking the same question over and over again the Lao government will make you disappear too.

Is is that a threat to Mrs Sombath Somphone?