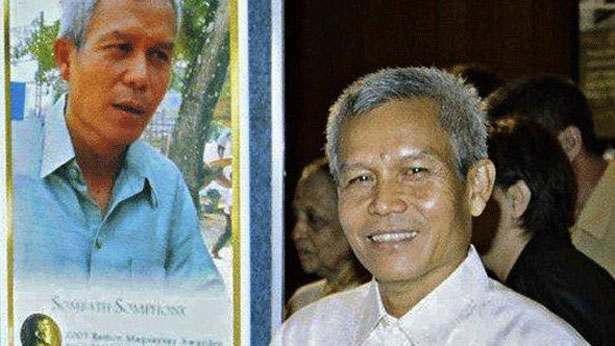 A 2005 photo of Sombath Somphone in the Philippines.
AFP

Students, NGO officials, and diplomats held a remembrance service in Vientiane on Friday to commemorate a prominent civil society leader who vanished five years ago at a police checkpoint outside the Lao capital, while rights groups worldwide demanded to know his whereabouts.

The group gathered at the Participatory Development Training Center (PADETC) to mark the fifth anniversary of the disappearance of Sombath Somphone, who founded the nonprofit center devoted to sustainable social, economic, and environmental development.

Sombath’s widow, Ng Shui Meng, who has repeatedly called on the Lao government to answer questions surrounding the fate of her husband, thanked the center for continuing to believe in Sombath's vision and ideas.

Sombath went missing on Dec. 15, 2012, when police stopped him in his vehicle at a checkpoint on the outskirts of Vientiane. He was then transferred to another vehicle, according to police surveillance video, and has not been heard from again.

Rights groups suspect that government-linked organizations or criminal elements may have abducted Sombath, who received the 2005 Ramon Magsaysay Award for Community Leadership — Asia’s equivalent of the Nobel Prize — for his work in the fields of education and development.

Though authorities have denied any responsibility, Sombath’s abduction is widely acknowledged to be an enforced disappearance — the arrest or detention of an individual by state officials or their agents followed by a refusal to disclose the fate or whereabouts of the person or a refusal to acknowledge the deprivation of their liberty.

Lao officials have yet to state a reason for his disappearance or make any progress in the case, which has drawn criticism from European and U.S. development partners and aid donors, as well as attention from the United Nations.

“Five years on, Sombath’s ‘disappearance’ highlights the glaring problems of enforced disappearance, widespread rights violations, and the culture of impunity protecting government officials in Laos,” said Phil Robertson, Deputy Asia director of Human Rights Watch (HRW), in a statement issued on Friday. “The government needs to end its cover-up and explain what happened to Sombath.”

“Sombath’s ‘disappearance’ will be a stain on the Lao government’s reputation until his fate is explained and those responsible are fairly prosecuted and punished,” he said. “Donor governments, U.N. agencies, and multilateral organizations should keep raising concerns with Lao leaders until there are credible answers about Sombath’s fate.”

Andrea Gioretta, head of the Asia desk Paris-based International Federation for Human Rights, said that the Lao government has prevented people from speaking out about Sombath’s disappearance.

“The Lao government intentionally suppresses the Lao people from speaking out about Sombath Somphone,” he said at the ceremony in Vientiane.

Anne-Sophie Gindroz, a the country director for Laos for the Swiss aid agency Helvetas, who was expelled from the country by authorities in December 2012 after making statements critical of the government, told RFA earlier that the Lao government eliminated Sombath on purpose to suppress dissidents and spread fear among the Lao people.

“And it has been very effective,” she said. “As a result, Laotians have been more afraid and silent. Even though they are so unhappy with the government, they always keep quiet.”

RFA’s Bangkok bureau was unable to reach the Lao Ministry of Foreign Affairs this week to inquire about the status of the case.

A high-ranking police officer responsible for Sombath’s case at the Ministry of Public Security would not answer RFA's questions as to whether authorities still are investigating the matter.

When another RFA reporter called him at a different time, he said, “Never ask questions about Sombath Somphone.”

Also on Friday, more than 120 rights organizations worldwide, including Amnesty International, ASEAN Parliamentarians for Human Rights (APHR), and Lao Movement for Human Rights, called on the Lao government for information about Sombath’s whereabouts.

“On the fifth anniversary of the enforced disappearance of Lao civil society leader Sombath Somphone, we, the undersigned organizations, express outrage at the Lao government’s failure to independently, impartially, effectively, and transparently investigate Sombath’s disappearance, reveal his whereabouts, and return him to his family,” said a statement issued by the groups.

“The Lao government’s continued silence and obfuscation of the facts around Sombath’s enforced disappearance have subjected his family to five years of fear and uncertainty over his fate and whereabouts, which remain unknown to this day.” 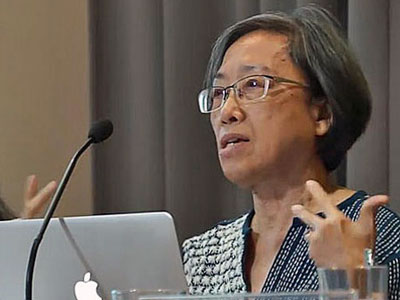 At a press conference on Dec. 7 in Bangkok to mark the fifth anniversary of Sombath’s disappearance, Ng called on the Lao government to reveal the truth about her husband’s fate.

“We still need an answer from the Lao government about where Sombath is [and] whether he is still alive or dead, and we will keep asking this question until we get the answer,” Ng told RFA’s Lao Service at the event.

She also said that witnesses she declined to name recently came forward to say they had spotted Sombath at a police holding facility in Vientiane a few hours after he was stopped at the police checkpoint, and that his jeep was seen in the facility’s parking lot the same evening.

“This newly public information demonstrates the inadequacy of the official investigations into Sombath’s disappearance and the contours of a cover-up by Lao authorities,” HRW said in the statement it issued on Friday, referring to Ng’s comment about information from the witnesses.

“The authorities have repeatedly dismissed concerns raised by Sombath’s family, foreign governments, and human rights groups about whether the government investigation was serious,” HRW said.

Robertson said at the press conference in Bangkok that none of the representatives from 12 NGOs working in Laos who attended the event spoke openly about Sombath.

At the same news conference, Malaysian lawmaker and APHR chairman Charles Santiago said there is no doubt in his mind that Sombath was forcibly disappeared.

“[I]t’s clear to me after looking a hundred times at the video that was shown earlier that it is the state’s action of an enforced disappearance,” he said. “It’s obvious that the state is involved.”

Laos has signed but not ratified the International Convention for the Protection of All Persons from Enforced Disappearance, an international human rights instrument of the U.N. intended to prevent such disappearances.

Reported and translated by RFA’s Lao Service. Written in English by Roseanne Gerin.

That hurts. Sombath helped contributing to the slow development of Laos but by kidnapping him for no reason just because he was involved in a controversial AEPF event, what's the point?

Fear is everywhere in the country and all those smiles, sunshines and rainbows are merely a cover up. Curse you Lao government.