US Asks For Meeting with Tibet’s Detained Panchen Lama 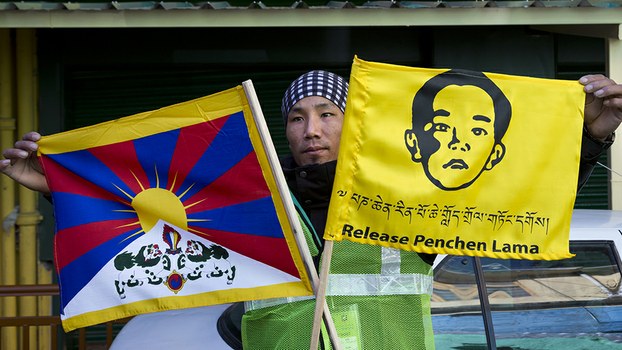 A member of the Tibetan Youth Congress poses for a photograph before embarking on a motorcycle rally to create awareness about the Panchen Lama in Dharmsala, India, April 23, 2019.

The U.S. government would like to meet in person with Tibet’s Panchen Lama, who vanished into Chinese custody as a young boy 25 years ago this week and has not been heard from since, a State Department spokesman told RFA on Thursday.

“This Administration would welcome the opportunity to meet with the Panchen Lama in person,” the spokesman said, noting that only Beijing so far knows the answers to questions asked around the world about the circumstances of the high-ranking religious leader’s detention since 1995.

“We urge the PRC government to release immediately the details of the Panchen Lama’s whereabouts, which have remained unknown since his forced disappearance by Chinese authorities in 1995,” the spokesman said.

The recognition by exiled Tibetan spiritual leader the Dalai Lama angered Chinese authorities, who three days later took the boy and his family into custody and then installed another boy, Gyaincain Norbu, as their own candidate in his place.

Tibetan tradition holds that senior Buddhist monks and other respected religious leaders are reincarnated in the body of a child after they die.

The Panchen Lama installed by Beijing meanwhile remains unpopular with Tibetans both in exile and at home.

Thursday’s U.S. statement came at the end of a week of exchanges between the U.S. and China, with U.S. Secretary of State Michael Pompeo on May 18 calling on China to make public the Panchen Lama’s whereabouts, and a spokesperson for China’s Foreign Ministry saying next day that the now 31-year-old Panchen is a college graduate who “now has a job” and wishes with his family not to be disturbed in their “normal life.”

“The Panchen Lama is one of the most important figures in Tibetan Buddhism with spiritual authority second only to the Dalai Lama,” the State Department said on Thursday.

“We again urge the PRC government to cease interfering in the right of the Tibetans to select, educate, and venerate their own religious leaders. All faith communities share this right, and it must be respected,” the State Department said.