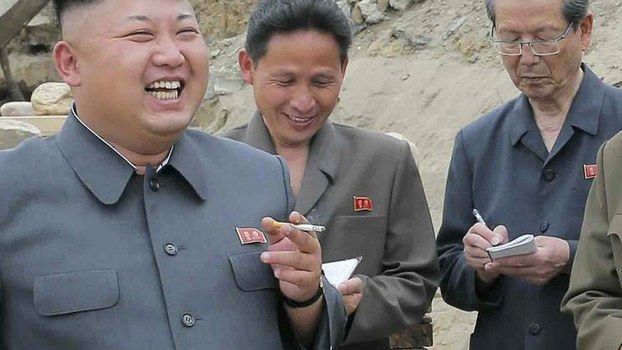 Citizens of North Korea are rolling their eyes at a recently passed anti-tobacco law, which punishes the people for smoking in public even though it is well known that the country’s leader Kim Jong Un is a heavy smoker, sources in the country told RFA.

The passage of the “tobacco-prohibition law” Wednesday by the Supreme People’s Assembly made headlines across the world. A report in the New York Times noted that state media shows images of Kim going about his duties with cigarette in hand. It questioned how the assembly could pass such a law when its most public figure is likely to publicly break it often.

Residents inside the isolated country are asking the same question. A resident of North Pyongan province, in the country’s northwest, told RFA that after hearing about the law on television news, many were “dumbfounded.”

“They say that Kim Jong Un, a known smoker, should be subject to smoking control first,” said the source, who requested anonymity for security reasons.

“According to the tobacco-prohibition law, which is now national policy, the key point is to protect the lives and health of the people… But the residents are booing. They say that the Highest Dignity who even chain smoked while visiting an orphanage in front of the children is the one who violated the law first,” the source said, using an honorific term to refer to Kim.

The source said that many residents, some of whom are war veterans, pointed out that in documentary footage, Kim is often seen smoking in front of senior officials who are older than him, in a culture where smoking in front of elders would otherwise be seen as a sign of disrespect.

Another source, a resident of South Hamgyong province, on the country’s east coast, told RFA that residents there feared the law could be used to arbitrarily punish people.

“Residents are criticizing the tobacco-prohibition law, saying that smoking the wrong area could lead to death as a political criminal,” said the second source, who requested anonymity to speak freely.

The new law is not the first on the books that aimed to curb smoking as a matter of public health—the government in 2005 passed the Tobacco Control Law, even though trading companies owned by the ruling Korean Workers’ Party, the government, or the military continued to produce and sell cigarettes to raise money.

Smoking in North Korea is very common among the country’s youth.

“The tobacco culture of society itself, especially among teenagers is serious,” Kim Joo-il, a North Korean refugee who settled in the United Kingdom, told RFA Thursday.

“Since middle and high school students smoke a lot, it seems that North Korea needed to do something about it,” he said.

Kee Park, a professor at Harvard University and a member of the Korean-American Medical Association (KAMA) told RFA, “This legislation seems to be a move to implement the Framework Convention on Tobacco Control [FCTC], an international agreement established by the World Health Organization [WHO].”

Signatories to the FCTC are required to enact evidence-based measures to reduce tobacco use and exposure to tobacco smoke.

“Chairman Kim seems to still be smoking. The rate of smoking among residents, meanwhile, seems to have decreased a lot since I went to North Korea 13 years ago,” said Park.