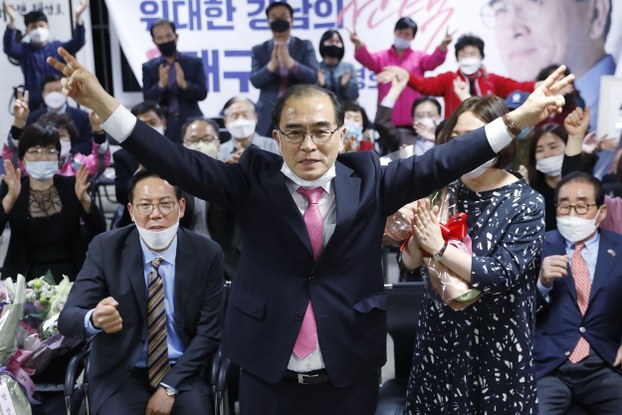 Thae Yong Ho, center, former North Korean diplomat, who defected to South Korea in 2016 and a candidate of the main opposition United Future Party, reacts after he was certain to secure victory in the parliamentary election in Seoul, South Korea, Thursday, April 16, 2020.

President Moon Jae-in’s ruling party swept South Korea’s April 15 National Assembly elections, but it is the two newly elected lawmakers from the opposition who were once North Korean citizens that are creating a hopeful buzz among fellow exiles from the reclusive country.

Thae Yong-ho, North Korea’s former deputy ambassador to the U.K., who defected to the South with his family in 2016, won his election as a member of the opposition United Future Party, and will be the first such defector to represent a constituency in the assembly.

He will be joined by Ji Seong-ho, who fled North Korea in 2006 and after arriving in South Korea, formed an advocacy group called Now Action & Unity for Human Rights (NAUH). Ji also won an assembly seat in a satellite party aligned with the opposition.

As the two former North Koreans make plans to leave their marks on South Korea’s political landscape, their accomplishments may have greater effect on those still connected to Pyongyang, as news of Thae’s election is spreading rapidly among North Korean expats and exiles, sources say.

“I saw on the internet that [Thae] was elected to the National Assembly,” a North Korean trade official, stationed in Dalian, China, who requested anonymity to speak freely, told RFA’s Korean Service on Sunday.

“This news is a hot topic for trade officials,” the source added.

Most striking to the trade officials is that someone who was once so loyal to North Korea could simply move to the South and become successful in such a short time.

“Other trade officials have been saying that they are surprised to see Thae [win his election] only a few years after defecting to South Korea,” said the source.

“They quip that he is doing much better now than when he was a diplomat for North Korea,” the source added.

Thae’s success is causing some of the trade officials to consider defecting themselves, according to the source.

“Trade officials [like me], who have been stationed in China for many years, earn our salaries in foreign currency, and make loyalty offerings to the country. But we are always anxious to know when we will be summoned home and purged,” the source said.

“Although many of us want to defect, we are hesitant because of the safety of our family members who remain inside North Korea,” the source added.

“But honestly, the fact that Thae Yong-ho has become successful in settling down in South Korea, it’s opening our eyes.”

Another source, a trade worker stationed in Donggang, China, who requested anonymity, contrasted Thae’s new position in the South Korean government with that of the equivalent position in North Korea’s.

“A member of South Korea’s National Assembly can make their voices heard to the president, and make laws according to the people’s demands. This is very much unlike a deputy of the Supreme People’s Assembly in North Korea,” the second source told RFA on the same day.

“They are like scarecrows who act like yes men. Senior officials in Pyongyang will be so shocked when they hear that Thae Yong-ho has become a lawmaker in the South,” the second source said.

But for now, Thae is making waves among Pyongyang’s officials stationed abroad.

“Trade officials in China are paying keen attention to the fact that Thae was elected, and representing Gangnam to boot. Gangnam in Seoul is like the Central district of Pyongyang,” said the second source, alluding to the area of the North Korean capital where the wealthy and elites live.

“[The trade officials] have high expectations and are watching him curiously, because [Gangnam] is a rich, high-status area,” the second source said.

But the second source predicted that North Korea’s government will move quickly to discourage the spread of the news of Thae’s success in the South.

“The authorities will tighten their ideological control efforts while thoroughly monitoring the movements of senior officials in fear that [those] who hear the [news] will envy Thae Yong-ho or show signs of admiring South Korean society.”

Hope for the People

Several members of the North Korean escapee community in South Korea told RFA that the successes of Thae and Ji would give hope people in the North, possibly encouraging them to consider leaving the authoritarian country themselves.

“North Koreans [who hear about Thae and Ji] must now be fully recognizing that South Korea is a society where one can even become a member of the National Assembly if he or she works hard,” said Seo.

“Middle class officials must be in shock,” he added.

Paek Yosep, the secretary general of the Coalition for Change in North Korea, told RFA, “Former minister Thae settled in South Korea not so long ago.”

“It would be a great message to North Korea that ordinary [South Koreans] gave votes to such a person, especially among the North Korean elites,” Paek said.

“They will have hope that they too can be recognized [as fellow citizens] by South Koreans if they go to the South,” he added.

Lee Woong-gil, who heads the Saeteomin Lounge, an organization that assists recent arrivals in the South who escaped from the North, told RFA that it is likely that news of Ji’s win will likely resonate in Ji’s hometown of Hoeryong, North Hamgyong province.

“If North Koreans learn that everyone in South Korea is given an equal opportunity, many people will be shaken, and this will lead to a change in North Korea,” said Lee.

In colloquial speech, both Thae and Ji are referred to by a catch-all term that can be translated into English as “defector,” but human rights groups outside Korea would call Thae a defector and Ji a refugee due to the circumstances of their respective escapes.