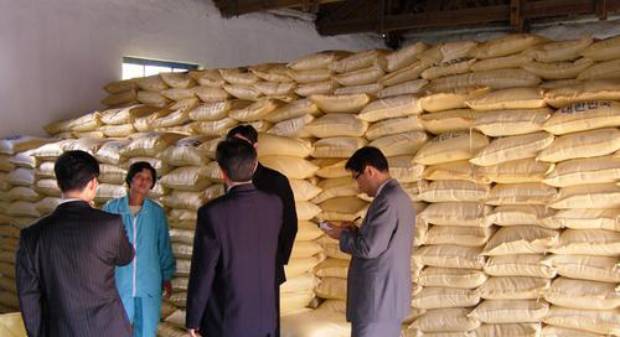 This file photo shows rice piled up to be distributed to residents at a food supply center in Kaesong, North Korea.
Yonhap News

North Korea is encouraging people to conserve food, and punishing those who waste it, as part of a national campaign to solve shortages made worse by recent floods, sources in the country told RFA.

In what it has labeled a “food-saving struggle,” the government is trying to make up for a grain deficiency caused by severe flooding over the summer, which included three consecutive typhoons in August in September that damaged farmland and destroyed crops.

Directives from the Central Committee of the Korean Workers’ Party say that the protection of the socialist economy depends on citizens’ ability to conserve, and authorities are cracking down on people who secretly brew alcohol from grains, threatening “strong legal punishment.”

“At the beginning of this month, the Central Committee ordered residents to actively participate in solving our food crisis this year as part of a food-saving struggle,” an official from North Hamgyong province, in the country’s northeast told RFA’s Korean Service Monday.

“The order emphasized that the struggle not only solves the problem of how we will eat, it is a matter of protecting the socialist system. It also warned that authorities will step up crackdowns and punishment for any actions related to food waste,” said the source, who requested anonymity to speak freely.

The source said that the struggle is a countermeasure to deal with significant decreases in grain production. North Korea does not have the capacity to satisfy its own grain demand in most years, but the deficit was made worse by the floods this summer.

On top of this, the coronavirus caused North Korea and China to close their border and suspend all trade in January, meaning food imports are not a viable solution to the crisis.

The directive will cut into the festivities during some of North Korea’s most important year-end holidays and occasions, where elaborate table settings of many dishes are customary.

“The Central Committee also instructed us not to set the ceremonial table with foods made from grains. They have ordered a ban on rice cakes and bread, suggesting we use only fruits and vegetables. They said that simply serving noodles as a meal to attending guests is an important way to save food,” the source said.

“The Central Committee is also warning of strong legal punishment for those who waste food by secretly brewing alcohol from grains and drinking socially. There’s even an order to crack down on covert alcohol production, and an inspection team has been formed and are already operating in some residential areas,” said the source.

The source also said that as part of the order, officials would not be able to leverage their status to break the rules, and they should set an example for the people.

“They warned that if officials are caught wasting food, they will be subject to criticism and severely punished.”

Another source, from neighboring Ryanggang province, confirmed to RFA the same day that residents had received the order there as well.

“Farmers who have to sell grain to purchase other things they need have been greatly inconvenienced because rural residents are now prohibited from selling grain on the market,” said the second source who requested anonymity for security reasons.

“Inspectors are stationed on roads just outside the downtown areas to check passing cars, carts and even luggage carried on people’s backs, to ensure people don’t transport grain. Food prices are rising in the market as grains are forbidden, and this threatens residents’ livelihoods,” the second source said.

The second source said that the government should bring in food aid from the international community in times of shortage, but the authorities are instead forcing people to ration what they have.

“People are angry, they say that controlling food distribution will make everyone’s difficult situation even worse.”

The South Korean Ministry of Unification in May estimated that North Korea would be short of about 860,000 tons short of the 5.5 million needed to feed its population.

That estimate was however made before the late-summer flooding and typhoons, in which an estimated 200,000 additional tons were lost, Kwon Tae-jin, a South Korean expert specializing in North Korean agriculture, told RFA.

North Korea has in the past urged conservation as a solution to food crises, with disastrous effects.

Prior to Soviet Union’s collapse in 1991, North Korea was able to produce enough food for its population by using vast amounts of chemical fertilizer made possible through imports of cheap fuel.

But fertilizer production plummeted following the USSR’s collapse in 1991 and the government anticipating food shortages, started its now infamous “Let’s eat only two meals a day” campaign that year.

But no amount of conservation would prepare North Korea for the famine that between 1994 and 1998 killed millions—as much as 10 percent of the country’s population by some estimates.