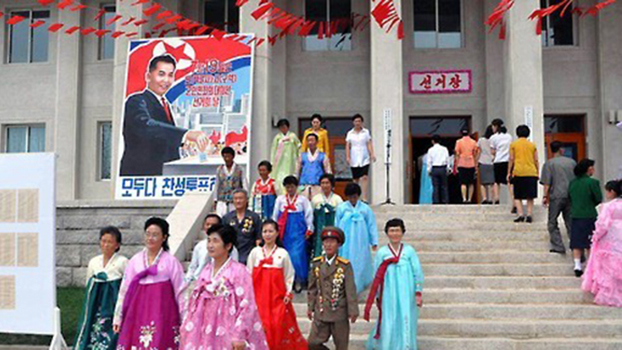 Many citizens in North Korea wear traditional clothing or military uniforms to the polls, highlighting the patriotic significance of elections.
Yonhap News

North Korean citizens are expressing their ire over the one party nation’s elections on Sunday, saying that the result is already determined and authorities are watching who they vote for.

The elections, scheduled for March 10, are to choose deputies for the 14th Supreme People’s Assembly, the country’s rubber stamp parliament, but residents are saying that their participation amounts to no more than a political sideshow, as they cannot truly exercise their political will.

“People are following orders from the Central Committee and fussing over preparations for the election,” said a source from Chongjin, North Hamgyong province in an interview with RFA’s Korean Service.

“[The committee] is trying to create a [patriotic] atmosphere for the election with the slogan ‘Let’s make our revolutionary sovereignty rock-solid!” said the source.

The authorities are also enlisting local manpower to make election time a spectacle.

“Workers from companies all over the province are mobilized for election rallies every day, wearing their event costumes. Students with drums, flowers and election slogans sing and march to [get the people] excited for the election,” the source said.

According to the source, propaganda from the committee is saying that the people should welcome the election as proud citizens of the republic, even saying that North Korea is the only country for people with dignity.

“But people complain that there is no true sovereignty for the people, and that the election is a farce, since they are being coerced into voting 100 percent for the candidate nominated by the [Korean Workers’] Party,” the source said.

Preparations for the election are taking priority over citizens’ normal routines, causing lost income and hardship for some.

“People who [have to go out and] make a living every day are facing difficulty because [they have to miss work] to promote the election. They can’t go to work, say, in the local market, because they have to go out campaigning,” said the source, adding, “It’s causing people to really start griping about this election.”

Another source, from South Hamgyong province, expressed a similar mood of resentment in that region.

“Every neighborhood is [letting on] that they are excited about the election, because it’s only a few days away,” the source said.

“But in reality most of the people are not happy because they are being coerced into voting for the candidate that’s been chosen by the Party,” said the source, referring to the Workers’ Party. The party, chaired by leader Kim Jong Un, is the founding and sole governing political party of North Korea.

Even if the public had the option not to vote, the results of the election would be the same, as there is only one candidate on the ballot, according to the source.

“We can find out who the lone candidate is on the day of the election. We get to see his face, name and what he does for a living on a bulletin board at the voting center,” said the source.

“People have to vote for this candidate 100 percent, and they are sick of political games that the Party is playing,” the source said.

Some democratic countries, such as Australia also have a mandatory voting system, but citizens who don’t want to vote have the option of submitting an empty ballot. This option is not available in North Korea.

“We have to mark the ballot and put it in the ballot box while the election committee is watching,” said the source.

“[These kinds of] coercive elections ignore the opinions of the people so nobody really cares about the election or its results,” the source said.

Even with citizens rolling their eyes at the ballot, the authorities still play up the importance of participating in the election.

“[They say] our election system is the most superior system [in the world]. They say that in capitalist countries the elections are unfair and the results are fake,” the source said.

“But people know that what they are saying is propaganda and that our elections are nonsense.”