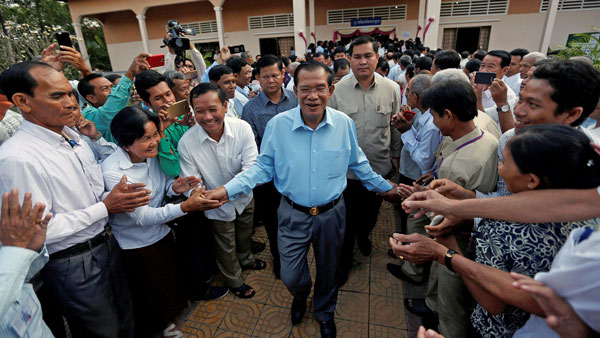 The U.S. Embassy in Phnom Penh marked the first anniversary Tuesday of national elections conducted under a ban of Cambodia’s main opposition party with a statement calling the vote “deeply flawed” and urging Hun Sen’s regime to “take tangible actions to restore democracy.”

In the July 2018 election, Hun Sen's ruling Cambodian People’s Party (CPP) won more than 75% of the vote and claimed all of the seats in Cambodia’s National Assembly. The international community and domestic rights groups widely regarded it as a sham election as the main opposition Cambodian National Rescue Party (CNRP) had been banned the previous year.

“That vote was neither free nor fair, and it failed to represent the will of the Cambodian people. The elections excluded the country’s principle opposition party and further eroded the country’s achievements in promoting political reconciliation and economic growth since the 1991 Paris Peace Accords,” the embassy said.

The statement on the embassy’s Facebook page criticized Cambodia’s Hun Sen led government, calling on it to ensure basic rights for citizens.

“We call on the government to take tangible actions to restore democracy, including dropping all charges against [CNRP President Kem Sokha, currently in de-facto house arrest] and other political prisoners, and ending the practice of using baseless, politically motived charges to harass its citizens. All in Cambodia should be able to exercise their rights to express their views freely and to assemble peacefully, and for citizens to take part in the conduct of public affairs,” the embassy concluded.

Government spokesman Phay Siphan wrote a response on his own Facebook page that implied the elections were legitimate and that the will of the people was served as laid out in the constitution.

The spokesman may also have been attempting to redirect some of the criticism on the legitimacy of elections back toward the U.S.

CNRP Acting President Sam Rainsy, currently living in exile in Paris, said that since the elections Hun Sen has made strategic decisions to enrich his own family or maintain his grip on power.

He was particularly critical of the regime giving too many concessions to investor from China, which has emerged as Hun Sen’s main backer as his crackdown on opposition politicians, civil society and the media have alienated the United States and Europe.

“He is riding a free horse. All the decisions he made are contrary to [Cambodia’s] national interest,” said Sam Rainsy in an interview with RFA’s Khmer Service Tuesday.

“People have been seeing [increased] Chinese presence and influence in Cambodia over the last few years. We can [see] what the negative impact of that is for villagers in Sihanoukville and Kosh Kong provinces,” he said.

“The Chinese influx led to land encroachment and confiscation and [the establishment of] other businesses just to serve Chinese interests. Cambodians are losing their national resources such as forests, mines, land and jobs. We are suffering,” said Sam Rainsy.

Cambodia is also putting itself risk by making arms deals with China, he added.

“Just like Pol Pot’s regime, Hun Sen is killing democracy and persecuting his own people. No other countries want to be associated with Hun Sen except China because China wants to occupy Cambodia and Hun Sen needs China to strengthen his power,” he said, referring to the Beijing-backed Khmer Rouge regime that killed millions of Cambodians during its 1975-79 rule.

“Hun Sen’s policies are a great risk to Cambodia. We are losing our independence and Hun Sen is becoming more dictatorial as he relies on China and its military,” Sam Rainsy said.

“He is buying weapons from China to kill his own people because Cambodia is not at war with other ASEAN countries,” he said. On Monday, Hun Sen said in a speech that he had spent $40 million to buy “tens of thousands of guns” from China.

Today, the UN has become a dangerous body of Humanity because it runs by gangster Russia, Iran, China ...And being manipulated by some its member was the perpetrator of genocide such as Vietnam, Hun Sen appointed man...Just look at the UN Convention 1948 definition of genocide to label genocide in Cambodia that does not fall within itself's definition. The Khmer Rouge kill its own people because of their political against Vietnam. The true genocide occurred in the Central Highlands of Vietnam where Dega people is a kind of a group of people that fit neatly with the UN Convention on punishment and prevention of crimes of genocide. For the reason, Vietnam invasion Cambodia in December 1979 to diverge the world's opinion. Hun Sen is still in power because the Human house is leaking from the roof, it needs to be fixed by humankind.

Saddam Hun Sen is a Chinese Puppet and a danger to democraties. Plus he granted a maritime base to Chinese warships in Sihanoukville. It's another step forward to get control of all south " China " sea by commie Chinese.

It was a waste of times and money for ONE party election. Please Prime Minister change the course of economy. From 1953 to 2019 what and where is DEMOCRACY?