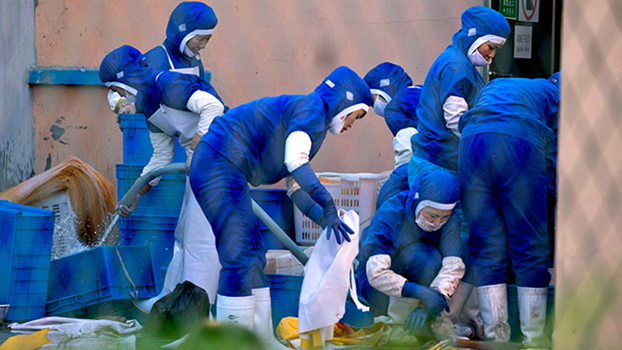 Sanctions aimed at depriving Pyongyang of resources that could be used in its nuclear and missile programs mandate that all overseas North Korean workers return home by the end of this year.

Pyongyang’s overtime push is an attempt to squeeze every last penny they can out of their overseas workers before the well of foreign cash their work provides dries up.

A Chinese source, a quality control specialist at a fish processing plant in Donggang, China, told RFA’s Korean Service Sunday that North Koreans there have been working grueling hours since last month.

“North Korean workers take on an extra four or five hours after eating dinner at 6 p.m. and they don’t go to their rooms until 11,” said the source.

The source said that the North Koreans were not working overtime on the company’s orders.

“The North Korean supervisor asked the company if they could work overtime for extra pay. All the North Korean workers need to return home by the end of the year, but they are really driven to earn as much foreign cash as they can before their return,” said the source.

But the source also revealed that the workers themselves aren’t’ seeing the fruits of their extra work.

“All the extra pay they are earning is actually given in a lump sum of Chinese yuan to the supervisor at the end of the month,” the source said.

“For all their toiling for extended hours into the wee hours of the night, they are not getting paid at all,” the source said.

The source noted that most of the workers are young and are also trading away the best years of their youth.

“They eat lunch and dinner at the work site, so they can immediately get back to work without any break. It is so sad to see young girls struggling to work like the men, processing and packing frozen fish well into the night with no complaints,” said the source.

Another source in Dandong, China said that North Koreans there were already in violation of sanctions.

“There are more than 10 fish processing companies in Dandong that employ North Koreans. Most of them are in China on short-term [30-day] visas, because they are not allowed to get working visas in China due to sanctions from the U.N. Security Council,” the second source said.

The second source said that even after the deadline, North Korea will find a way to send workers to China.

“The North Korean authorities ordered all their workers in China to return home by the end of December. But in the new year, [they] will find a way to send their foreign currency-earning workers back by any means necessary,” said the second source.

According to a Forbes article published in July, there is an upper estimate of 80,000 North Korean laborers working in China.