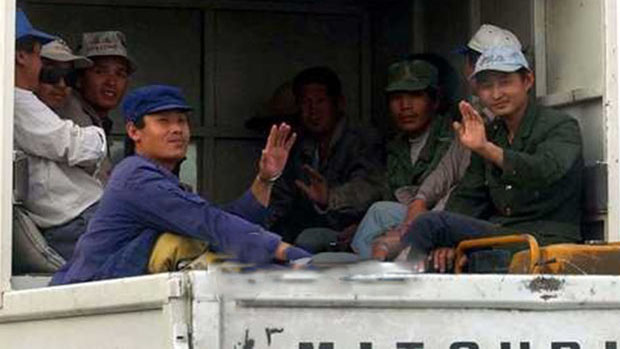 North Korean migrant workers and the companies that dispatch them overseas still have a strong presence in Africa, despite UN sanctions prohibiting the export of North Korean labor past the last month of 2019.

According to a former North Korean diplomat who defected and is now applying for refugee status in the United Kingdom, Pyongyang has many allies in Africa and has made strategic alliances with several African nations, so they are ignoring the sanctions, which are meant to deprive the isolated country of cash and resources that could be funneled into its nuclear program.

“There are many African countries that are close to North Korea,” the ex-diplomat, identified only by his surname Kim, told RFA’s Korean Service Tuesday.

Kim said that most African countries have long-standing alliances with North Korea, many dating back to the Cold War era, and do not see the advantage of kicking North Korean workers out because they are highly skilled and they accept relatively low pay.

But Equatorial Guinea did not reveal a specific number for how many North Koreans were repatriated.

Angola meanwhile promised in 2016 to cut off all military and economic exchanges with North Korea and send back all workers, including military officers.

However, it is known that this promise has not been kept yet.

Tunisia, the only African country that submitted its final report on the repatriation of North Korean workers specified in Resolution 2397, pointed out in its report that most other African countries are ignoring UN sanctions against North Korea.

According to Kim, North Korean affiliates in Africa are all officially under Pyongyang’s prestigious Mansudae Art Studio, which commissions artistic works for propaganda. But North Korea’s External Construction Guidance Bureau, the Korean Workers’ Party’s Propaganda Department and the Ministry of People’s Armed Forces all send their affiliates as well, leading to a situation in which North Korean companies with a presence in Africa are all competing with each other to make money to prop up Kim Jong Un and his inner circle.

The Committee for Human Rights in North Korea (HRNK) told RFA that the international community should pay attention to the North Korean migrant situation, especially to the human rights of the workers, because those officially dispatched by Pyongyang are deprived of most of their earnings and live and work in squalid conditions.

“Despite the coronavirus crisis, North Korean workers are risking their lives to earn foreign currency for the regime,” he added.

A Washington-based source familiar with Africa’s economy, who requested anonymity on fear of reprisal, told RFA that infrastructure and construction work under a long-term development plan is underway.

According to the source, more than 2,000 North Korean workers have been dispatched to work in pro-North Korean developing countries with poor medical systems.

Data published by the website “North Korea in the World,” which provides information regarding North Korea’s external diplomatic and economic relations, the total number of North Korean workers dispatched to other countries, prior to the December 2019 repatriation deadline, was about 100,000 to 120,000.

Among African countries, Angola had the most North Korean workers with about 1,000. Nigeria, Algeria and Equatorial Guniea had about 200 each and Ethiopia is believed to have 100, but the current status of North Koreans in these countries is unknown.

An RFA reporter visiting Tanzania in 2016 was able to identify about 100 North Korean medical staff that had been dispatched there.

In its final implementation report on sanctions prohibiting the export of North Korean labor, submitted to the UN Security Council on the March 19, the U.S. stressed that there are no North Korean nationals who have received valid labor permits in the U.S. from December 23, 2018 to December 22, 2019, and that the US is complying with sanctions.

The report, released on April 3, also calls for the repatriation of North Korean workers from other UN member states, saying the U.S. will continue to implement all the UN Security Council’s resolutions related to North Korea.

The UN Security Council’s North Korea Sanctions Committee did not answer questions from RFA about its position on the remaining North Korean workers in Africa as of Thursday afternoon.