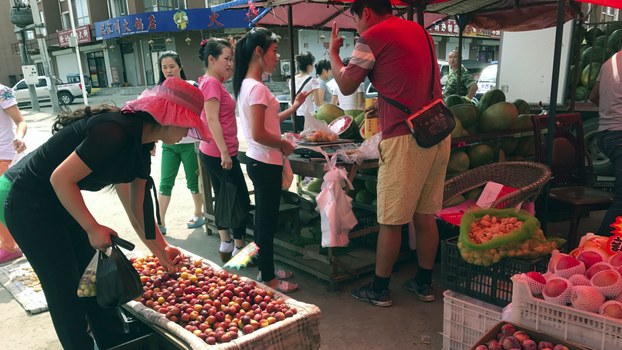 North Korean women from the Hong Chao Zhi Yi garment factory ask for the price of fruit at a street market in the city of Hunchun, in China's Jilin province, Sept. 2, 2017.

North Korean authorities have dispatched more security agents to China in order to boost control and monitoring of North Korean workers around the Lunar New Year holiday, with the goal of preventing the erosion of the workers’ loyalty and decreasing the likelihood of defections, RFA has learned.

“Up until now, one security agent controlled and supervised multiple work sites in cases where there were fewer than 100 workers,” a source from the Chinese border city of Dandong told RFA’s Korean Service on Tuesday.

“But these days, security agents have been dispatched so that there is one at every work site, even for very a small-scale workplaces,” the source said.

“Every worker’s passport and river-crossing pass, including the manager’s, are also kept by the security agents,” said the source, referring to permits to enter China across the countries river border.

The surveillance move is very unpopular among many dispatched workers.

“[The] workers at the sites where the security agents had not been [regularly] stationed are saying their good days are gone, because when they weren’t being watched by agents, they could have time off on holidays at the discretion of the manager,” the source said, adding that the prospect of time off is not something that many expect anymore.

Remain on the premises

RFA reported shortly after the deadline passed that many North Koreans in China appeared to be ignoring the deadline entirely.

A South Korean businessperson who runs a sewing factory in nearby Donggang told RFA that North Korean employees are not even allowed to leave their workplaces anymore.

“There are about 50 North Korean women who work at a Chinese food-processing company across the street from our factory. I’ve often seen them going to the grocery store near the factory gate, but not anymore,” the second source said.

“I initially thought that they had all returned home to North Korea, but when I asked the owner of the grocery store, I learned that they are now not allowed to come out,” said the second source.

“A new security agent has been dispatched from North Korea and he arranged that a single staff member would go to purchase things that the workers need from the store,” the second source added.

The newly arrived overseers may not be popular with the Chinese companies that employ North Koreans either.

“North Korea asks the Chinese company to provide about 20,000 Chinese Yuan (U.S. $2900) a month for accommodation and living expenses for the new security agent,” the second source said.

“This is equivalent to the wages of about 10 workers, and sometimes this creates a dispute between the North Koreans and the Chinese company,” the source said.

Research institutes in Seoul, including the Korea Institute for National Unification and Sejong Institute, estimate North Korea’s overseas workers to be around 100,000, 80 percent of which are from neighboring China and Russia, with 50,000 and 30,000, respectively.