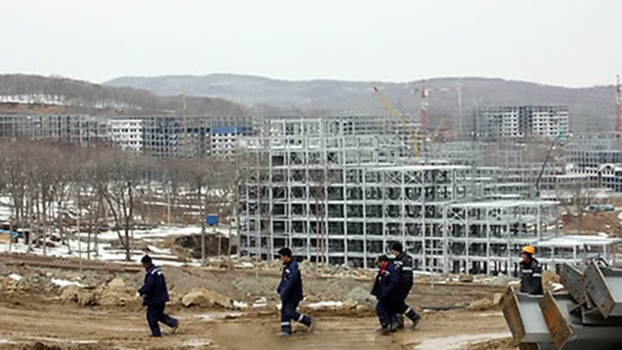 North Korean migrant workers in Vladivostok are leaving the city and heading for the suburbs to avoid crackdowns by Russian authorities.

Police in Vladivostok recently began scrutinizing the visas of North Korean workers, many of whom fraudulently entered the country on visas for educational purposes, sources say.

Given their precarious situation, fleeing to the suburbs gives the workers some degree of respite, but few North Koreans remain in the city.

“Nowadays it is hard to find North Korean workers in downtown Vladivostok,” said a Russian citizen of Korean descent from Vladivostok in an interview with RFA’s Korean Service.

“With the police cracking down on the workers, trying to find out if they are working illegally, if they are caught at work, they will be deported to North Korea, so that’s why they are spending their money [to go to the suburbs] to save themselves,” said the source.

But even with the constant police surveillance, the workers still in the city are doing what they can to avoid detection.

“[They] only work on the interiors of the buildings [if they are at] construction sites within the city so that they can’t be seen,” the source said.

“If their companies don’t have enough power to take care of the situation when they get caught, it all gets very complicated, so the companies just make them [work only inside buildings] so that they don’t draw attention,” the source added.

The source explained that many of the North Korean workers came and worked independently in the past, but now they prefer to work in larger work groups, because individually they are powerless against exploitation from unscrupulous employers.

“Russian companies are well aware that North Korean workers have to return home every quarter because they have temporary visas that limit their stay for three months,” the source said.

“Knowing that there is no guarantee that North Korean workers who return home will come back [to work], they delay paying wages under many different excuses,” the source said.

A second source, also from Vladivostok confirmed that seeing North Koreans in the city was a rarity these days.

“North Koreans have been a rare sight in the city since May. Because of their visas, they form groups and go work in the suburbs to avoid the police,” the second source said.

The second source explained that being organized in larger groups is a means to pressure their employees to pay on time.

“In Vladivostok, there were many disputes with local businesses because North Korean human resources companies did not receive their workers’ wages even after the construction was completed,” the second source said.

“Local business owners continue to delay paying for the workers’ wages, taking advantage of the weaknesses of North Korean workers since they have to return home every three months,” the second source said.

The second source explained that the combined weight of police crackdowns and their responsibilities to the North Korean regime is making the situation very difficult for the North Korean migrants.

“Currently, there are around 10,000 North Korean workers in Russia. Due to toughened sanctions on North Korea, North Korean workers have to work while hiding from the police. They are also unable to save money for themselves as they have to make offerings in foreign currency to the state,” the source said.

The export of North Korean labor was banned under a December 2017 UN Security Council unanimous vote to approve sanctions on North Korea aimed at depriving the Kim Jong Un regime of $500 million per year on the wages of an estimated 93,000 North Koreans working overseas.

The sanctions called for a freeze on new work permits, and would require host countries to send North Korean workers back by the end of 2019. Many countries in Europe and Africa reportedly complied early.

Russia voted to approve the 2017 U.N. sanctions, but CNN quoted a Moscow-based Asia-Pacific expert as saying that these were approved grudgingly, and only after they were made as “toothless” as possible.