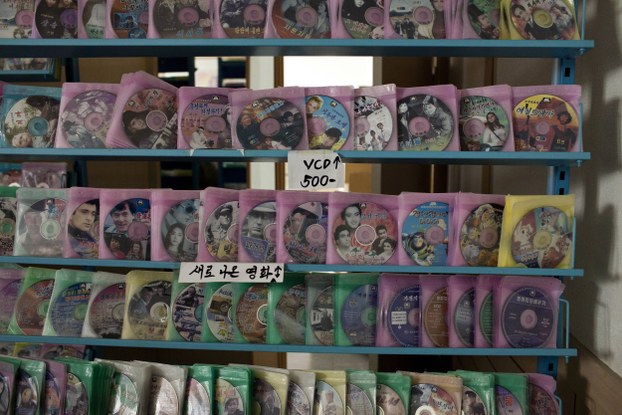 In this file photo, movie DVD and VCD disks are arranged on a shelf at a store in Pyongyang, North Korea.

Authorities in North Korea have arrested a group of seven teenagers in Yanggang province for watching South Korean movies, which are popular but banned in the North, sources in the country told RFA’s Korean Service.

The sources say that the raid of one of the teenagers’ homes is part of a larger crackdown on foreign media and publications ahead of the upcoming “elections” for provincial, municipal and county councils.

The consumption of foreign media is illegal in North Korea, but it is carried out in secret. Films, music and TV shows can be stored on small USB flash drives and smuggled across the border with China or through other entry points. The drives have even been put into packages sent to the North from the South by helium balloons by rights activists.

Access to foreign media is commonplace, and usually when citizens are caught in the act, they merely bribe the police to look the other way.

But in recent times, punishments have gotten harsher. RFA’s Korean Service in 2016 reported that the government executed several people for watching and distributing a South Korean TV show.

The seven teenagers could face time in a labor camp if convicted, sources say.

“[They] were caught a few days ago at the [home of one of the teenagers] in Kwanpyong village, Samsu county, by 109 Sangmu [officially known as Surveillance Bureau Group 109], a team specialized in crackdowns on illegal video watchers,” said a source from Yanggang province in an interview with RFA’s Korean Service on Thursday.

“They were using a small portable media player called a notel to watch a South Korean movie called ‘The Drug King.’”

The film was released in South Korea in December of last year and explores the real life story of a drug smuggler in the 1970s Busan underworld.

“From a few days ago, the Samsu country judicial authorities implemented measures to prevent impure elements from appearing on public bulletin boards with lists of members of parliament and election sites,” the source said.

“Tasked with detecting the distribution of illegal currency and illegal movie viewing, 109 Sangmu was on emergency duty [at that time],” said the source.

“They were patrolling the neighborhood with the latest [technology for] detecting [media viewer use] and they tracked the location and moved in to raid the site,” the source said.

The source said the reason the teens were using the notel instead of watching it on a TV was because it is easier to hide the evidence in the event of a raid.

“When 109 showed up [one of] the kids put the notel’s SD card in his mouth, but a computer technician from 109 was able to recover the notel’s usage history. It was then discovered that the South Korean movies they watched were not only ‘The Drug King,’ but also ‘1987: When the Day Comes’ and ‘The Outlaws’,” the source said.

“The seven students were taken to the 109 Sangmu office on suspicion of watching South Korean movies all night long,” the source said.

A second source, also from Yanggang province, said on the same day, “The kids who were taken away by 109 Sangmu while watching South Korean movies are between 15 and 17 years old. They are being interrogated about where they got the South Korean movie files from.”

“No food is provided to the students during questioning so they are being interrogated on an empty stomach,” said the second source.

“Their parents came to the 109 Sangmu office and begged them to forgive their bad parenting with tears in their eyes, but the judicial authorities say that those aged 14 or older must go to a correctional camp,” said the second source.

Naturally, the parents attempted to bribe their children out of trouble.

“The parents have acquaintances at 109 Sangmu and [tried to] bribe 1,000 Chinese yuan (almost $150) per student, but the judicial worker in charge of the case is raising the amount he wants in bribe, saying his team has five members and the assignment is from upper management,” the second source said.

“So, [the authorities said] they will let it slide if they can get more than 2,000 yuan (almost $300). The parents have no choice [but to accept], so they are looking for moneylenders to cover the remaining portion of the bribe money. This is causing them to resent the judicial authorities,” the second source said.