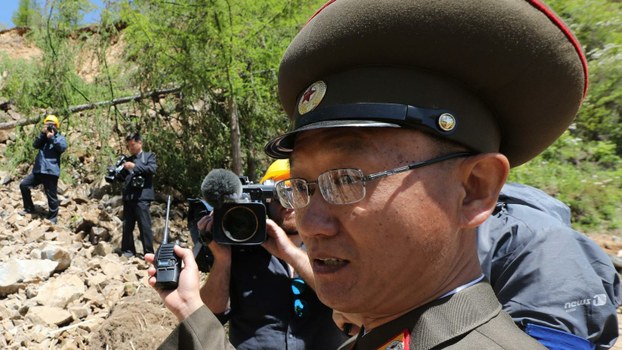 Elites in North Korea love South Korean eyeglasses smuggled into the country through China due to their purported higher quality over Chinese and North Korean counterparts. As North Korea’s wealthy are willing to pay, traders are going to great lengths to acquire prescription glasses made in the South, sources say.

Eyeglasses are just one of many South Korean products that North Koreans prefer over their own.

“South Korean products are popular among North Korean residents. This is nothing new. It’s been that way since a very long time ago,” a Chinese businessman of Korean descent from Shenyang told RFA’s Korean Service Monday.

“These days, most North Korean officials prefer South Korean goods so much that [it is likely that] they all own at least one or two South Korean-made items,” the source said.

The perceived superiority of South Korean products naturally extends to eyeglasses, according to the source.

South Korean eyeglasses have a reputation of being both high-quality and fairly inexpensive compared to most Western countries.

According to the website of the Seoul-based Korea Tourism Organization (KTO), South Korea is the third largest exporter of eyeglasses behind Japan and Italy. The KTO also says that South Korean glasses shops are “wildly popular” with visiting tourists because the glasses are not only cheap, they take very little time to make.

“It takes just 30 to 40 minutes to get eyeglasses after choosing frames and completing the eye exam, meaning that customers can walk out of the store wearing their new eyeglasses,” the KTO website said.

But where Western and Japanese tourists might buy glasses in South Korea to save money and time,  only the wealthy North Koreans can get their hands on them.

“Many North Korean officials and moneylenders have poor eyesight, and they know that South Korean-made glasses are good in quality compared to Chinese-made glasses, so they try to find ways to buy [them],” the source in Shenyang said, adding that recently, a friend requested help getting South Korean specs.

“Last week, a North Korean trade worker here in China, who I am close with, asked me if I could get glasses from South Korea using his eye exam results,” the source said.

“There are ophthalmology clinics in Pyongyang and other big cities in North Korea,” the source said, adding, “Eyeglass prescriptions are internationally accepted, so North Koreans can ask a South Korean optician to make glasses for them.”

South Korean glasses in some ways can be seen as a status symbol.

“Of course they can buy the glasses at Chinese opticians with their prescriptions, but the rich and powerful privileged class of North Koreans prefer South Korean glasses,” the source said.

“Because of this, the North Korean trade workers in China are also finding ways to buy South Korean eyeglasses. They hand over several copies of prescriptions they received from North Korea to a secret runner who can travel to and from South Korea to get the eyeglasses,” said the source.

“There are many [North Korean] expatriates who wear South Korean glasses. It is widely believed among the high-ranking North Korean officials that South Korean lenses are more precisely made than Chinese lenses,” the source said.

“Many of the North Korean officials insist on having South Korean-made glasses if they have astigmatism,” the second source said, adding that the Southern lenses are rarely sought out for being nearsighted or farsighted.

The source added that South Korean opticians were able to remotely provide frames suitable to the wearer’s face.

“If you can tell the South Korean optician your facial shape, age, gender, color and material preference, they will make great eyeglass frames and lenses to your taste. Customer satisfaction among North Korean [wearers] is very high.”

Inside North Korea, glasses are manufactured by the Pyongyang Glass Production Cooperative, 8.3 Consumer Goods production company, and several factories operating under the Second Economic Committee (munitions production). The lenses they produce are not made of plastic, but are thick, heavy glass lenses, which reportedly make eyeglasses more burdensome to wear.

Even so, glasses are seen as a luxury in North Korea, as most people who need glasses cannot easily get proper eye exams unless they are among the elite or otherwise wealthy.

What, you got missal that can reach wide and far and yet you can't make simple thing for your people to enjoy????