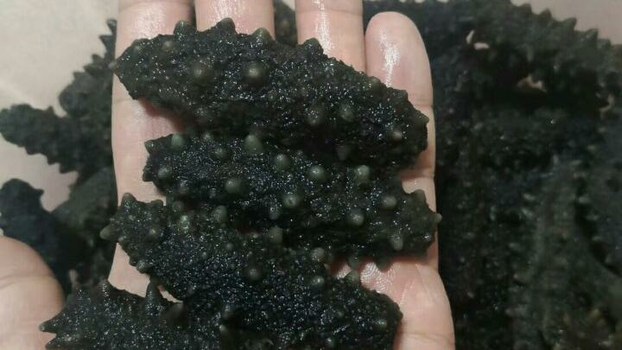 U.N. Security Council sanctions aimed at depriving North Korea of cash and resources that could be channeled into its nuclear and missile programs stipulate the export of processed seafood, but sources say the exquisite echinoderms are making their way across the Yalu anyway.

“At large dried seafood stores here in Dandong, it is easy to see the signs written in Korean that say ‘We buy and sell North Korean sea cucumbers.’ This proves that [the cucumbers] are actively traded after they are smuggled across the river,” said a trader from the Chinese city on the Sino-Korean border.

“[They] have to have been smuggled in because they are processed marine products that cannot be legally exported. The fact that they are being bought and sold openly in the market means that the Chinese authorities are not cracking down on items subject to sanctions against North Korea,” the source said.

Another source from Yanji in China’s Jilin province said that sea cucumbers are considered a delicacy in Chinese cuisine.

“When you go to the West market in Yanji or markets in Hunchun you will find many shops selling dried sea cucumbers from North Korea,” the second source said, adding, “they are a popular food ingredient for Chinese, because they are used in haute Chinese cuisine.”

“This year, North Korean dried sea cucumbers seem to be entering China in an unusually large amount and trading is brisk,” the second source said.

“It is because the Chinese authorities’ crackdown on smuggled North Korean fishery products is much looser this year compared to last year,” the second source said.

A third source, a resident of North Pyongan province pointed that sea cucumbers are always a cash cow for North Korea at this time of year.

“Dried sea cucumbers are considered a lucrative foreign currency maker that can be sold in China, so every fishery in the country is focusing on harvesting them in October.”

“Given the time to collect, dry, and process the sea cucumbers, these days are the prime period for dried sea cucumber exports to China,” said the third source.

But even though the succulent sea animals are bountiful this time of year, the third source said that quality control issues are giving the North Korean product a bad name.

“North Korea uses an out-of-date dehydration-processing technology and they also use excessive salt to make them weigh more,” said the third source.

RFA attempted to contact the U.N. Security Council’s North Korea Sanctions Committee for comment on this issue, but received no response as of Monday afternoon.