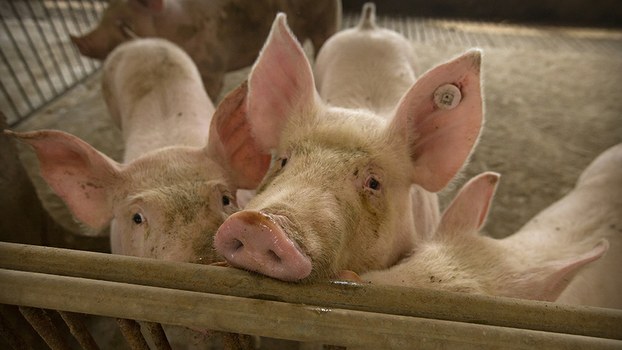 Pigs stand in a barn at a pig farm in Jiangjiaqiao village in northern China's Hebei province on May 8, 2019. Pork lovers worldwide are wincing at prices that have jumped by up to 40 percent as China's struggle to stamp out African swine fever in its vast pig herds sends shockwaves through global meat markets.

According to the latest update from the U.N. Food and Agriculture Organization, China has seen 138 ASF outbreaks since August 2018 and more than a million pigs have been culled since the initial outbreak in Liaoning province, which borders North Korea.

But RFA sources in North Korea say Chinese pork is still being sold in local markets.

“A few days ago I heard from a customs official that North Korea has completely blocked all imports of pork and beef from China to prevent the spread of African swine fever,” said a source from North Hamgyong province in an interview with RFA’s Korean Service on June 2.

“North Koreans prefer Chinese pork to domestically produced pork, because it has thicker layers of meat and fat,” said the source.

“I heard that in some areas, including Pyongyang and Sinuiju, they are trying to control pork sales, but no action has been taken yet in North Hamgyong,” said the source.

The source said that the ban is quite rare, especially since diseases among livestock are common during this part of the year.

The import ban seems to have had no effect on the price of pork, making the source believe that Chinese pork is still getting in.

“The price of pork is between 14 and 15 Chinese Yuan (slightly more than $2) per kilogram, which is the same as before the authorities banned Chinese pork. Even though customs authorities are blocking pork imports from China, there is so much pork being smuggled in,” the source said.

Another source, also from North Hamgyong, said the ban is strange, given that North Korean customs officials generally follow the lead of their Chinese counterparts.

“On the first of the month, pork that was to be brought in from China was quarantined at North Korean customs and sent back. It is unusual for our customs office to block this pork shipment because it didn’t have any problem going through Chinese customs,” said the second source.

“That [particular] pork shipment was to be brought in by a Chinese citizen of Korean descent who is a restaurant owner in Rason,” the second source said.

“He thought there would be no problem going through customs because he regularly brings in pork from China. But the Wonjong customs office did not let it pass through on orders from the Central Committee,” the second source said.

The second source said the restaurant owner was surprised his shipment was held back.

“He has had no problem bringing in pork from China for several years now. Even when swine fever [started] spreading in China, he kept bringing it in. It’s the first time he has been stopped and he’s totally bewildered,” the second source said.

The second source said that the price of pork remains stable despite the ban, and no cases of ASF have been reported in Rason. Even so, residents have become fearful of the disease.

“[They think] African swine fever is highly contagious and has a fatality rate of 100%, but Chinese pork is still being sold at the local markets and no restrictions have been announced,” said the second source.

According to a USDA fact sheet, ASF is deadly only to domestic and feral pigs and does not affect humans. People can, however, spread the virus by coming in contact with the bodily fluids of infected livestock.

According to a source in South Pyongan province, North Korea has not culled pigs in any of its state-run farms where an ASF outbreak has occurred. The pigs instead were supplied to sausage factories at low cost. This has caused a flood of sausages to enter the market, cutting the price of sausage in half.