HRNK Report Examines a 'Lost Generation' of North Korean Children Raised During and After 90's Famine. 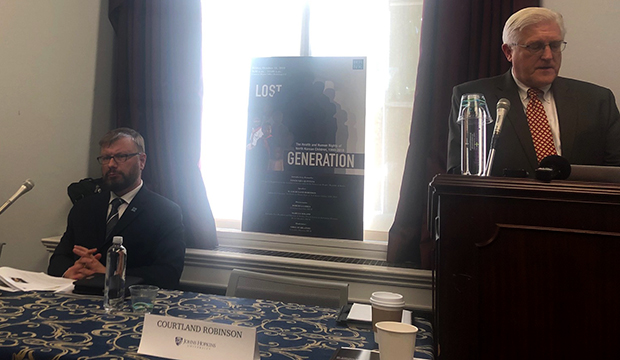 Children who grew up in North Korea over the past 30 years, and particularly those raised during the 1990s famine that killed several million people, continue to suffer from “injuries both physical and psychological,” said a report issued Friday by the Committee for Human Rights in North Korea (HRNK), a Washington-based NGO.

Lost Generation: The Health and Human Rights of North Korean Children 1990-2018, discussed the lasting effects of what North Korea euphemistically called the “Arduous March,” a period of man-made famine in North Korea following the collapse of the Soviet Union, which resulted in as many as 3.5 million deaths.

“I use the term ‘lost generation,’ even though it may not reflect fully one generation of children. It’s multiple generations, but we’re using it to describe a period in time during which we’re including particularly the Arduous March, which is roughly 1990 to 2000,” author Courtland Robinson said during a panel discussion in Washington Friday.

“Those children suffered most egregiously, specifically [in terms of] mortality but also morbidity and abuse and neglect and hardship of many different kinds. Those are the children, not only [that] we lost, but in many respects, if they’re still alive, are bearing wounds and injuries both physical and psychological from the effects of those years,” added Robinson, an associate professor at the Johns Hopkins Bloomberg School of Public Health.

The author and his team analyzed more than 200 reports and data from 61 interviews of North Koreans who grew up during those 30 years and are now in China and South Korea.

Analyzing numerous studies regarding the number of excess deaths, which are those deaths attributable to the crisis, Robinson said that while numbers varied from study to study, they support the same conclusion.

“The implication of these various analyses is that while mortality spiked in the 1990s, with life expectancy dropping from 67.9 [years] in 1993 to 59.3 in 1998, and the infant mortality rate more than doubling from 29.9 in 1993 to 78.1 in 1998, poor living conditions and poor population health in the 2000s thwarted recovery and may have resulted in excess mortality of at least as high as that experienced in the 1990s,” the report said.

“The mortality impacts of this period represent perhaps the starkest measure of this ‘Lost Generation’ of North Korean children,” it added.

“All four studies found that North Korean children were shorter than their South Korean counterparts, with the magnitude of these differences depending on age and gender.”

The health care system in North Korea is recovering after near-total collapse in the 1990s, but remains underfunded, with massive inequalities between urban and rural areas, the study shows.

It documented how in the aftermath of the collapse, a private healthcare sector emerged, further weakening the public system, thereby limiting access for children and mothers without significant means.

Immunization rates during the worst Arduous March years were also down across the board, and infectious diseases were more widespread.

The report also documents experiences of “children outside of family care” and “children on the move,” two terms that describe children who are trafficked or who migrate, who are displaced or orphaned, or who live in the streets.

Interviewees report difficult conditions in orphanages where children were forced to work, fought each other for food, and the younger and weaker ones died of starvation.

Those living on the streets, called kotjebi got by stealing money and food. Some of these children formed groups with leaders. Respondents reported that several female kotjebi had to resort to providing sexual favors to male group leaders in return for food.

“She was 14 or 15 years old, in second or third grade of middle school… she made a relationship in order to get something to eat and [a place] to sleep, not for money. And in kotjebi groups it was possible for her to live with the head of kotjebi by giving sexual favors,” one respondent said.

“Every head of kotjebi had two or three girls,” the same respondent added.

The report recommends that China, South Korea, the United States, and other members of the international community work to end infringements on the rights to food, health, education, freedom from child labor, freedom from arbitrary detention, and freedom of movement within North Korea.

Outside actors are urged them to protect the rights of migrants, refugees and asylum seekers and negotiate with North Korea under a “human rights up front” approach. Most diplomatic efforts with North Korea focus on its nuclear weapons and missile systems, and Pyongyang has long rejected discussions of its human rights situation.

Roberta Cohen, Co-Chair Emeritus of HRNK, said that North Korea itself does not recognize the various categories of at risk children and that humanitarian agencies are not doing enough to help them.

“Particularly troubling is that part of the U.N. House, the U.N. humanitarian agencies operating in North Korea appear to think that they have to follow the North Korean government’s lead in overlooking these categories,” she said.

“Robinson calls these groups the victims of the state’s gross failure to protect human health and wellbeing. But do U.N. agencies even collect information on these groups and inquire of the North Korean government about them?” she asked.

“Perhaps they fear that advocating for such children would antagonize the North Korean authorities and possibly lead to expulsion and would undermine their aid to other children at risk,” Cohen added.

She likened the situation of aid workers in North Korea to the lack of action of the Red Cross on Nazi death camps during World War II, saying that officials were afraid that advocacy for those in the death camps would jeopardize their assistance of POWs. The Red Cross now calls its failure in wartime Germany “the worst defeat in the history of its humanitarian mission.”

“I believe that U.N. humanitarian agencies today have a responsibility to find out as much as possible about the plight of children in acutely vulnerable situations in North Korea and strategize about what they can do to help them,” Cohen said.