Ever hear the one about the communist kittens? The fish who escaped being eaten? Adam and Eve in the Workers' Paradise? These North Korean political jokes hint broadly at the grit and tenacity of citizens living under the world's last surviving Stalinist government.
2008-09-10
Tweet 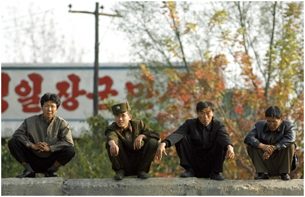 A North Korean soldier (2L) squats with civilians on the bank of the Yalu River in the North Korean town of Sinuiji, 18 October 2006, in this picture taken from the opposite side on the Chinese border city of Dandong.
AFP

“A thing is funny when...it upsets the established order. Every joke is a tiny revolution.”—British essayist George Orwell

“Communism is the only political system to have created its own international brand of comedy,” according to Ben Lewis, the London-based writer and director whose work includes Hammer and Tickle: the Communist Joke Book. Jokes, Lewis argues, were as essential to Eastern European communism as myths were to ancient Greece.

But we wondered, what about North Korea, arguably the most tightly closed and controlled country the world has ever known? Is there humor in the Hermit Kingdom? The answer, according to North Koreans who have fled their native country, is a resounding “yes.”

Following are examples of humor originally broadcast in recent months on RFA’s weekly Korean-language program, "North Korean Humor." Because all communication is tightly monitored and controlled in North Korea, these jokes were collected from defectors and refugees in South Korea and China—but they originated inside North Korea. Some take aim at the Stalinist system, while others play on the discomfort that North Korean men feel with regard to women's expanding roles outside the home, made necessary by North Korea's economic straits.

Like jokes told under previous communist regimes, they offer an outlet for a people oppressed and disenfranchised by their government. But they also reveal an element of North Korean life long hidden from the outside world:

An Englishman, a Frenchman, and a North Korean are having a chat. The Englishman says: “I feel happiest when I’m at home, my wool pants on, sitting in front of the fireplace.”

The Frenchman, a ladies’ man, says: “You English people are so conventional. I feel happiest when I go to a Mediterranean beach with a beautiful blond-haired woman, and we do what we’ve got to do on the way back.”

The North Korean man says: “In the middle of the night, the secret police knock on the door, shouting: Kang Sung-Mee, you’re under arrest! And I say, Kang Sung-Mee doesn’t live here, but right next door! That’s when we’re happiest!”

Chang Man Yong works on a collective farm in North Korea. He goes fishing, gets lucky, and brings a fish home. Happy about his catch, he tells his wife: “Look what I’ve got. Shall we eat fried fish today?”
The wife says: “We’ve got no cooking oil!”
“Shall we stew it, then?”
“We’ve got no pot!”
“Shall we grill it?”
“We’ve got no firewood!”
Chang Man Yong gets angry, goes back to the river, and throws the fish back into the water. The fish, happy to have had such a narrow escape, sticks its head out of the water and cheerfully yells: “Long live General Kim Jong Il!"

Kim Jong Il and Vladimir Putin are having a summit meeting in Moscow. During a break, they’re bored, and they decide to take a bet to see whose bodyguards are more loyal.

Putin is on the 20th floor and calls on his bodyguard Ivan, opens the window, and says: “Ivan, jump!”
Sobbing, Ivan says: “Mr. President, how can you ask me to do that? I have a wife and child waiting for me at home...”

Putin sheds a tear himself, apologizes to Ivan, and sends him away.

Out of the mouths...

At High School No. 1 in Pyongyang, a girl brags to her teacher about the cat she’s got at home: “Our cat has just given birth to seven kittens. All of them just stick close to their mother, they feel really comfortable, and sleep all the time. They’re all true communists.”

A few days later, the teacher asks the girl: “Are the communist kittens at home growing up nicely?”

Looking at the sun and saying it is the moon

Child: “Mom, I’m hungry. I want rice.”
Mother: “I’m sorry, child. There’s no rice left.”
Child: “No rice! Why is there no rice? Our kindergarten teacher told us that if General Kim Jong Il points his finger to sand, it turns into rice. So, why is there no rice in our house?”
Mother: “Well, that’s a lie. No, what I actually meant to say was that’s a matter of deeply rooted belief.”
Child: “Mom, what’s deeply rooted belief?”
Mother: “Well, it’s a lie you’re supposed to believe.”

A woman living in North Hamgyong province comes back home after a hard day at the open market. While she was working hard, the husband spent the whole day at home, daydreaming. As soon as she returns home, they start talking, and the husband says: “Sweetheart, I’d love to go to some place I’ve never seen before, and do something I’ve never done before…”

The wife retorts: “That’s a great idea. Go to the kitchen and wash the dishes!”

Chinese, Russian, Japanese, American, and North Korean police officers gather and decide to assess their investigative capacity. Under the watchful eye of their supervisors, each team gets a mouse, then lets it loose, and the mouse runs up a big mountain. The winning team is the one that manages to catch and bring back the mouse in the shortest time.

The Chinese police employ human wave tactics, combing every square inch on the mountain in their thousands.

They capture and return the mouse after only one day’s search.

The Japanese policemen use a smell detector, and after only half a day, they detect the mouse hole, search it, catch the mouse and bring it back.

The Russian cops send a robot equipped with a heat-seeking device up the mountain. The robot locates all the mammals on the mountain and after only three hours the Russians capture and bring back the mouse.

The only ones left now are the American and North Korean police officers. The Americans use a satellite signal device to locate the mouse, and then send in a mechanical gadget that looks like a snake gliding up the mountain.

The gadget gets into the mouse hole, catches the mouse and brings it back after only one hour.

The North Koreans are last. Although the supervisors are watching, none of them makes a move, there is no brainstorming, and no one comes up with a plan of action, nothing at all. After only about 10 minutes, a few North Korean police officers show up dragging a dog before the supervisors, saying they’ve found the mouse.

All the supervisors are puzzled: “What are you doing? It is not a dog you were supposed to catch! Weren’t you supposed to catch a mouse?” Instead of answering, the North Korean cops drag the dog through the dirt and repeatedly kick it in the ribs. The sobbing dog suddenly starts to talk: “Stop, stop, please stop! Yes, I confess, I’m a mouse! I’m a mouse, please concede that I’m a mouse, or else they’re going to kill me!”

Professor: “Comrade students, how many economic-political systems are there in the world?”

Student: “There are three such systems: The capitalist economic-political system, the North Korean socialist economic system, and the Chinese eclectic system.”

Professor: “Then, among these three systems, which one is the greatest?”

Student: “Well, it might be rather difficult to answer that question.”

Professor: “What kind of an answer is that? There is only one clear answer! Our style of socialist economic-political system is the greatest, as this is the system that’s destined to conquer the entire world and spur eternal economic development!”

Student: “Professor, that is great, indeed… But if our system takes over the world and all of the other countries and economic-political systems, then whom are we going to ask for food aid?”

A member of the Chinese Communist Party goes to study in North Korea, where he gets to learn about juche, the official state ideology of North Korea and the political system based on it.

The Chinese Communist Party member wishes to let his friends back home know what life in North Korea is like.

However, he knows for sure that all the letters he sends are opened by the North Korean authorities, so he thinks of a way to bypass censorship.

The Chinese decides to write words meaning precisely what they say in blue ink, words conveying neutral meaning in black ink, and words intended to convey the very opposite meaning in green ink.

After a while, his friends back home in China receive a letter from North Korea. The letter was written entirely in black ink, meant for words carrying neutral meaning.

The conclusion they draw is that North Korea is not as good as the North Korean authorities’ propaganda says it is, and it is not as bad as the critics of the North Korean regime say it is. However, at the bottom of the letter, they come across a note from their friend: “My friends, I apologize. Green ink is unavailable here….”

At an art museum in Europe, an Englishman, a Frenchman, and a North Korean stand before a painting of Adam and Eve holding an apple in the Garden of Eden.

The Englishman says: “The man has something tasty to eat and is eager to share it with the woman. Based on that, I would conclude that they’re rather obviously English…”

The Frenchman says: “I disagree. They’re walking around entirely naked, so they must be French…”

The North Korean says: “There is no doubt in my mind that they’re North Korean. They have no clothes to wear, barely anything to eat, and they still think they’re in heaven!”

These 'North Korean' jokes are basically 1980s West German jokes about the GDR, only that Hanses and Helmuts are replaced by Sung-Mees and Mang-Yongs. These are clearly made up in Seoul by some victim of paid humanitarian education and social networks. Very bad try, not convinced at all.

That joke about Chinese, Russian, Japanese, American, and North Korean police officers is an old one. Years ago I heard essentially the same joke in which the CIA, FBI and LAPD search for a rabbit in a forest. Even the punch line is the same: a bear is dragged from the forest screaming "I confess, I'm a rabbit."

Thanks God!! I am neither from North Korea nor from Johannesburg.