U.S., South Korea Renew Call on North to Give Up its Nuclear Weapons 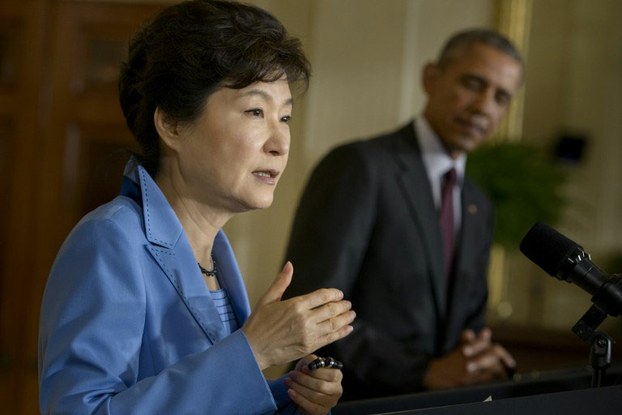 U.S. President Barack Obama and visiting South Korean President Park Geun-hye said Friday they were open to engaging with North Korea but remained firm that they would never accept the North as a nuclear state.

A joint statement released by the two allies at their White House summit also vowed to “ensure accountability for human rights violations” by the dynastic authoritarian regime of Kim Jong-un, whose vast prison camps are the focus of a major U.N. enquiry.

"Today, President Park and I are reaffirming our nations will never accept North Korea as a nuclear weapons state," he added.

Obama held out the prospect that Washington, as it did recently with a landmark nuclear deal with Iran, would engage the North if it committed to denuclearization.

"At the point where Kim Jong-Un says we are interested in seeing relations and denuclearization, I think it's fair to say we will be right there at the table," he said.

Reinforcing Obama’s message, Park said that North Korea’s Kim, the third generation ruler of the isolated state, must be willing to give up a nuclear program. The North has conducted three nuclear tests since 2006.

"North Korea has to come to its own conclusion that it is genuinely willing to give up nuclear capabilities and become a full-fledged member of international society," Park said.

The joint statement issued by the allies underscored “our commitment to our common goal, shared by the international community, to achieve the complete, verifiable, and irreversible denuclearization of North Korea in a peaceful manner.

“North Korea’s continuing development of its nuclear and ballistic missile programs is an ongoing violation of multiple UN Security Council resolutions and is contrary to North Korea’s commitments under the 2005 Joint Statement of the Six-Party Talks,” it said, referring to regional diplomatic efforts to denuclearize the North.  Those talks have been stalled since 2009.

On human rights, the statement said that Washington and Seoul “join the international community in condemning the deplorable human rights situation in North Korea as documented in the 2014 UN Commission of Inquiry report.”

The Commission of Inquiry (COI) compiled exhaustive evidence of widespread abuses in North Korea including murder, starvation, torture, and other crimes—many of these committed in the country’s remote prison camps.