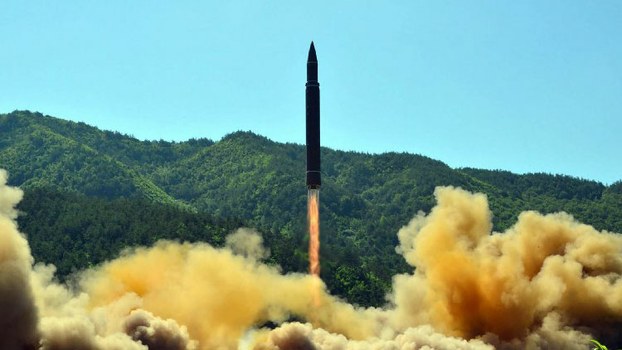 The military situation on the Korean peninsula has become tense again in the wake of North Korea’s test of Hwasung-14, a purportedly intercontinental ballistic missile (ICBM), on July 4. As North Korea crossed the ‘red line’ that the US government drew in terms of the North’s military provocations, all eyes are on the possible US response. Changsop Pyon of RFA’s Korean Service interviewed Dr. Andrei Lankov on Pyongyang’s motives and the implications of its ICBM test on the troubled US-DPRK relationship. Lankov, a professor at Kookmin University in Seoul, South Korea, is a specialist in North Korean affairs and author of several books on North Korea including The Real North Korea: Life and Politics in the Failed Stalinist Utopia (2013).

RFA: North Korea claims to have test-launched its first intercontinental ballistic missile (ICBM) on July 4. If that’s true, what do you think is Pyongyang’s motivation behind such an ICBM test?

Lankov: As a matter of fact, it has been regarded as a matter of time that North Korea would have the capability to strike the US continent. Although North Korea’s claim of ICBM test might not be true or may have been overstated, it is almost certain that the North would be able to develop an ICBM that can strike the US continent within several months or years. What is Pyongyang’s purpose? I think in the short term they have two purposes: one is they want to have deterrence against a possible US attack, and the other is they can ignore the US pressure. In the long-term, however, they still want to absorb South Korea by force, so Pyongyang thinks their ICBMs can dissuade the US from intervening in a military crisis on the Korean peninsula. They wanted to (absorb South Korea) back in 1950, but couldn’t because of the US military intervention. At present, however, North Korea is more focused on the short term purpose, namely securing a deterrent power against the US, as they have fears of a possible US attack. They believe that in the short term it is their nuclear weapons and ICBMS tipped with nuclear warheads that can deter a possible US attack.

RFA: Pyongyang’s ICBM test put its ally China on the spot. Do you think China can apply maximum pressure such as suspension of oil supplies to North Korea?

Lankov: I don’t know, but I’m a bit skeptical about that. China’s attitude toward North Korea is double-minded. One the one hand, China doesn’t welcome North Korea’s nuclear development at all. Letting the North go nuclear means South Korea, Japan and even Taiwan could go nuclear, too. I think there is a possibility for China to take an extreme measure against the North such as cutting off oil supplies, but the possibility is very dim, I believe. Although China is very critical of North Korea’s nuclear development, they regard any internal crisis or chaos, even regime collapse in North Korea as more of a threat than a nuclear Korea. If China cuts off oil supplies to North Korea completely, you will see their economy start to crumble, and there is a real possibility of the North Korean regime collapsing. Today China virtually ignores North Korea, but at the same time they feel the North is a very important buffer state.

RFA: Despite North Korea’s ICBM test, something the US has regarded as a red line, the Trump administration has few good options, but has not taken the military option off the table. Do you think the US can launch a preemptive strike against the North?

Lankov: Well, it might be possible, but I’m skeptical about its feasibility. From the US viewpoint, such an attack is too dangerous. North Korea has countless ‘hostages,' namely the South Korean people. If the US starts a preemptive attack, the North will most likely strike Seoul, South Korea’s capital, and its surrounding areas. In that case, the Korea peninsula will turn into a war ground once again. This would not be desirable from the US viewpoint, and another Korean war will threaten the national interests of the United States gravely.

RFA: Faced with North Korea’s ICBM threat, what kind of response do you think the US and its allies should come up with?

Lankov: In the short term, there are not any good options that the US, South Korea, Japan, or even China can take. In the long term, however, I think there are two options. One is for South Korea to strengthen its military alliance with the US further, and the other is for South Korea and Japan to arm themselves with nuclear weapons, which would bring about very dangerous results. As for a secondary boycott against Chinese businessmen or companies trading with North Korea, it is almost certain that the United States will apply it.  But I’m skeptical about a US preemptive strike against the North. It’s possible that the United States can launch a preemptive strike against the North. China can cut off its oil supplies to the North. But the consequences are much more dangerous than we think. As for sanctions, almost all the available sanctions have been applied against the North to the point that there are no more effective ones left. Although China participated in multiple sanctions against North Korea, it has not done so fully and completely. Despite numerous sanctions against North Korea, however, its economic situation is not as bad as we think.

RFA: As the sanctions are failing, the only option at the moment seems to be dialogue and engagement. Given North Korea’s further provocations with the ICBM test, don’t you think any hope for dialogue between the US and North Korea is gone?