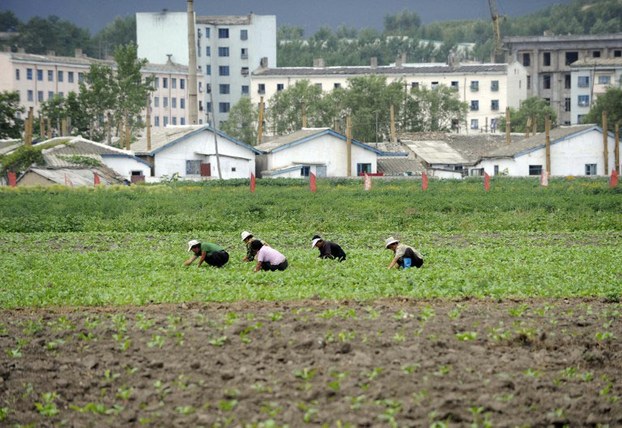 Farmers tend their field near Rason, North Korea, in a file photo.

Massive flooding in North Korea has left potato fields in the country’s northern provinces under water, with crops left to rot as farmers wait under government orders to begin harvesting this weekend, North Korean sources say.

Heavy rains beginning in late July have washed out large areas of Yanggang and North Hamgyong provinces along the Tumen River bordering China, submerging farms and destroying bridges and roads, sources in the region told RFA’s Korean Service this week.

“The area has still not recovered,” one source said in Yanggang province told RFA, speaking on condition of anonymity.

“In addition, the land is too muddy for water to drain, making it impossible to pick potatoes,” the source said.

Central government authorities have told farmers in Yanggang to begin autumn harvesting on Sept. 10, and farmers “are in a rush” to start, but with heavy rains ending only on Sept. 5, the fields are in no condition to allow the work to be done, he said.

Farmers cultivating individual paddies outside the system of collective farms have already begun picking vegetables from their fields, though, the source said.

In North Hamgyong province, also bordering China, Yeonsan and Musan counties—both known for producing potatoes—have also been ordered to begin their harvest on Sept. 10, a source in the province told RFA.

“However, farmers are concerned that the land will not dry up in time for the work to begin,” he said.

“Potatoes will rot if they are picked while still wet,” the source said.

Individual farmers can briefly keep harvested potatoes in yards to allow moisture to evaporate before they are stored, but collective farms don’t have the facilities to dry potatoes like this on the scale they would require, he said.

Storm-damaged roads and bridges are also unavailable now to transport harvested crops, the source said, adding that students and other residents who would normally help with the harvest have now been assigned other work.

“They are all busy repairing damage from the floods," he said.

“This will make it difficult to anticipate how many people will be available to help with the harvest."